Microsoft Sends Cortana to Far-Flung Corners of the Earth 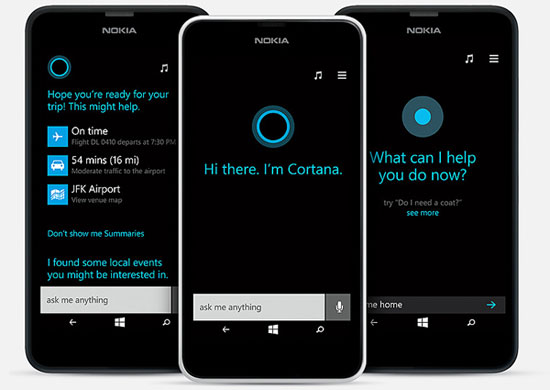 Microsoft is preparing to debut an update to its Windows Phone 8.1 operating system, which includes expansion of its Cortana personal assistant availability to more regions.

The update introduces Cortana to China and the UK in beta form, and Canada, India and Australia in alpha mode.

Cortana is only just starting to make waves in the market, several years after Apple debuted Siri, while Android’s Google Now has been available for some time.

Microsoft is positioning Cortana as a highly customizable personal assistant. The Notebook feature, for instance, stores personal information like a user’s interests, reminders, location data, and contacts to learn usage patterns and behaviors. Cortana is designed to offer assistance that is more closely tailored to a user’s individual needs and preferences.

“What I like about Cortana is that they have your entire Notebook of settings you can put together, saying ‘I like these sports, I like these teams, I like these topics and subjects — these are the list of people that mean the most to me,'” said Ramon Llamas, mobile phones and smartphones research manager at IDC.

“We’re moving beyond the entire [concept of] ‘go execute a task for me,’ because that’s what Google Now and Siri have done remarkably well. Now we’re doing two things: We’re making it more personal, and we’re making it more contextual,” he told TechNewsWorld.

“Siri was a game-changer, raising awareness and use of a voice-based mobile assistant for Q&A, communications and commerce,” said Dan Miller, Opus Research founder and senior analyst.

“Cortana has grown out of search and device control. Microsoft will be smart to build on the market conditioning that Apple with Siri and Google with Google Now have already paid for,” he told TechNewsWorld.

“It will do so by closely integrating natural language input to a broad range of Windows-based devices — ensuring a consistent user interface that includes voice, keyboard, keypad and all the gesture-based activity incorporated in Xbox and Kinect,” Miller predicted.

“Where the Windows approach differs from Google or Apple falls in line with Microsoft’s typical strategy for product development,” said John Feland, CEO and founder of Argus Insights.

“It has been said that Apple designs experiences so there is one good way to do most things, while Microsoft provides users with multiple methods to do or control everything on their devices,” he told TechNewsWorld. “Cortana is no different in that Microsoft gave users the ability to tweak Cortana to what she knows about you — to how she chooses to interact with you.”

The Chinese version of Cortana, nicknamed “Xiao Na,” is broadly similar to the versions available elsewhere, though it has some additional features owing to different expectations and needs.

For instance, Xiao Na has a fresh visual appearance, animations and sounds, and can understand and communicate in Mandarin. It also offers air quality information, driving restriction information, and the option to track celebrities and TV shows. Additionally, Xiao Na lets users look up words in English for those using the language.

Meanwhile, the UK version of Cortana has UK spellings and pronunciations, with Bing offering data on the country’s sports teams, travel conditions and stocks. Those in Canada, India and Australia will be able to access the U.S. and UK versions of Cortana.

“Recognizing meaning and intent of users requires a certain amount of training and experience. These types of interfaces improve over time, with lots of input from users. Phased rollout makes perfect sense,” he said.

“This goal dictates a premeditated strategy to the regional, and in some cases, country level. Most important is that the voice assistant be of value to the user several months after purchase. If the buyers find the function too novel and gimmicky, it risks not only taking up space on the device but decreasing the value that the OS delivers,” he told TechNewsWorld.

Microsoft also has updated Cortana in the U.S., adding new personality traits, natural language situations, and snooze options for reminders. Users also can connect to Cortana through their car’s Bluetooth connection, as long as the car is integrated with the phone’s contact list. Drivers will need to say “Call Cortana” to use it behind the wheel.

“On one hand, you wouldn’t think this voice assistant would be a reason to buy a phone — but on the other hand, it is an important part of the bigger picture, and customers buy the whole pie,” he remarked.

“Going slow with Cortana has let Microsoft learn from the mishaps and masterpieces produced by Apple and Google,” Argus Insights’ Feland suggested.

“Bringing in smarter push/widget notifications from Google Now and avoiding the language gaffes of Siri puts Microsoft in a position of at least satisfying Windows Phone users — though beyond the novelty of Cortana’s Halo fame, there is little to drive delight and increased adoption.”

Outside of Cortana, Microsoft has made a number of updates throughout the smartphone system. Live Folders lets consumers organize apps within folders. Xbox Music is said to deliver better performance while offering new features like a quick-play option to repeat recent listening activity.

“If you take a look at the sum total of Live Folders, swipe-from-the-top for notifications, and Cortana, these sound like features that other platforms have had — so I look at this as a kind of catch-up for Microsoft,” IDC’s Llamas said.

“They’re doing it in a way that plays to their strengths,” he added.

“Cortana is an attention-getter, for sure,” Miller said.

“The impact on sales will be hard to quantify but is bound to be positive. In a way, it represents Windows Phone’s parity with the likes of iPhone 5 or 6 with Siri, and a number of Samsung or other Android-based devices that include natural language input and gesture,” he observed.

“Adoption is more style- and application-driven. Inasmuch as Cortana becomes part of popular applications on Windows Phones and other Windows-based platforms, it should have a positive effect,” Miller predicted.

“We expect that new markets, such as China, will be of greater impact to Windows Phone than some of the entrenched and highly competitive smartphone markets such as the U.S. and UK,” ABI’s Orr noted.

“In a market such as China, the competitive landscape is quite different. For example, Google is not as prominent, and its search engine capabilities that power Google Now voice are severely limited. Similarly, Apple is fighting patent infringement claims by China’s Zhizhen Network Technology related to voice-enabled Chinese applications and prior patents issued that may be violated by the Siri service.”

Microsoft is making the update available to developers — and consumers willing to take a risk on developer builds — starting next week. The update will be broadly available to consumers in the coming months.