Microsoft Rolls Its Own Linux Distro

Microsoft on Thursday announced that it is building its own Linux distribution to manage cloud networks.

Cloud users have many excellent switch hardware platforms to choose from, she noted. Healthy competition exists between many vendors, which drives innovation, increases speed and reduces costs.

The challenge for maintaining cloud and enterprise networks “is integrating the radically different software running on each different type of switch into a cloud-wide network management platform,” Subramaniam said.

The Azure Cloud Switch is a Linux-based cross-platform modular operating system for data center networking. It provides a much faster way to debug, fix, and test software bugs, Subramaniam pointed out.

It gives Microsoft the flexibility to scale down the software and develop the features required for its data center and networking needs.

ACS provides a foundation for integrating the software that runs networking hardware, such as switches. Its use of the switch abstraction interface, or SAI, allows sharing of the same software on hardware from multiple vendors.

Traditional switch software is built to accommodate different customers with an assortment of scenarios and feature requests. With ACS, on the other hand, feature development is geared toward Microsoft’s specific priorities.

That specificity allows ACS to have a lean software stack that is focused solely on Microsoft’s Datacenter Networks.

Because it is modular rather than monolithic, validation is easier, and there’s less probability of hidden, high-priority bugs. There’s also less lag for new feature requests, according to Subramaniam. 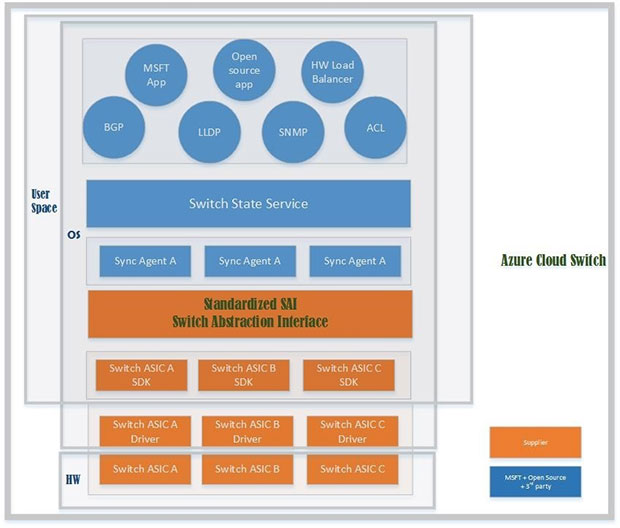 Applications include the open source Quagga, as well as built-in Microsoft-specific tools that could support an entire configuration management system, such as Autopilot, or a feature like SWAN (structured wireless-aware network), as well as third-party applications.

Why build a Linux distribution rather than rely on available proprietary software?

“Microsoft developing its own Linux-based network integration layer for Azure is an endeavor that targets Microsoft’s ability to be a cloud,” said Pat Kerpan, CEO of Cohesive Networks.

“With its Linux-based ACS, Microsoft is making an effort to improve [its] ability to own, operate, manage and potentially federate the Azure cloud,” he told LinuxInsider.

Welcome to Our World

It is an improvement in being a cloud as opposed to an improvement in building a business in the cloud, Kernan explained. “In short, this announcement is a sign that Microsoft is working on improving the underlying network infrastructure in Azure.”

The company faces greater risks now than it might have, had it embraced open source sooner, suggested Mark Jamensky, executive vice president of products for Embotics.

“The risks for Microsoft are that they are late to market with a solution and are not necessarily a trusted vendor in the routing space,” he told LinuxInsider.

Even though software-defined networking solutions are still in their early adoption phase, it’s clear that they deliver terrific network management and security advantages in the data center, Jamensky added.

Therefore, “the risks for Microsoft not coming to market with an offering in this space,” he said, “were greater than doing nothing.”