Microsoft on Thursday released Windows 7 XP Mode to manufacturing and said the final release will be generally available Oct. 22, as scheduled. 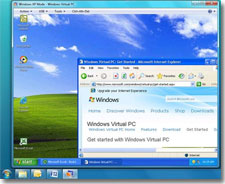 It will also help SMBs migrate safely to Windows 7.

The final release of Windows XP Mode will be available from the Microsoft Download Center Oct. 22, Brandon LeBlanc wrote in the Windows 7 blog. OEMs will be able to offer Windows XP Mode based on their manufacturing schedules, he said.

While Microsoft expects many XP apps to be compatible with Windows 7, Windows XP Mode is meant to serve as an added safety net so SMBs can migrate and run Windows 7 without any roadblocks, LeBlanc said.

Microsoft is working with OEM partners to include Windows XP Mode preinstalled in new PCs, LeBlanc said. It is also working with antivirus and security software vendors so their products will be supported in Windows 7 XP Mode in addition to running on the Windows 7 operating system. At least two vendors — Kaspersky and Symantec — have confirmed their applications will run both on the OS and in Windows 7 XP mode.

In order to run Windows 7 XP Mode, users will need to have a copy of the Windows 7 Professional, Ultimate or Enterprise edition. They will also need an additional 1 GB of RAM and an additional 15 GB of available disk space.

Also, users will need computers that have processors capable of hardware virtualization with AMD-V or Intel VT turned on. These processors are used in new Intel Core 2 processors with Intel vPro technology and all AMD CPUs except the Sempron, LeBlanc wrote in an earlier Windows 7 blog post.

Alternatively, users will need to install Windows Virtual PC virtualization technology. For this, they will need a 400 MHz Pentium-compatible processor running at 1 GHz or faster and 35 MB of disk space.

Before installing Windows 7 XP Mode, users must confirm their PCs can run it. Hardware virtualization is not available in all PCs, Microsoft said. In PCs where it is available, it is turned off by default.

To check whether their PCs’ CPUs support hardware virtualization, users can download, install and run either the Intel Processor Identification Utility or the AMD Virtualization Compatibility Check Utility.

Next, they have to check whether their PCs’ BIOS supports hardware virtualization and, if it does, whether that feature is turned on. Microsoft has instructions for checking PCs from Dell, HP and Lenovo ThinkPads.

Microsoft has a Windows 7 compatibility mode Web site under construction.

With the recession biting deep, will businesses take the plunge and upgrade to Windows 7 even if XP Mode makes the transition easier?

That depends, said Marty Kacin, cofounder, president and chief technology officer at systems management appliance vendor KACE. “The SMB sector has a variety of customers, each with their own situations,” he told TechNewsWorld.

“The rollout of a new operating system, whether you’re a small, medium-sized or large business, is no easy task,” he said. “But Microsoft and their largest distributors and partners like Dell are providing more cost-effective and compelling technology to customers that may lead those willing to take the risk of upgrading to do so.”

Such customers will consider the return on investment (ROI) of purchasing new technology to be worth more than the money saved by holding on, Kacin said. “We at KACE are seeing people shopping for good opportunities and realizing that there’s some interesting ROI at the software and hardware levels that are available and worth investing in.”