A strategic partnership with Microsoft was announced Tuesday by General Motors and Cruise aimed at speeding up the commercialization of shared self-driving vehicles.

In addition, Microsoft will be joining GM, Honda and some institutional investors in adding US$2 billion to Cruise’s coffers, bringing the value of the shared self-driving vehicle company to $30 billion.

“The companies in this sector are going to need a long runway before they generate enough revenues to be self-sustaining so another $2 billion in the bank for Cruise is the single most important aspect of this,” Sam Abuelsamid,principal analyst for e-mobility at Guidehouse Insights, a market intelligence company in Detroit, told TechNewsWorld.

“GM and its investors are trying to scare off competitors,” maintained Roger C. Lanctot, director for automotive connected mobility at Strategy Analytics, a global research, advisory and analytics firm.

“This is an intimidation game,” he told TechNewsWorld. “There are dozens of robotaxi wannabes, but there are also shuttle bus operators — like Beep — throughout the world building revenue-generating businesses around autonomous vehicles operating within narrowly defined, geo-fenced or fixed routes.”

“The $2 billion investments buys Cruise more time but it will not magically create a functioning, revenue-generating service,” he said.

Mike Ramsey, a vice president and analyst for automotive and smart mobility at Gartner found it interesting that Microsoft is making a long-tern commitment to a company that’s potentially a customer for its wares.

“Microsoft provides services — like a giant cloud computing offering — that is used to develop these self-driving vehicles,” he told TechNewsWorld.

However, both companies may benefit from the new partnership.

“For Cruise, it may mean greater access to talent and resources from Microsoft; and for Microsoft, it helps to create expertise in high-performance computing related to autonomy, where one of their biggest competitors — Google — already has an in-house AV company in the form of Waymo,” he said.

Abuelsamid explained that all the companies in this sector are going to have to use cloud providers, whether it be Azure, AWS, Google Cloud or Baidu in China.

“They need the cloud platforms during the R&D phase to handle all the data they’re collecting from their test vehicles, to do simulation, to do AI training and all the other things they have to do,” he said.

“Longer term,” he continued, “if they do start to commercialize, they’re going to need cloud platforms to do fleet dispatch and other things. It doesn’t make sense for these companies to build their own clouds.”

“Once you commercialize it and decide to go to multiple cities and multiple countries, scaling that platform is really hard,” he added. “It’s something that companies like Microsoft, Google and Amazon know how to do.”

Lanctot acknowledged that cloud resources are required to develop and launch an autonomous vehicle-based robotaxi operation, but added that it’s not immediately clear that Azure has any extraordinary advantages over competing alternatives such as Google or AWS.

“While I’d be inclined to suggest that Microsoft has more to gain in desperately needed credibility in the automotive space than GM — the $2 billion investment has clearly juiced GM’s stock.”

“So Microsoft gains automotive cred and GM gets a stock boost,” he continued, “but it doesn’t really move the needle on advancing autonomous vehicles or the actual creation of a robotaxi service.”

“Microsoft has some useful cloud-based tools to support automotive vehicle development and operation, but the hurdles standing in the path of AV robotaxis do not reside in the cloud,” he added. “They are right here on terra firma.”

He added that robotaxis do not offer any clear benefits to consumers.

“If the goal is to deliver a robotaxi — this is a replacement of an existing and perfectly adequate and affordable solution,” he said. ” It is not demand driven — unless they want to make it free.”

“Given the $250M quarterly burn rate, I don’t see how they will ever be able to offer robotaxis at a competitive price — at least not in this decade,” he added.

Cruise CEO Dan Ammann noted in a statement that his company’s mission to bring safer, better, and more affordable transportation to everyone wasn’t just a tech race but also a trust race.

“Microsoft,” he said, “as the gold standard in the trustworthy democratization of technology, will be a force multiplier for us as we commercialize our fleet of self-driving, all-electric, shared vehicles.” 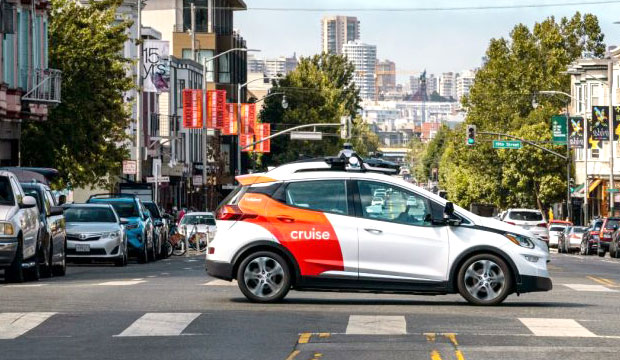 Cruise self-driving test vehicle on the streets of San Francisco

Abuelsamid explained that before anybody is going to want to ride self-driving vehicles, they have to trust that they’re safe.

“These vehicles are all connected,” he said. “They have to be connected in order to dispatch them and provide software, map and traffic updates.”

“Any device that’s connected has attack surfaces for bad actors,” he continued. “If you’re going to be successful in this business, people have to trust not only the core technology in the vehicle, but that the system is secure and bad actors can’t take control of these vehicles and do anything nefarious with them.”

“Microsoft is generally considered a trustworthy company, a good partner for this sort of thing,” he added.

Lanctot, though, doesn’t believe trust is an issue.

“Existing shuttle operators have demonstrated that consumer acceptance of driverless operation is really no big deal,” he said.

“A bigger deal is the level of tolerance within cities and regulators for driverless vehicles clogging up already heavily trafficked city streets seeking passengers,” he explained. “It’s a business model issue.”

GM Chairman and CEO Mary Barra praised Microsoft in a statement, noting the high tech company will help drive the auto industry to a future with zero crashes, zero emissions and zero congestion.

“Microsoft will help us accelerate the commercialization of Cruise’s all-electric, self-driving vehicles and help GM realize even more benefits from cloud computing as we launch 30 new electric vehicles globally by 2025 and create new businesses and services to drive growth,” she said.

GM won’t be alone in flooding the market with EVs, which isn’t good news for the market leader, Tesla.

“Tesla been the dominate player the last several years, but it’s been in market that’s fairly sparse, without a lot of offerings,” explained Abuelsamid.

“In the next 12 to 24 months, there’s going to be a lot of new EVs coming to market from almost every automaker,” he said.

“Tesla’s going to continue to grow,” he continued, “but their market share of EVs is almost certainly going to decline.”

“Their market share in Europe declined significantly in 2020 because of the introduction of a number of new models from Volkswagen, Mercedes Benz and Audi,” he added. “That’s going to continue to be the case going forward. They’ll probably grow sales, but they’re going to have a smaller slice of a growing pie.”