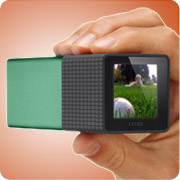 Lytro, the new darling of the digital photography world, has added a perspective shift feature, plus nine filters to create effects in Living Pictures. The software update will be available on Dec. 4, and will work even for photos previously taken.

Because the Lytro camera captures a wealth of information — including light fields — that is processed when the photo is viewed, it adds greater flexibility to photo editing.

“We introduced the first major light field capability, the ability to refocus a picture after it is taken,” said Eric Cheng, Lytro’s director of photography.

“The next major light field feature from Lytro is Perspective Shift, which allows you to make the picture all-in-focus and interactively change your point of view in a Living Picture after you’ve taken it — left, right, up, down and all around on a computer or mobile device,” he told TechNewsWorld.

The new advances will work with cameras already in stores and in consumers’ hands. The software update makes changes to how photos are edited on a computer, tablet or mobile phone — and when posted on blogs and social networking sites.

“Lytro could now mean people can no longer take a bad photo, due to the ability of being able to focus pictures after the shot is taken,” Pamela Tufegdzic, senior analyst of consumer electronics at IHS iSuppli, told TechNewsWorld.

Since its introduction, Lytro has been viewed as a game changer for the photography industry. If the company continues to add new features to the camera through updates, it makes an even bigger impact on a market where cameras are refreshed with new models every few months — and once a consumer buys a camera, the technology quickly becomes outdated.

“Lytro is revolutionary, as no other camera allows consumers to focus pictures after taken and then to be able to share that creativity online. I think the big difference is it lays out a different opinion of how we think about digital still images,” said Tufegdzic.

While the technology is groundbreaking, some people have a hard time accepting the form factor. The Lytro looks like a large viewfinder, with not much else. It may take some time — and possibly some new product designs — to get over this hurdle.

The technology is compelling for early adopters and relatively affordable; however, product design and resolution are still issues.

“[They need to] figure out how to provide a higher-resolution output and put the thing into a more pleasing form factor,” he told TechNewsWorld.

Lytro seems to be working on the software end more than the form factor, though. Perspective Shift is just one of the new features announced this week.

The company added nine Living Filters that can create different effects in a Living Picture any time the photo is open on any device or location — a mobile phone, tablet, blog or social network, for example. This means that the photographer can post the photo, then let others play with the image and add the filters or change the perspective.

Glass puts a sheet of virtual glass into the screen so objects in the foreground remain in focus while the background appears as if it’s behind frosted glass. A Line Art filter reduces the scene to grayscale outline and produces more detailed lines when the image is refocused.

Film Noir creates a moody, stylized black and white look to pictures and leaves one object with color to add detail. Those who grew up in the 70s will appreciate the 8-track filter that adds an aged, vignette look.

“What I think we’ve seen in the past year or two is a real first for growing interest among consumers who use filters for their photos,” Charles King, principal analyst at PundIT, told TechNewsWorld.

The use of filters has been spurred by mobile services such as Instagram, noted King. “I think that end users will find this intriguing and adorable.”

The Lytro camera is available at several major U.S. retailers, including Target, Best Buy and Amazon. The camera is also available internationally at retailers in Australia, Canada, Hong Kong and Singapore. The next hurdle for Lytro may just be awareness. The ability to post to social networking sites and elsewhere on the Web to let friends play with the Living Pictures will help build buzz.

“The technology following the photo to Facebook or the Internet, allowing users to change the perspective without any software, is key — and a unique feature that should help attract more consumer interest,” said Tufegdzic.

“Consumers want camera capabilities to be easy to work with,” she continued, and “Lytro is making the editing process seamless to users … eliminating the need of any special software. As Lytro indicated, they are bringing Living Pictures to life in a new way that I think consumers will have fun with.”