Lone Wanderers: No Warmth of the Sun for Some Planets

Roaming planets, untied to a solar system or stellar orbit, were recently found by a team of astronomers, according to a report in Nature. 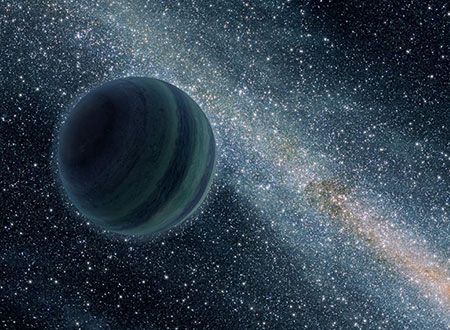 This artist’s conception illustrates a Jupiter-like planet alone in the dark of space, floating freely without a parent star.(image courtesy of NASA)

The original goal was to look for unknown masses in the galaxy’s composition that they believed could be brown dwarfs or other material, Bennett, who has been working on some of the observations since 1990, told TechNewsWorld.

As the investigations continued and became more advanced, however, they began to entertain the idea that the masses they found were in fact planets about the size of Jupiter.

Unlike the planets we recognize in our solar system like Mars or Venus, which orbit around our sun, these planets seem to be unattached to a stellar path.

“The observations suggest that close planet interactions scatter planets out of their systems. It could be that some of these planets are very far out in their planetary systems, but the indication is that probably most of them are not bound to a star,” said Bennett. It could be that there are more planets in the solar system that were also ejected, he added.

Floating throughout the Milky Way Galaxy, these planets — researchers identified about 10 of them — were probably formed when they were “ejected” from different planetary systems following a violent spatial encounter.

The idea of planets kicked out of their solar systems isn’t new. In fact, in our own system, the Nice model — a possible scenario for our planetary formation — suggests that Jupiter, Saturn, Uranus and Neptune did some rearranging and migrating of their own during their evolutionary stages. But this is the first time observations and scientific data can back up the idea of these lonely planets.

Researchers agree the discovery could change the way they imagine the origins of solar systems.

“In general, this discovery will change the idea of how the planetary system forms,” Sumi told TechNewsWorld.

In the past, the idea of planetary formation was based off what scientists learned about our planet’s formations and its orbit around the sun. With the new data, however, researchers can begin to wonder if “ejected” planets are more abundant in space than previously thought.

“This changes our whole perspective of how planets relate to the population of other solar systems out there. Solar systems like Earth are maybe the exception rather than the rule,” said Mike Malaska, solar system ambassador for NASA/JPL.

Follow-up investigations such as NASA’s WFIRST are currently being planned to gather more information on galaxy formation. Additional projects are even undergoing right now, like the Kepler Spacecraft, which its website calls a “Search for Habitable Planets.”

Another craft, the European Space Agency’s COROT, is also in orbit searching for planets outside Earth’s solar system.

Researchers and space enthusiasts are excited about the endless possibilities this discovery could lead to.

“Up until now we used to think we had a pretty normal solar system,” Malaska told TechNewsWorld. “Then we start looking at everything and a discovery like this and think, wow, there’s a lot out there, now there’s endless possibilities about other solar systems out there.”