LMMS Is a Fearsome Music-Making Machine

Music lovers have numerous strong choices for organizing and playing their collections of songs on the Linux desktop. But music creators have far fewer professional-strength options among Linux applications. With Linux MultiMedia Studio, or LMMS, though, one option may be all you really need. 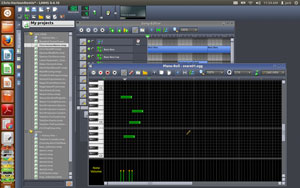 LMMS does it all and does it all well. It is a sound-generation system, a synthesizer, a beat/baseline editor and MIDI control system. Taken together, this app can handily give you all the music-creating ability you need to operate a home music-making studio.

Even better, LMMS goes against several commercial programs and feature-for-feature easily performs as your app of choice. For example, I prefer it to FL Studio. And I find LMMS very similar to Logic Studio, Beat Machine Pro and Apple’s Garage Band.

LMMS pulls together a fully functional DAW (digital audio workstation) with various editors for composing music. It is a potent music-making tool. Its effectiveness depends on the user’s experience with music music and music software.

Unlike other less capable music-maker tools, LMMS is an almost complete package. Plugging in a MIDI-keyboard and folding in an impressive library of sample sounds from horns to drums, I can mix and create music to my heart’s content.

This app makes it relatively easy to build sounds and tones into a full track. It has tools to go beyond just creating musical sounds. It lets me re-arrange sounds and rhythms with a click-and-drag action. I can layer the tracks to create songs.

When finished, I can easily select an output format. I particularly like creating backgrounds and accompaniments so I can play the MIDI keyboard live.

LMMS is readily available in the software packaging systems of both Linux Mint 12 and Ubuntu 12.04. But I had trouble on two computers running Mint. The LMMS package refused to download and install.

The recently released Ubuntu installation was much more agreeable. LMMS installed, only not as expected.

This app does not plant itself in the desktop menu. I tried the installation under the Ubuntu Unity desktop as well as the Ubuntu GNOME 3 alternative desktop. No menu entry anywhere.

LMMS only runs from a Terminal window. But fortunately, the music studio is not boxed in to running just within that window. This is sometimes the case when an app is accessed with a terminal command.

Once the LMMS command is issued from the keyboard into the terminal window, a full-screen GUI or Graphical User Interface takes over. Since the app starts from a terminal command, you must switch back to that terminal window to exit the terminal environment and thus shut down LMMS.

For seasoned Linux users, this terminal access-only approach is not much of an issue. But it is still annoying not to have menu access. This can turn off enthusiasm for the app for Linux newbies.

The user interface is very graphical and very intimidating until you get used to it. Two rows of icons across the top of the LMMS window hide or show various control panels and file commands such as save, create new, open existing project and export project. Another set of display choices line up along the left edge of the main LMSS display.

Each editing panel has its own set of icons displayed across the top of the panel. With several panels displayed, the mind-numbing array of icons can be difficult to handle.

Typically, open panels will include the song editor, beat/baseline editor, project notes, piano roll and drum snare. All totaled, the menus, tools and displayed information pose almost too much to keep track of. Add to this fray the FX mixer panel and you will have an overly stuffed set of displays to take in.

Other readouts and controls on the top of the main display include the tempo, time signature, master volume slide and master pitch slide. There is also a thumbnail display of the visualization of master output.

LMMS comes fully stocked with extensive documentation. This includes links to a wiki page and a collection of user tutorials.

What helped me get a handle on using LMMS was its ready-made tracks. This library includes sample tracks, drum loops and other creative material.

An impressive collection of plug-ins is available from within the program. Click on its icon in the vertical icon row. Up to 14 instrument plug-ins add to the overall functionality.

From my view, I got more comfortable using this app by trial and error than by spending too much time reading through user guides and watching videos. Depending on your musical expertise, you can take a series of approaches.

For instance, I actually enjoyed loading one or more sample files and clicking around the tool panels. By the time I finished, I had altered piano runs and drum patterns to create my own renditions.

The LMMS interface accepts full recordings as well as dragging samples into the Song Editor. I created my own music samples using the Piano Roll panel. Left-clicking on a track name opens the selected instrument.

Double-clicking on each element in a panel accesses additional musical effects and features. Also, it is simple to alter the pitch location and note length.

Not Much Hyperventilating Over Hacker’s Hypervisor Code Theft