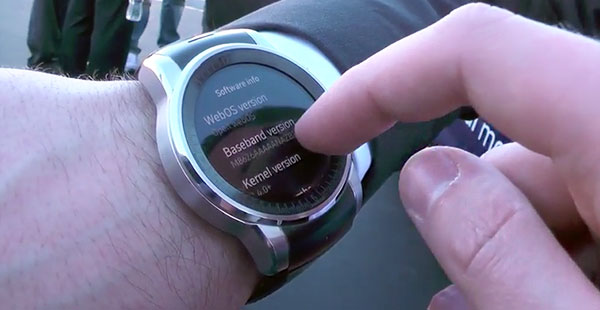 LG Electronics turned up at last week’s CES with a smartwatch that apparently runs webOS.

LG used the watch to unlock an Audi at the show.

“I think that is speculation based on the watch that Audi announced here at CES, which we developed but have not finalized the OS for,” Hong continued.

LG makes no mention of the wearable on its site, but the smartwatch has a dialer, a messages app, music functionality, a calendar, email, and some sort of health-related app, “LG Health W,” according to Android Central.

Pressing the center button brings up a list of apps.

The watch has a circular app navigation menu, a quick settings menu and cellular connectivity, The Verge reported.

The LG webOS smartwatch is “very similar in physical design to the Moto360 but with a solid connection to Audi cars,” said Rob Enderle, principal analyst at the Enderle Group.

“It provides a nice bridge and a way for both firms to experiment in this area and anticipate what will likely be a much tighter connection in the future,” he told TechNewsWorld.

Palm launched webOS in 2009. Though the operating system was generally well received, the company’s handsets running it were unsuccessful in the market.

HP in 2010 purchased Palm for US$1.2 billion in an effort to boost its mobile efforts. However, it lost a bundle when its mobile devices, including the TouchPad tablet, failed to take off.

In 2011, HP contributed the code for existing webOS devices to the open source community.

LG acquired the webOS technology from HP in February of 2013 for use in its smart TV line. By last fall, reports had surfaced that it was working on a smartwatch that would run webOS.

Lashing Out at Android

LG, which reportedly rewrote webOS to work on smart TVs, may have branched out into smartwatches because “device makers are keen to escape the overcrowded landscape of Android and experiment with new software platforms to differentiate [themselves] from rivals,” suggested Neil Mawston, an executive director of research at Strategy Analytics.

Samsung is using its own Tizen OS for its smart devices, Enderle pointed out.

“When it comes to wearables, the focus is so solidly on the unique user experience for a product that will never run many apps that the folks building these things feel differentiation trumps Google’s typical advantages,” he explained.

However, the webOS platform “struggled to take off because it lacked support from developers, hardware makers, operators and consumers,” Mawston told TechNewsWorld. “The user experience for touchscreens was suboptimal, while the number of available apps was limited.”

That might change — the LG-sponsored Open webOS project is making a concerted effort to attract developers.

Android “now has a fight on its hands to win the wearable wars,” Mawston suggested. “It is clear that many of Google’s smartphone partners, like LG, are slightly less keen to support Android in smartwatches.”

The auto industry, too, might be looking for alternatives to Android, as LG’s tie-in with Audi might indicate.

“There is a standing belief among automakers that Google can’t be trusted and that Android, in particular, is insecure,” Enderle said. “I’ve been on several panels with representatives of a number of car companies, and they aren’t Google fans at all.”