The new deal IBM and Lenovo announced last week showcases that the companies are on very different paths toward two widely divergent but equally powerful goals in what is a rapidly changing market.

Lenovo is on a path to dominate the hardware side’s second technology wave, while IBM is jumping to what may be the fourth technology wave. IBM dominated the first wave, which — based on IBM’s impressive mainframe revenues — still has legs. Both firms missed the third wave, which has been dominated by Google.

What is fascinating is that the leaders of the first three waves continue as large profitable companies, though Google arguably is the most powerful and profitable. That suggests the company that leads the fourth wave could reap that same benefit — and that is IBM’s goal.

I’ll share some thoughts on that and close with my product of the week: IronKey by Imation, which finally got Windows To Go, my favorite underappreciated Windows 8 feature, to work for me.

Sperry Rand launched UNIVAC I in 1951 to start the first technology wave, but IBM quickly rolled over it. There really wasn’t another company in IBM’s class until around the mid-1980s. It was massively dominant and did what most dominant companies eventually do: It took its eyes off the customer.

Then along came Apple with its Apple II, and Sun with its client-server concept to start the second wave, but Microsoft and Intel eventually dominated it.

Microsoft and Netscape began the third wave — Netscape’s Mark Andreessen at the time was positioned to become the next Bill Gates, CEO of Microsoft and richest man in the world — but they eventually were overtaken by Google in the cloud and Apple on devices.

Apple and IBM started the fourth wave of computing, which consists of plain language decision engines. Apple’s Siri leads in the plain language part at the moment, and IBM leads in decision technology. The reason this technology qualifies as the next wave is that it will subordinate search technology and traditional analytics with an increasingly intelligent interface that produces far better results, and the value will be in those results.

Lenovo and IBM are on very different paths, which is what makes this deal possible. Lenovo is a hardware company and largely wants to remain one. Hardware isn’t going away, and while it is less profitable than software or potentially cloud services, it is what Lenovo knows. It currently is the top-ranked PC maker, in terms of worldwide volume, but it has little presence in servers.

There are clearly economies of scale that kick in when a firm does both, because it can order higher volumes and get deeper parts discounts that flow to the bottom line. In addition, it can better participate in blended server/PC bids, making the move to servers strategic, given its core competence is hardware.

Ironically, Lenovo is actually following IBM’s example with mainframes, because IBM is the only firm that stayed with that platform after the client-server wave. System Z, its mainframe platform, is now its most successful server platform. As Lenovo’s competitors move to software and services, Lenovo should be able to mirror IBM’s success.

IBM recognizes it has a very short window to create and drive the fourth wave, which could be even more powerful than the previous three combined. This is because for the first time, it includes a massive change in the dynamics of the man/machine interface.

Through wave three, people had to learn how to better use computers, but wave four is about computers learning how to better work with people. Granted, the task was made easier and easier moving from switches, to punch cards (god I hated those), to graphical user interfaces.

Wave four is the first definitive step toward what some have called the “singularity,” which will redefine civilization as we know it. This is a far bigger move than Lenovo’s, but it is also far riskier. This fourth wave isn’t defined yet, and a major breakthrough outside of IBM’s envelope could allow some other company — or Google, which is aggressively working on similar types of systems — to end up owning this wave.

IBM recognizes that, which is why it is divesting. This will give it additional cash to pour into R&D to increase its focus on a favorable outcome. IBM recognizes this is a race and that the clock is ticking, and it is restructuring to ensure that it wins this time.

Having Cake and Eating It Too

It is often said that “you can’t have your cake and eat it too,” but that appears to be what IBM and Lenovo are attempting to do.

Both firms have an extended partnership as part of the deal. That means Lenovo can benefit from IBM’s channels and IBM can continue to sell solutions, while Lenovo can pull from IBM’s product set to more fully populate its offerings.

If the partnership holds, IBM actually will benefit from Lenovo’s increased dominance in wave two, and Lenovo will benefit if IBM is successful in wave four, because both will enhance the solutions offered by the other.

One problem this deal faces is U.S. approval. Currently, the U.S. and China aren’t getting along very well. That’s largely because the U.S. told folks not to trust Chinese technology products even though there was no evidence of government tampering and then got caught tampering with U.S. technology products. That could make regulatory approval difficult.

This one problem aside, the deal is far better for both companies than I would have thought possible. There is no loser here; both firms end up far stronger by doing this than they were, and that is the definition of a good deal.

Product of the Week: IronKey Windows To Go

I immediately loved Windows To Go when it was announced — at least in concept — with Windows 8. Basically, rather than carrying a PC, you’d carry a secure USB key with your Windows personality and core files on it and then use whatever was available when you arrived.

This was particularly compelling for me as I would get in hardware to try out and I really didn’t want to spend a ton of time configuring it just to send it back. The problem was I was never able to really get it to work — and I tried, oh how I tried. To begin with, you need a special USB stick that has special security, and you can’t just go out and buy one of these. The ones available for trial have too little storage. 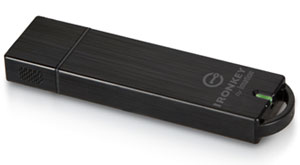 Well, Imation sent me itsIronKey Workspace W300, which meets those security requirements and more. The USB key is housed in a beautiful brushed metal case, and I actually got it to work.

It wasn’t as seamless as I’d hoped. Some of my systems have unique Ethernet controllers, which makes getting the right driver on the key a little troublesome. You often have to go into BIOS to tell the system it can boot from a USB port.

Still, it worked — and now if I ever lose or break my laptop, or if want to do a fast hardware test, I can use the IronKey to quickly get back to work on a borrowed system or to check out a test system without having to configure it first or worry about leaving passwords or confidential information behind.

Windows To Go has been one of the underappreciated/underused features of Windows 8, but it is kind of amazing. Since IronKey got it to work for me, it is my product of the week.

I should end there, but I have one more thought: I still think a line of hardware that would let you use an integrated Windows To Go product much like you do a car key would be incredibly compelling. It would be more secure, it would be more convenient, and a family could better share a smaller pool of hardware, because each person’s Windows personality would be on their key. You could even build the capability into your car. Something to noodle on this week.