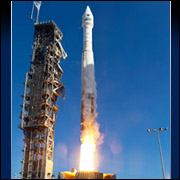 Landsat 8, loaded with several technological advancements for better data-gathering, blasted off Monday from Vandenberg Air Force Base in California using an Atlas V rocket. The latest satellite in the 41-year-old Landsat program has enhanced capabilities to record the changes happening on the planet. 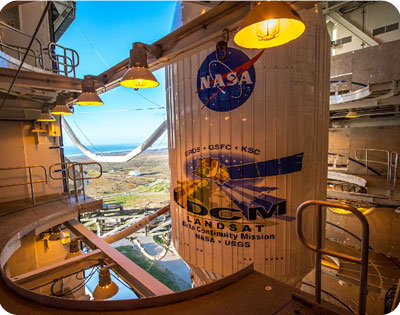 The United Launch Alliance Atlas V rocket with the Landsat Data Continuity Mission spacecraft on board is seen on Sunday, Feb. 10, 2013, at Vandenberg Air Force Base, Calif. (Photo: NASA)

“No other series of satellites or any combination of all other satellites from all countries, including the United States, can match what Landsat has provided humankind — a record of change at a spatial resolution and temporal frequency that scientists and citizens can understand,” Asner continued.

They had “a few detectors with a mirror that directed the field of view across a 185-km swath,” he told TechNewsWorld. The mirror oscillated back and forth seven times a second.

The detectors only viewed each parcel of land in the image for microseconds, “so we didn’t have time to get a lot of signal as the field of view moved back and forth to build up the image,” Irons said.

Landsat 8 uses push-through imaging. Each of the focal planes on its sensors uses “thousands of detectors” across the plane, he explained. Landsat 8 pushes the field of view along its flight path.

This “lets the detectors dwell on a parcel of land for much longer than we were able to with the whisk-broom approach, so we get a much better signal-to-noise ratio,” Irons said. The detectors are read out every 30 meters along the ground track.

Landsat satellites have taken millions of images over the years. These are used in agriculture, cartography, geology, forestry, regional planning, surveillance and education applications. They also help in researching global change.

“Our global landscape is changing at rates unprecedented in human history because of the rising population, climate change and other factors, so observation of the planet from this series of satellites is critical in understanding the gamut of our land cover and land use,” Irons said. “We want to maintain a consistent data record in order to continue to observe these changes to know where we’re going in the future.”

A principal driver of climate change is land-cover change, Asner said. “Cutting down forests, creating fires, logging, agricultural practices, road and city building, changes in sea and land ice, and much more all contribute to greenhouse gas emissions, which absolutely drive important aspects of our climate.”

At the Carnegie Institution for Science’s department of global ecology, Asner runs one of the largest Landsat-based monitoring systems in the world. It focuses on tropical regions and provides high-accuracy assessments of tropical deforestation, forest degradation through logging and fires, and carbon emissions.

Filling in the Gap

In addition to enabling better pictures, Landsat 8 makes up for a gap in the program’s ability to monitor the planet.

Landsat 7 suffered a severe mechanical failure in 2003 on a subsystem called the “Scan Line Corrector,” Asner said. This rendered about two-thirds of each image unusable.

“When you put together the one-third of each image that is good, you get a very chaotic map that few can use,” Asner said, “so we have been working with at least one arm tied behind our backs for many years.” That led most of the global land-mapping and monitoring community to rely on Landsat 5 since 2003.

However, Landsat 5 was decommissioned earlier this year, LDCM’s Irons noted, “so it was past time to get another Landsat satellite in orbit.”