Jellyfish-Bot Swims Through the Air

New York University researchers have designed a flying machine that appears to use the same pulsating motions as a jellyfish.

Leif Ristroph and colleague Stephen Childress wanted to create a small robot that could serve practical purposes such as monitoring traffic. Ristroph presented their creation at the American Physical Society’s Division of Fluid Dynamics meeting on Sunday. 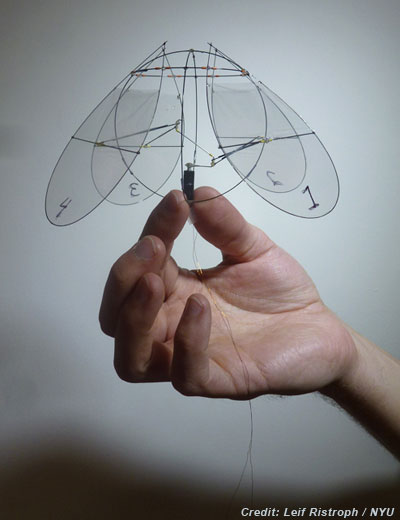 One major challenge in the endeavor was achieving stability. Many devices mimic the motion of insects such as flies. However, flies do a lot of work while motoring through the air, constantly adjusting their movements according to wind or other obstacles. It is difficult to pack that complexity into a tiny robotic device.

“In research in this area, turning to the right kinds of new designs are very important,” said Ashutosh Saxena, Microsoft Faculty Fellow in Cornell University’s Department of Computer Science.

“You want to be open to new ideas in the design world, but you have to think about what is going to happen when these machines have to fly in different kinds of environments, in tiny spaces and in air turbulence,” he told TechNewsWorld.

The device has four wings arranged like flower petals, which pulsate up and down. Though it resembles the motion of the jellyfish in water, it is aerodynamically more similar to the flight of a moth. Its tiny motor is tethered to a power cord. The machine can fly and hover.

The model demonstrates that aerial robotics can move beyond simple wing-flapping designs, the researchers pointed out.

The prototype model weighs about two grams — equivalent to about two paper clips — and is about eight centimeters wide. It’s small size and simplicity could come in handy as researchers further develop the machine.

It could glide into places and where humans or other clunkier gadgets couldn’t, potentially making it useful for surveillance or search-and-rescue operations.

How well researchers can continue to develop the machine to one day take on some of those practical tasks will depend on what the machine is able to carry, said Cornell’s Saxena.

“Aerial robotics research has multiple applications, and many applications need a camera or some processors to really do a job,” he pointed out. “The design is very interesting, but there are more questions about how it can be used.”

Other researchers in the field will be eager to look further into how the jellyfish-like robot could function going forward.

“The main challenge is its size and the weight that it can carry,” Bhandari told TechNewsWorld. “The miniaturization of sensors and motors will play a key role in the success of this kind of device. The sensors and motor have to be small and light enough for this. That being said, research on this kind of device will continue, and the device will one day see practical applications.”