This story was originally published on Oct. 14, 2013, and is brought to you today as part of our Best of ECT News series.

Here in Silicon Valley we are currently worried about a major transportation strike, and I doubt many on either side yet realize that this is likely to accelerate the move to automate most of the related jobs. There is little doubt the problem we are currently seeing here will be virtually gone in a decade, but I doubt the workers will be very happy with the solution.

Often we don’t anticipate the impact of a coming major technology. In fact, even companies that introduce the technology may not benefit from it in the end. For instance, IBM had the first smartphone and drove the PC revolution, but it makes neither today. Phillips showcased iPod- and iPhone-like devices long before Apple thought to enter the market, and it makes neither of these either.

I’ll close with my product of the week: one of the coolest applications of analytics I’ve ever seen. It’s called the “Poodwaddle,” and I think it is a showcase for how you could force the use of analytics both inside and outside a company.

One of the more interesting talks during a recent HP financial analyst event came at the end, when Dion Weisler stood up and spoke about the waves of technology from the perspective of a surfer. I’ve been a crappy surfer myself — emphasis on the word “crappy” — so while he was expounding on how the waves that come after the one you’re riding are worth riding as well, I was thinking about how they’d be more likely to drown me. It occurred to me that with regard to what waves typically do to large dominant companies, my analogy was more accurate.

Few dominant companies can seem to survive big technology waves, and having been around when many of these painful disruptive events occurred, I can point to a few causes. One is that they don’t think the wave is a matter of concern. DEC thought PCs were toys, and DEC wasn’t in the toy business.

Another is that they may be overly protective of their existing businesses. For instance, Sony was so concerned about piracy that it crippled its MP3 efforts, all but ensuring Apple’s dominance. Neither Palm nor RIM (BlackBerry) thought entertainment should be part of phones, and both were badly burned by the iPhone — even though Palm actually had a prototype iPhone-like device long before Apple moved on this opportunity.

Some don’t really get what is happening. For instance, Microsoft killed its timely Courier tablet because it didn’t initially run Office, allowing Apple and Google to gain massive dominance. (iOS and Android didn’t run Office either and did just fine).

HP was actually first with e-books and highly capable smartwatches but both efforts were killed. E-books fizzled in an effort to protect print revenues and smartwatches fell victim to a lack of vision by prior administrations.

This sort of thing happens a lot.

Looking the Other Way

There are four product areas that HP didn’t address, each of which could dramatically change the technology landscape.

The most obvious is personal robotics, which appears to be on a path similar to the PC’s with efforts like the Neato and AR Drone in the consumer space, and efforts like Baxter and Robotic Telepresence in the commercial and education space. Also, Google is pushing the technology into cars, with self-driving cars. Even Intel is in the game with a massive push into 3D Printed Robots driven by Brian David Johnson.

We are about to be up to our armpits in robots, and most of the technology companies, including Apple and HP, seem to be pretending this isn’t happening.

Wearable computing isn’t an obvious success yet and unlike robotics, it won’t be clear whether this market will take off until we have a hit product. Qualcomm’s Toq is more of technology test and Samsung’s Gear is enough of a mess it could delay this segment’s emergence significantly.

HP had developed one of the most interesting products for the military and had the flexible display technology — which it did mention — to make it work. However, if HP doesn’t get this, it could be as embarrassing as the Simon smartphone was for IBM.

The third trend is more on the corporate than the consumer side, and it’s about convergence — old school convergence of telephony and computers. You can see this happening with Microsoft’s acquisition of Skype and Cisco’s move to become the leading telephony vendor, and we are increasingly tying voice into Web customer interaction.

Because AT&T and IBM were so badly burned at trying this a couple decades ago, its class of vendor seems scared to death of doing this again, which is why we are seeing mostly younger companies like Google, Microsoft and Cisco working this.

The final big trend that most seem to be missing is the move to decision engines, or systems that can actually answer real questions in real time using natural language. Apple and Google have rudimentary solutions on their devices (Siri being the most famous) — but at scale, there is IBM’s Watson, which can answer even complex medical questions.

This is a major step toward artificial intelligence with the potential to obsolete existing analytics and Big Data solutions, which would require high levels of integration back into the data repositories to approach real-time speed. With Watson, and standing alone, IBM could do to Big Data what it did with the mainframe. It is kind of surprising that everyone else seems to think this is impossible.

The One You Didn’t See Coming

HP’s talk of waves clearly reminded me that the wave you worry about is the one you don’t see, and in technology the history of companies putting on blinders is both deep and painful — with every major company on the list. Even Google didn’t really get social networking.

There are at least four trends, and I say at least because I’m sure I have blinders on that keep me from seeing certain things as well. Like the wave that nearly drowned me (yep, true story), it is the one you don’t see that’s likely to take you — even if you’re a large tech company — out.

Product of the Week: The Poodwaddle World Clock

Analysts spend a lot of time thinking about how to display information so that it is actionable. The entire movement toward Big Data and analytics is an effort to make executives smarter — yet we know executives often will prefer their gut over solid intelligence. Getting them to look at the data and then prioritize their limited resources in order to get the biggest bang for their buck is core to efforts to turnaround or grow companies to success. Yet executives don’t read or act on most of what is given to them in a timely fashion.

The Poodwaddle World Clock in a single view displays an amazing amount of information. It automatically rotates displays for data types, and in a very short period of time you get a sense of the state of the planet. 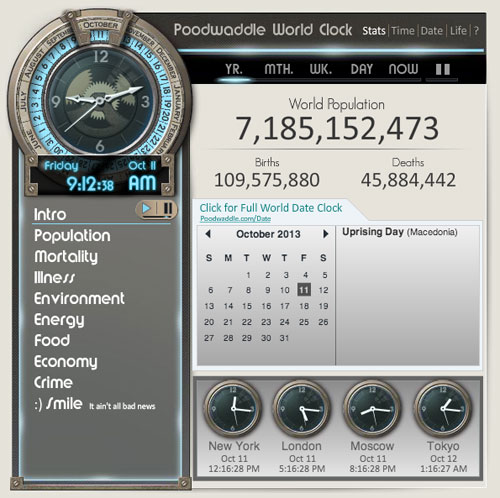 You can see births against deaths; what is killing people ranked by impact; how abortions map to births; ecological status in detail; energy sources by production levels; food production by type; the U.S.’ economic performance; national crime statistics; and a bunch of other stuff. This clock should be what the U.S. president starts and ends his day with — in about a minute, you have an accurate (assuming the numbers are correct) view of the health of the U.S. and the world.

I’m a big believer in well-informed management. In fact, I think Microsoft’s problems weren’t as much Ballmer as the bad information he was fed. If more managers had the kind of information about their companies that the Poodwaddle World Clock provides about the U.S. and the world, we would have far more successful companies. Because Poodwaddle showcases how to display analytics right, it is my product of the week. Oh, and it’s free!