Is Icahn Attempting a Hostile Takeover of HP? Figuring Out the Backstory

When it comes to any merger, you often can’t trust the reason the firms are merging, particularly if financial rather than operational managers are driving the process. When it comes to hostile takeovers, you can bet you are being misled, because the rhetoric will address synergy and the power of the two firms together, but the folks driving the effort know the more likely goal is to destroy the acquired company.

Carl Icahn, who is one of the most feared corporate raiders in the world — possibly the most feared — is behind this one. He is known to be the death of firms he touches, while he almost always benefits personally to a high degree.

I’ll share some observations on Xerox’s attempt at a hostile merger with HP Inc., which I expect to fail, and then close with my product of the week: an interesting gaming laptop from HP.

Hostile Mergers: A Game of Misdirection

One exception to the usual pattern was Oracle’s hostile acquisition of Peoplesoft. In that case, Oracle was up front about the fact that it wanted to shut down and absorb Peoplesoft, which was the result. Given the goal was to shut down Peoplesoft, Oracle got rid of a painful competitor and was able to acquire most of the customers, because migrating off Peoplesoft wasn’t easy and Oracle executed sharply. This isn’t to say the Peoplesoft customers were happy. They mostly weren’t, but Oracle did do what it said it would do.

Generally, hostile mergers are about either destroying a competitor (as was the case with Peoplesoft) or acquiring key technology that the entity backing the merger wants to access. For instance, when Broadcom attempted a hostile acquisition of Qualcomm, it was believed to be backed by Apple, which appeared to want to eliminate iPhone competitors and gain control of Qualcomm’s intellectual property, potentially returning it to market leadership.

The U.S. government blocked the move as a matter of national security, likely out of concern that it would have handed 5G leadership to Huawei and China. That alone could have shifted the balance of power from the U.S. to China.

Strangely, Broadcom went on to acquire CA, which suggests that it had another reason for a fast merger — the most likely being that it didn’t want its financials to settle. One way to hide poor financial performance is to create lots of noise, and mergers create lots of noise.

The irony here is CA was a company that also was built by rapid acquisitions and treating customers badly. Even the rumor CA was going to acquire a firm would lead to that firm’s customers running for the hills. At least that merger didn’t appear to be hostile.

What brought up the latest speculation is the “A” list directors Xerox brought forward last week, which made it look like it wanted to replace HP’s diverse and industry-focused board with one heavy in CEOs and seeming superstars.

With an acquisition, particularly a hostile acquisition, the board that remains when the acquisition is over generally is the board the acquiring company started with — or, in this case, a board heavy with Carl Icahn employees and arguably controlled by him, even though his name doesn’t show up either on the Xerox board or the proposed board.

Now, if industry experts ran Xerox, as opposed to financial types, you might assume that the goal might be to eliminate a competitor. However, HP is far broader than Xerox, suggesting that even at the current price, Xerox would be overpaying massively for the benefit it likely would get. Financial types don’t overpay for anything — it isn’t in their nature. So, this effort seems to be focused on getting access to a valuable asset, or assets, that most investors don’t realize HP has.

Given the level of effort, the asset — or assets — must be significant, and I think I know what one or both may be.

HP has two hidden jewels that are significantly undervalued: its 3D printing technology and its print head technology.

The first is beginning to play in manufacturing, particularly automotive, and has the potential to massively change manufacturing on a global scale. They not only has created technologies to handle plastics, and plastics in color, but also moved recently to metals and has volume and cost advantages.

It has the potential to redefine manufacturing and is on a path that eventually could turn a factory into what effectively is a large printer. This is big, but it still pales in the face of the second technology.

HP’s print head technology has been adapted to several industries and falls under the general category of microfluidics. Now, applied, this could do things like revolutionize the way car dealerships fix chips in expensive cars (it can cost tens of thousands of dollars to repair a paint chip in Bugatti, for instance), or it could transform healthcare.

This last has massive potential if you understand that blended medications — or, more accurately, the steep prices associated with them — are a big contributor to excessive medical costs. Further, it’s currently not easy to match medications with each patient’s unique body.

With the proper sensors, HP’s microfluidics technology could do both. It could blend low-cost medications in place, potentially at a fraction of the cost of preblending them, and it could administer exactly the right amount of medicine for a patient’s unique requirements. That could remove much of the cost of the medications — think chemotherapy for instance — and virtually eliminate overdoses and massively reduce addiction.

When a company controlled by a corporate raider like Carl Ichan takes an interest in something, it means there is a part of that something he knows is massively undervalued, because the cost of his effort will be extreme, and he is not known for losing money.

Figuring out what he really is after is critical to understanding his strategy, particularly if you are already an investor, because he likely is trying to take a gain that you otherwise might get and make it his own.

He knows how to monetize and sell the most valuable technologies, and he isn’t exactly known for leaving much behind, which is why his skill set is known as “corporate raider.” Those of us who recall what he did to TWA are hoping he doesn’t do the same thing to HP.

I’d almost bet the hidden buyer he has in the wings is connected to China, as it has both the money and the interest in making sure these revolutionary technologies migrate — along with jobs and revenue — out of the U.S.

Since I’m focusing on HP this week, I thought I’d pick one of the more interesting notebooks I saw at CES. It has a second smaller display above the keyboard, and the touchpad is relocated to the far right so it more easily can be used as you would use a mouse while gaming. It is rigged with a dongle that allows it to play Xbox games from the Microsoft cloud. 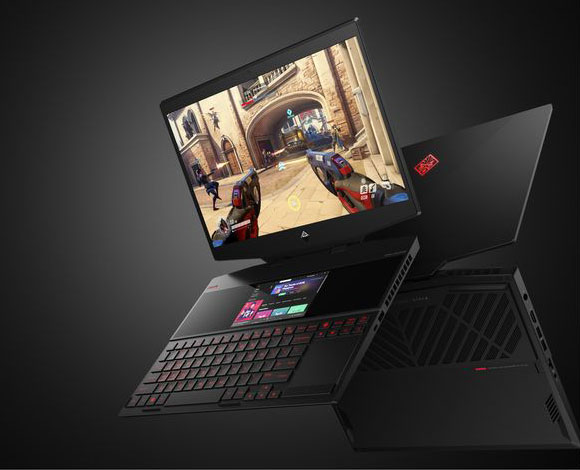 While not a cheap date at US$1,999, it provides the combination of full-on desktop performance with a usage model that most serious gamers who need a portable solution would appreciate. I didn’t get a chance to do much more than get a feel for the ergonomics — which are good — but it has an impressive industrial design.

While not lightweight by any measure, it is still light enough to carry in a backpack and for those who want a truly powerful gaming system to take with them, this might be the ideal choice. Be aware, though, that it is a tad too large to play easily in an airplane seat.

It has the new 2070 Nvidia RTX ray tracing card and an Intel 9th generation processor with six cores, as well as a 1-TB SSD drive, so it likely will outperform your gaming desktop machine. It looks awesome. The second screen is handy if you are playing a game and also watching your email, messaging, or looking for an alert — or if your boss, teacher or spouse is sneaking up on you.

Its performance means it also is good for photo or video editing, and it would be amazing for those who want the latest automatic Photoshop features showcased in Intel and Adobe’s CES demonstrations to work properly.

While I chose this laptop partially because of my interest in HP’s hidden gems this week, another part of HP that stands out is its PC unit, which is one of the most innovative and balanced units in the segment.

Its newOmen X2S RTX Studio 15 Laptop is one of the most interesting products in the company’s line, so it is my product of the week.