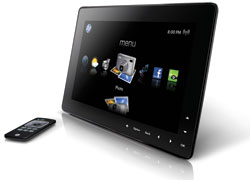 The DreamScreens have remote controls and touch controls. A built-in clock can show time in digital or analog format with dual time zones. Users can choose their alarm tones or music.

DreamScreen users can either stream photos and music wirelessly to the devices or drag and drop these to their network-connected devices from their PCs. Users can stream music from the Internet through Pandora. They also have access to HP SmartRadio, a service that aggregates live Internet broadcasts.

The DreamScreens have built-in speakers as well as headphone and external speaker jacks.

Users can also access and view images from Facebook and Snapfish. In addition, users can access five-day weather forecasts for various cities worldwide and can view their calendars.

You Can’t Always Get What You Want

Although HP says its DreamScreens provide easy Web access, that functionality is limited to only a few sites — the device does not come with a full-bodied Web browser.

“Users can only get the apps that come preloaded — HP SmartRadio, Pandora, Facebook, Snapfish, the weather service and local playback capabilities for music, videos, photos, and the built-in clock and calendar,” HP’s Karim said. “Weather reports are provided by WeatherBug.com.”

HP is looking into adding more partners to provide services for the DreamScreens.

HP is positioning the DreamScreens as complements to users’ PCs. Will users be willing to fork out money for an additional device that is not exactly a must-have?

Chances aren’t good, according to Gartner analyst Leslie Fiering. “The DreamScreen appears to be an interesting product in search of a use,” she told TechNewsWorld. “It doesn’t provide a new set of capabilities or usage patterns that would differentiate it from existing products that have a higher convenience factor and the converged devices you can use for other things.”

However, the technology is sound, Rob Enderle, principal analyst at the Enderle Group, told TechNewsWorld. It might depend on one’s point of view — is it some sort of hobbled tablet netbook, or is it a pumped-up digital photo frame? In Enderle’s view, it’s the latter. “They are the most capable, enhanced digital picture frames currently on the market that I know of, not something else which has been de-featured,” he said.

For its part, HP describes its DreamScreen devices variously as picture frames and wireless connected screens. HP has reportedly said that it looks more elegant than a PC and can be hung on walls or put on tables in living rooms or kitchens, unlike computers. So, just what is the market positioning for the DreamScreens? A pretty toy? A put-anywhere thingie? A wall decoration?

“This is a whole new device and form factor that fits nicely in any home environment with a large screen size for an optimal experience for all of your media consumption and staying connected with your friends through social networks,” HP’s Karim said.

All this fails to impress Enderle. “HP has clearly done better work,” he said. “Normally, I point to them as an example of excellence, but this is confusing and if it isn’t fixed, this product, which is actually kind of cool, will follow their Media Center, TVs, cameras, media extenders and cellphones into obscurity.”