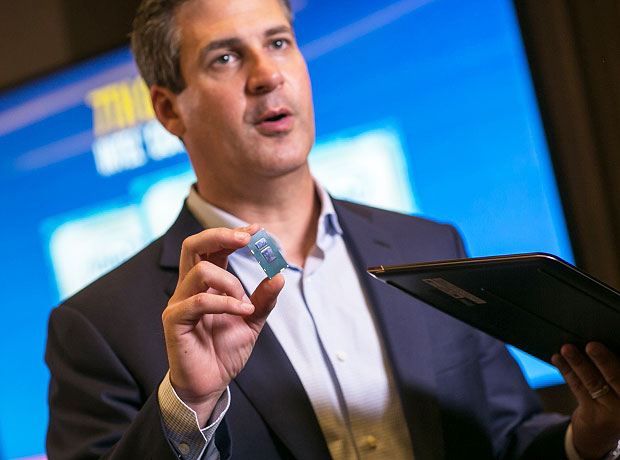 Facing a shrinking market for personal computers and a stalled market for tablets, Intel on Tuesday unveiled its 7th-generation processors, code-named “Kaby Lake,” which deliver more speed and power than its 6th-generation chipsets, while improving battery efficiency.

The new processors will allow customers to create their own premium 4K UHD video and 360-degree content, said Navin Shenoy, general manager of Intel’s Client Computing Group, and they’ll be able to share it at a rate 15 times faster than is possible with typical 5-year-old personal computers.

Graphics capabilities will be three-times more powerful than on those older PCs, Shenoy said, and the new Thunderbolt 3 technology will enable a single connection for an external graphics dock and 4K UHD monitors.

More than 100 different 2-in-1 mobile computing devices and laptops using the new chipsets are expected in September, he said. Desktops and enterprise PCs with the new processors are coming in early 2017.

In connection with the availability of Kaby Lake chipsets on computing devices, SPHE will offer new features like 10-minute previews and 48-hour rentals.

The company often compares Kaby Lake’s performance capabilities with those of 5-year-old PCs to rationalize the upgrade to the latest CPU, he told TechNewsWorld.

“Intel may get a bump from Apple and other PC vendors that choose to skip Skylake if they choose to use [Kaby Lake]” said Jim McGregor, principal analyst at Tirias Research.

However, the introduction of the 7th Gen Intel Core processors “does not change the competitive landscape,” he told TechNewsWorld, “especially in segments outside the PC where Intel still faces challenges from other incumbent solutions.”

The Surface Book and Surface Pro 4 were among the first devices to launch with the Skylake processors, he noted.

“At launch, those devices were plagued with firmware issues resulting from the Skylake processors,” Ubrani told TechNewsWorld. “I would imagine the vendors would exercise a bit more caution this time around.”

Microsoft is collaborating with Intel on Windows Holographic, according to Michael Fortin, corporate vice president, Windows and Devices Group Core Quality, who touted the 7th generation Intel processors, the newest OEM devices and Windows 10 as producing the best user experiences.

In terms of the impact on gaming, it’s questionable how big a driver the new Intel processors will be.

“We love to see advances in processor technology but do not think this is a big leap for gamers,” said Ted Pollak, senior gaming analyst at Jon Peddie Research.

Intel has claimed that the flagship Kaby Lake i7-7700K processor will speed up 4K video and video editing, compared to the Skylake i7-6700K. However, the 7700K actually has a slower nominal clock speed at @3.6ghz versus 4.00ghz, but the same boost frequency at 4.2ghz as the 6700K, Pollak pointed out.

Games that respond to higher clock speeds tend to be heavy in artificial intelligence and physics, he noted, so simulation titles like ARMA 3 and Elite Dangerous, and open world titles with heavy physics, like Battlefield, may not see a big processing advantage. For mainstream titles and other AAA games, including e-sports, CPUs are becoming less important than GPUs for game quality.