In ‘The Internet’s Own Boy,’ the Good Guy Doesn’t Win 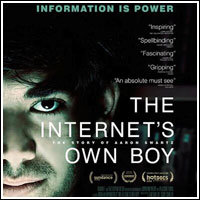 The Internet’s Own Boy: The Story of Aaron Swartz, a documentary directed and produced by Brian Knappenberger, is opening at theaters and online this weekend — and re-opening wounds about the subject and his suicide.

It is also serving as a reminder that often the good guy doesn’t win, Rob Enderle, principal of the Enderle Group, told TechNewsWorld.

“I hope that is the biggest takeaway people watching this movie have,” he said. “If you are going to fight this fight, be aware it will get really ugly.”

Who Was Aaron Swartz?

Aaron Swartz, a Harvard University fellow, computer program and Internet hacktivist, was responsible, among other things, for creating an open source system called “DeadDrop,” which was posthumously developed by The New Yorker to allow informants to deliver documents anonymously. The Freedom of the Press Foundation has since taken over development of the software.

Swartz worked on a number of high-profile Internet projects, including RSS, Creative Commons and Reddit. He became a partner in Reddit after it merged with his company, Infogami. Swartz founded the group Demand Progress, which helped to derail the Stop Online Piracy Act that was making its way through Congress a few years ago.

The beginning of Swartz’s undoing came early in 2011, when he was arrested for systematically downloading hundreds of academic journal articles from an MIT database. Federal prosecutors later charged him with two counts of wire fraud and numerous violations of the Computer Fraud and Abuse Act.

Swartz faced US$1 million in fines and 35 years in prison. He hanged himself following the prosecution’s second refusal of a plea bargain. He was 26 years old.

The prosecution of Swartz’s case has received heavy criticism for being overzealous.

The Internet’s Own Boy takes viewers through Swartz’s accomplishments, followed by his standoff with federal prosecutors. The documentary became available on the Internet on demand on Friday, simultaneous with its release in major cities in the U.S. and Canada. Reviews so far have been positive.

Early reviews suggest that moviegoers are interested in more than just revisiting the Internet’s “old days,” circa 2009. The movie “may inspire people to ask hard questions about how the new world is being shaped away from view, behind closed doors,” comments a fan reviewer on Rotten Tomatoes.

“A moving documentary that will leave you heartsick as well as more than a little angry,” says another.

“The documentary’s release as the net neutrality debate rages will only underscore what we have lost,” notes a third.

The movie does have the potential to rile viewers, depending on how popular it becomes, David Johnson, CEO of Strategic Vision, told TechNewsWorld.

It is not unheard of for laws to be passed or changed in memory of a person, although usually this person is a victim of a horrific crime. Not everyone would necessarily see Swartz as a victim, Johnson said.

Politics likely will influence viewers’ sympathy toward Swartz, although this is not a simple Republican-Democratic divide issue, he remarked.

This movie perhaps will be viewed differently, coming as it does in the aftermath of Edward Snowden’s numerous revelations about the erosion of privacy in the U.S. and around the world, than if it had come out earlier.

“I think people who might not have been sympathetic to Swartz in 2013 might be willing to look more favorably at what he was doing now,” Johnson said.

“Swartz clearly didn’t want to do any harm. He wanted to help with what he saw as a major problem,” Enderle said. “A lot of young hackers feel that way, and in that respect this movie is a good thing. Oftentimes, young adults don’t have a sense of the risk they are taking and will do things without quite thinking them through.”

Sometimes, he reflected, you can accomplish the same goals without a huge risk.