I’ve often wondered what you would get if you combined Apple and IBM. The two companies have little overlap today in either customers or products, and both have what the other lacks to grow their respective markets significantly. While the cultural issues would likely make such a merger not only inadvisable but impossible to actually do, both firms could learn a lot from the other.

So, I’m not suggesting the two companies will merge, though stranger things could happen, but I thought it would be fun to showcase how each could benefit from the other. I spent most of the week with the IBM STG (systems and technology group) doing a deep dive and was struck by some of the similarities and differences.

I’ll share my thoughts on that idea and close with my product of the week: a new offering from Sonos, the only media hardware maker that builds truly Apple-like products.

As I watched IBM present its products and thought about what Sam Palmisano has done with the company, I saw a lot of similarities. Like Steve Jobs has done with Apple, Sam has restructured IBM to reduce its complexity to better match his skill set. The result has been a company that may not always have the greatest market share but often has the strongest profitability. In a world of generic me-too offerings, both companies differentiate using their own unique secret sauce.

IBM uses its massive intellectual property base in system cooling, analytics and energy management technologies to overlay Intel-based servers and create products that tend to lead their respective segments. Apple uses its history of design, OS X and its application portfolio to differentiate its offerings successfully in what is often thought of as an increasingly generic PC market.

Both firms are uniquely trying to fight the trend to focus almost exclusively on price competition and instead are trying to drive up value so that they can justify higher margins and increase customer satisfaction.

Both companies are defined by historic customer and employee loyalty in their respective segments and are relatively unique in their ability to get buyers to publically praise their offerings. While the Apple fan base is well known, what isn’t well known is how hard it is for most vendors to get IT buyers to get up on stage and praise them on the record. At IBM, there were panels of customers — like Visa and HyGen Pharmaceuticals — consistently praising the company.

Unlike users, IT managers don’t like to praise a vendor publicly because they are often not sure whether they will remain with that vendor and are concerned they will look bad in front of their management. There is clearly a lot of risk in doing this, yet year after year, IBM has reference account after reference account praising its offerings.

Analysts aren’t supposed to take the word of the vendor but are more inclined to take the word of buyers who put their money where their mouths are. IBM has also been getting the majority of the Sun customers taht are running from the failing Sun/Oracle merger (Snorkel). This appears to be, for many of them, like going home, because they were IBM accounts before they went to Sun.

Apple is known for integrating marketing deeply into the company and making choices based not on what engineers want to do but based instead on what customers could be motivated most easily to buy. This marketing focus is not shared by IBM — although it should be — because many of its market-leading advantages either aren’t that interesting to customers or are simply not known to them.

This integrated approach to marketing and product development is unique in most segments but serves as an example of excellence and goes to the core of why Steve Jobs was CEO of the year.

IBM is known for quality, and in its market has to drive to achieve appliance-like quality. Apple has good quality, but it is generally differentiated by perception. That goes to its marketing strength above Acer, which is a value-oriented vendor that provides equivalent quality. I think Apple should bring its quality up to IBM’s levels to better match its image with the expectations of its buyers.

While I can appreciate both companies’ need to keep future products secret, IBM appears to be vastly more transparent when it comes to making people aware of problems and aggressively correcting them. Granted, this is a requirement of the segment that IBM occupies, but I remain concerned that consumer electronics companies’ common method of stonewalling about problems puts customers at risk. That’s particularly true when the problems are things like exploding batteries and virus exposures. It is laudable that both companies want to be perfect; it is even more so when one makes a mistake and quickly admits and corrects it.

There are few companies more nimble than Apple, and this results from a structure that forces people to make decisions and a CEO who aggressively makes sure his orders are followed. IBM is often defined by process of consensus. It appears to be designed largely to avoid blame, but it slows the company down significantly and makes corporate-driven initiatives like Smart Planet nearly impossible to implement, regardless of how compelling they are.

IBM’s structure is immortal with substantial redundancy built in. Apple’s is too dependent on the survival of Steve Jobs, which Apple dances around but has never really addressed. There are books written on how to do what Steve jobs does and Steve is still around to train a successor in his unique skill set. No company should be at risk of failure due to the loss of one person, and Apple should follow IBM’s example and become immortal.

Imagine a company that had Apple’s client products, IBM’s back end, was immortal, and had the capability to competitively market its products better than anyone else. I doubt that such a company could be matched — but internal operational issues make such a merger unlikely. Conceptually, though, it’s what both Apple and IBM could grow to become if they learned critical skills from each other.

Product of the Week: The Sonos S5

Only one consumer electronics/tech company I know of comes close to matching the product excellence that Apple constantly showcases. That is Sonos, which provides the only easy-to-install and relatively affordable whole house music system in the market. 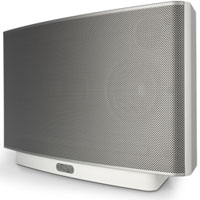 Sonos was the first to really get the need to bypass the PC and go directly to cloud services for content, and its products were easy enough to use that my wife could actually make them work (very important to me). Its line was marred by the lack of an entry product, until now. The Sonos S5 is such an offering.

It is a plug-and-play unit that can be controlled from a PC, from an iPhone or iPod touch (both with free applications), or from its own new touchscreen controller.

I wish Sonos would make this product in black, but because it is easy to use, because it is a great Web-based music player, and because I haven’t found anything better, the Sonos S5 is my product of the week.