IBM and Apple: Why We Love Monopolies and Then Kill Them

The age of the computer started in the 1950s, and one of the first things that happened to a then relatively tiny IBM was it got nailed by the Department of Justice. The result was competition and the modern age of computing. That was the age of the mainframe, and that age is long gone, or so you would think. However, last week, the DoJ opened another, very similar, investigation of IBM. It was — you’d never guess — on the mainframe. This technology still accounts for an impressive amount of IBM’s revenue, and it has really been the only player in the space for some time. What makes this interesting is that there is another vertically integrated company that regularly engages in the same kind of behavior, and that is Apple.

Given that the commercial that defined Apple was the “1984” ad, which was a shot at IBM — and now this puts into sharp focus how similar the two companies are in terms of customer satisfaction, control, financial success and risks of government oversight — this seems like a great topic for this week.

I’ll close with an appropriate product of the week: a book that I wish every executive I’ve ever watched give a presentation (except Steve Jobs) would read. It’s called The Presentation Secrets of Steve Jobs. It teaches excellence and a skill set many of us desperately need to learn to emulate.

If you open up the latest issue of Consumer Reports and look at the PC rankings, one company is consistently at the top, and it’s also the one with the most expensive products: Apple. It enjoys both the highest margins and the highest consistent product quality. It is also the most incredibly closed and proprietary PC company currently operating on the planet.

When another company, Psystar, tried to get around Apple’s license and use Apple’s own operating system to build what many Apple customers actually build for themselves — a “hackintosh” — Apple moved aggressively to protect its margins and put Psystar out of business. I actually thought it had succeeded, but imagine my surprise when I found unique Psystar systems for sale on the Web at PC-like prices. One line was actually sold out, so the company must be doing rather well. Note that the systems it sells are unlike anything Apple has and fill a known value hole in Apple’s lines.

IBM, with mainframes, enjoys some of the best margins in the computing world. In fact, mainframe margins probably make Apple jealous. These systems were the foundation of the computing age, but conventional knowledge (even inside IBM — I worked there at the time) was that they would go obsolete by the 80s. It was a given that the mainframe was dead, and only fools would stay with it for long.

Over two decades later — and after virtually every other manufacturer that tried to make a mainframe either exited the market or failed — IBM remains virtually the only player in this segment. This is not just something you don’t see often — I don’t think it has ever happened before: A company establishes a market, gets slapped by the U.S. government to open it to competition, but still ends up owning what appears to be a nearly identical market decades later. In terms of dollars, it may actually be bigger now.

It kind of showcases that just allowing competition doesn’t assure that sustained competition is something the market will support. While the technology in mainframes has changed dramatically over the ages, they remain the more reliable and most expensive systems — with the possible exception of some legacy supercomputers — in the market today. They also have some of the most loyal customers. Granted, that’s partially because most of those customers can’t move, despite the best efforts of companies like HP, Dell, and even other IBM divisions to move them.

For the most part, IBM and Apple customers are content, but that perception can be changed.

The Problem and Promise of Competition

Recall that right before Steve Jobs came back, Apple had been opened up to clones, and its current CMO actually was the marketing head for one of them (and also was, coincidently, my first customer). You could buy an Apple PC for the same price as a Windows PC, and they were selling briskly. The only problem was that Apple machines weren’t. When given a choice between buying a computer that was inexpensive and one that came with Apple’s historic quality and price, it appeared that the vast majority of buyers, both old and new, chose price over quality. Apple was within a year of going under.

Steve Jobs came back, shot all of the clone companies and returned the firm to its monopoly roots. Apple recovered, and the average quality of the product improved. Plus, though this is anecdotal, customer satisfaction and loyalty seemed to improve as well. Granted, it took a number of years, but the end result was happier: customers who were actually more loyal. You could argue that loyalty was at least partially forced, but wearing a leash isn’t that bad if you like the way it looks and you like where your master is taking you. Ask my dogs.

Competition improves two things: price and choice. It can also force innovation, but that innovation often is more annoying than anticipated, because we, as a race, just aren’t that happy with change — particularly as we grow older.

What often happens during an antitrust action — and we saw this with Microsoft — is that perceptions surrounding a dominant company change, and it is those changed perceptions that actually diminish the firm’s power more than the regulatory changes — unless, like AT&T, the company is broken up. Companies aren’t broken up often, though, and breakups don’t always take — look at the “new” AT&T.

I actually think that customers would prefer a monopoly over competition if monopolies didn’t misuse their power and eventually piss off the very customers they need to survive. Antitrust actions are an indicator of inappropriate action by a dominant company — a firm moving illegally to stop some other firm from filling a hole it either can’t or doesn’t want to fill. The proper response would be to create a solution or partner with the company doing it.

What generally happens is the dominant firm moves to protect margins by putting the competing firm out of business while ignoring the customers’ needs. Company murder by monopoly — like regular murder — can have some rather dire results. Ask Microsoft. (The irony with Microsoft is that Netscape actually committed corporate suicide, but that is another story.)

The sustaining lesson is that firms that have monopoly power have to be subtle. They have to make sure they maintain trust, as well as customer satisfaction, and they have to take as lessons emerging competitors and respond to the customer need such companies represent with products, solutions, and price adjustments of their own — not with weapons of mass destruction pointed at the competitors.

Happy customers = high margins. If you forget the first part, then the second part will collapse along with the monopoly.

Product of the Week: The Presentation Secrets of Steve Jobs

I go to a lot of events; it is a part of the job that I generally dread. Events I don’t dread going to, historically, have been Apple events, because they tend to be memorable and exciting — as long as Steve Jobs is presenting.

When he isn’t there, they tend to drift back into showcases for the kind of poorly prepared crap that most executives pass off as keynote speeches and glorified PowerPoint-rich borefests.

I swear, some folks should “just say no” to getting up on stage — ever. 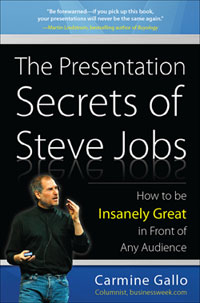 Steve Jobs’ brilliant presentations are the result of a lot of planning and effort — and many of his skills can be learned.
(click image to enlarge)

The reason Steve Jobs makes the best presentations in the business? He prepares, he rehearses, he personally assures the staging of products, and, frankly, he personally takes an interest in all aspects of the products he presents. He is a craftsman, and it comes through in his work.

I strongly believe not only that is this a learned skill, but also that the people who learn it will be vastly more successful in their own presentation and career efforts.

I was an early reviewer of The Presentation Secrets of Steve Jobs, by journalist and communications coach Carmine Gallo. It is an excellent way to learn how Steve Jobs creates his magic.

Learning the tricks of a magician often spoils the magic, but this book only gets you to appreciate the massive work that goes into making a keynote or product pitch successful.

Because it makes us better by showcasing a skill we all, and I include myself, could improve, The Presentation Secrets of Steve Jobs is my product of the week.

Rob Enderle is a TechNewsWorld columnist and the principal analyst for the Enderle Group, a consultancy that focuses on personal technology products and trends. Disclosure: Rob Enderle read a draft version of The Presentation Secrets of Steve Jobs for the purpose of independent review. Author Carmine Gallo later sent him a complimentary copy of the published book.
Get Permission to License or Reproduce this Article