IBM Aims to Equip Electric Cars for the Long Haul 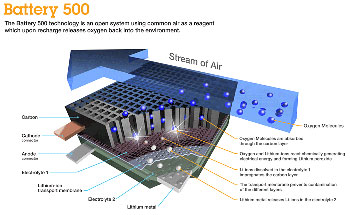 IBM Research has been striving to develop a lithium-air battery that would make it possible for a family-sized electric car to drive 500 miles on a single charge.

President Obama had previously made development of electric vehicles a priority of his administration, and to date has provided a US$7,500 tax credit for buyers of plug-in cars, and has further provided billions of dollars in grants and loans to companies for vehicle and battery development through Energy Department programs.

However, drivers aren’t plugging in yet. The mass adoption of electric vehicles has fallen short of optimistic projections, and even highly touted vehicles such as the Chevy Volt have missed sales targets, according to a report from Lux Research. Two impediments have been the cost of the vehicles and the range of their batteries.

“The limited range of electric cars is slowing down their adoption,” Michael Holman, research director at Lux Research, told TechNewsWorld. “This new technology has the potential to address those issues for car buyers. If it’s possible to increase the range, that might make the decision to buy an electric car easier for consumers.”

From Ion to Air

Most currently available electric vehicles have a range of about 100 miles before it is necessary to recharge the lithium-ion battery. The key to improving the range is not in redesigning the car itself, but in boosting the power source — namely the battery. IBM is thus focused on new lithium-air batteries.

“New materials development is vitally important to ensuring the viability of lithium-air battery technology,” said Tatsuya Mori, director and executive managing officer of Central Glass. “As a longstanding partner of IBM and leader in developing high-performance electrolytes for batteries, we’re excited to share each other’s chemical and scientific expertise in a field as exciting as electric vehicles.”

The key difference with lithium-air batteries is that these have higher energy density than lithium-ion batteries, while the primary “fuel” is the oxygen, which is readily available in the atmosphere. As a result, lithium-air technology promises a battery that offers a longer range and one that could be smaller than existing batteries — but other issues remain.

“This technology is still similar in ways to conventional lithium-ion batteries,” said Holman, “so the number of cycle lives could still be an issue. With each charge, tendrils form — and these get larger each time until the battery can no longer be recharged.”

This issue of cycles cannot be understated.

“Cars are one of the worst for cycle life, because you are recharging it so often,” said Holman. “Given the cost of the battery, you likely won’t want to replace it after just two or three years.”

For this reason, lithium-air battery technology could have uses in smaller devices before truly making its way to electric cars, he added.

The IBM partnership will likely put the development of long-range batteries into high gear.

“This is absolutely fabulous technology. Right now, progress is stuck in developing the chemistry to improve the quality of the batteries,” Simon Cobb, CEO of the North Carolina Center for Automotive Research, told TechNewsWorld. “What we are seeing with battery technology is brilliant. Before the Apollo program, there were no cordless power tools, and now we’re seeing cordless devices of all sorts. And this development will only mean greater applications for batteries, as well as electric cars’ greater range.”

The key metrics remain the number of charges that the battery can handle, as well as weight and cost, added Cobb.

“There are other issues, such as the time to recharge,” said Cobb. “That could be very important, because it battery with greater range will need time to recharge. While there are ways to charge a battery quicker, what does this do to the battery life?”

Consumer interest in electric vehicles is still stuck in the slow lane despite rising fuel costs at the pump. Much of this is due to the premium price put on electric vehicles, and while the lithium-air technology could improve the range, the cost concerns of the cars will likely remain.

The cost for lithium-ion batteries will likely fall by as much as a third by 2017 as production improves, supply increases, and batteries are sold in higher volumes, according to a Pike Research report released in March. What remains to be seen is whether consumers will want to pay a premium for cars with that much greater range.

“Five hundred miles is a very good range,” said Cobb. “Actually, the acceptability threshold is far less than that for most consumers, but range is something that is very easy to understand — and more importantly, sell.”

In fact, it is possible today for lithium-ion batteries to provide that range, but at costs that go beyond just the financial.

“It is technically possible with the existing battery technology of today to have an electric car that could travel 500 miles,” said Holma. “However, there would be no room for passengers or luggage.”