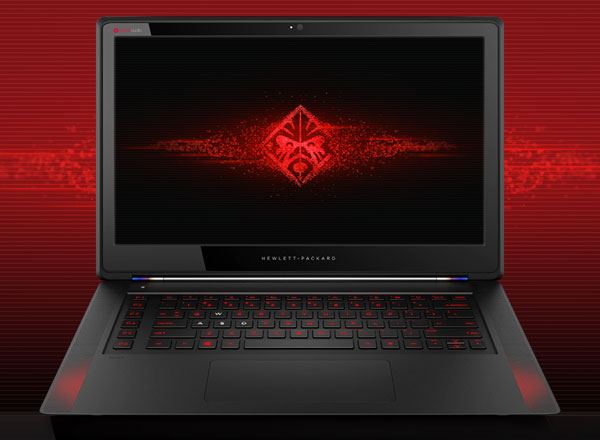 The new machine, which is available for order in the United States with prices starting at US$1,500, combines performance, portability and style, the company said.

The Omen features an industrial design that was engineered to manage heat. It has dual fans that pull cool air through the bottom of the system, and rubber feet that elevate it to help channel in cool air. These design features are necessary, as the Omen packs some serious hardware inside its CNC-milled aluminum case.

It is powered by an Intel Core i7 Quad Core processor and features an Nvidia GeForce GTX 860M graphics card, which enables the machine to deliver full HD graphics on the 15.6-inch, 1080p touch-enabled display. HDMI and mini DisplayPort outputs allow the computer to be used with an HDTV or external monitor.

The gaming rig also features a 128-GB solid-state drive (SSD), which enables games to load two to three times faster than traditional hard drives. There is an option to upgrade to 256 GB or 512 GB PCIe SSD drives that offer load times up to nine times faster than traditional hard drives. The Omen is available with 8 GB to 16 GB DDR3 of memory, along with graphics memory of 2 GB or 4 GB GDDR5.

The Omen isn’t HP’s first play in the gaming market. However, the brand has scored major success with gamers.

“Tom Bradley, the guy running HP PCs at the time, systematically destroyed it,” he told TechNewsWorld. “This product is pretty much all that is left.”

It wasn’t exactly an easy market for any manufacturer to score instant success, however.

“At the top are enthusiasts or extreme gamers that will buy or build a system with the latest and greatest high-end technology available and spend thousands of dollars to do so. This is a small piece of the market,” he said.

“Coming down from that are the gamers that are looking for a high-end experience, but not necessarily willing to fork out [as much] cash as the extremist, and they’ll look at purpose-built machines for the gaming market,” Stice told TechNewsWorld.

“At the base of the pyramid, and the high volume, are the everyday gamers that will just use their everyday PCs to play everyday games,” he noted. “This system from HP I would categorize in that middle section — a purpose-built machine for the gaming market, but also a subsegment of that, which is the mobile gaming market.”

When niche companies such as Voodoo and Alienware were acquired by large mainstream computer makers such as HP and Dell, it became important to assure hardcore gamers who traditionally paid a premium for those niche brand computers that the quality was still there under new management.

Gaming has been the one segment in which PCs have held their price as the market has diminished in scale.

“The gaming PC market is still strong, but a very small piece of the overall PC market,” noted Stice. “What it does provide PC OEMs, though, is a place to showcase their high-end machines, while competing in a subsegment of the consumer PC market that has remained stable through the last couple years when the general consumer PC market as a whole has been struggling.

“The challenge with mobile high-end machines is the space to pack in all the high-end components — and keeping it ‘mobile’ — while keeping the thermals of the machine down,” Stice added.

HP generally has not been known as a gaming brand, but the Omen could be a way for the company to change that mindset.

“Just based on the specs, it does seem HP is in that market,” said Stice.

“Some gamers may complain there is no 4K display option, or [that it needs] a better graphics card, while others may say the gaming experience is what really matters, and the HP Omen may in fact meet that,” he suggested.

“HP has gone a route of designing a gaming system towards the ultrathin type of design while putting in reasonably high-end components,” Stice added.

“It’s a balance between hitting a gaming performance that people will expect, a form factor that is attractive and works, and all at a price point that won’t turn gamers away,” he observed.

“Gaming is on the rebound,” noted Enderle, “but you really need to be tight with the gaming community to drive a product like this. Alienware is — HP not so much.

“This laptop runs against the Alienware 13, currently a class leader in portability and desktop performance, and the Razor Blade 14, which came out earlier — and both have far stronger Quad HD screens,” he pointed out.

“The name on the box and the performance in it is important to gamers, and this Omen is a pale reflection of the kind of amazing machines Voodoo Computers used to turn out,” Enderle said. “I’d call this a bad Omen for HP’s future in gaming.”