Netbook computers remind me of travel toothbrushes and portable air mattresses. You use them only when you need to move a lot, like when you’re on the road or camping or running around at a trade show. They’re just not nearly as functional or comfortable as the at-home version.

But when you’re on the move and you need a real keyboard, a real Web browser and a full PC operating system, a netbook will save you no small amount of agony.

I put a new HP Mini 1000 to the test while covering the Consumer Electronics Show this month. It’s an event that had me and tens of thousands of others constantly running from one end of Las Vegas’ massive convention center to the other, or hitching rides to other host locations miles away.

I have a 17-inch laptop that I suppose is technically “portable,” but I generally consider it my “nice” computer, and it weighs something like 10 lbs. Taking that to CES would be kind of like carrying around a small, well-behaved baby. And the thought of composing full-length articles on an iPhone hurt my brain (if only Apple would make a wireless keyboard for it …).

So for four days, the HP Mini 1000 became my constant companion.

While it’s possible to cram a much more robust machine into a tiny form factor, the Mini and other netbooks like it focus on delivering a small amount of power in a small footprint for a small price. The 1 GB version I have retails for $425 on HP’s Web site, though it can sometimes be found for less on other sites and at retailers like Best Buy.

For a lot of users, the physical smallness of a netbook will be more of an obstacle than the computer’s processing power. With that in mind, I chose the Mini over other netbooks on the market mainly because of its keyboard. I didn’t want to hunt-and-peck using my index fingers. Some other netbooks — Dell’s Mini 9, for example — have a slight bezel around the keyboard, which looks like a waste of space where the computer needs it the most. The HP’s key layout, however, makes use of just about every millimeter of the 10.3 inches of width the Mini has going for it. The company says that results in a keyboard that’s 92 percent as large as that of a standard laptop. 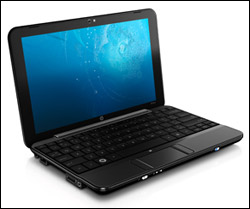 That missing 8 percent is noticeable at first. Each time I set fingers to keys and started typing, there were several missed strokes. But once I’d been at it for more than 10 seconds at a stretch, my hands would learn the space they were working in and adjust. Beyond that, typing was comfortable.

The Mini is available with two widescreen options: 8.9 inches and 10.1. The colors are clear, and the LED-backed brightness is powerful enough to use in daylight conditions. The Mini has no VGA or HDMI port, though there is a proprietary dock connector. Also, the screen unfortunately does not extend past about 120 degrees. That’s fine if I was sitting at a table, but if the Mini was on my lap or I was trying to make do with a clear spot on the floor — really quite common at CES — then I couldn’t get a comfortable viewing angle.

The speaker below the screen had no trouble working up a decent volume level, albeit with a fair amount of distortion. The built-in webcam seemed to require a surprising amount of light in order to display a good image. Even in a fairly well-lit room, the view was murky.

The touchpad below the keyboard is responsive, though its tiny size let my finger wander into the scroll zone a lot. It’s also easy to accidentally touch the pad with your palm while you’re typing; fortunately you can shut off the touchpad with one button.

Design-wise, the worst crime the Mini commits is placing the touchpad buttons to the sides of the pad rather than below it, something that a lot of netbook makers besides HP do. It’s supposed to reduce size, but it raises frustration levels. My right thumb kept poking for buttons that weren’t there, only to ask my left index finger for assistance. I don’t usually have that tap-the-pad-for-a-left-click feature turned on, but I trained myself to use it on this computer, while my middle finger took the role of right-clicker. It all felt very awkward.

Like just about every netbook computer that went on sale in 2008, the Mini relies on Intel’s Atom processor. That’s good for power — the Atom is designed for efficiency, meaning it won’t kill your battery after an hour of general use.

If fact, the battery on my Mini never left me high and dry at CES, though I did take along its tiny power brick and plugged in whenever I got a chance. For a more controlled test, I started with a full battery and set it to play video on maximum screen brightness. It lasted about 2 hours and 20 minutes.

The processor pulls Windows XP along nicely; booting up to the point at which I could launch the video player took a little over a minute. Most netbooks don’t have the horsepower to run Vista, thus the older operating system. Some come with the option to have a Linux distro as your out-of-the-box OS. The Mini 1000 doesn’t offer that option, but another model, the Mini Mi, has similar tech specs plus a Linux OS that HP calls “Mobile Internet.” HP’s warning: The Linux command line interface is disabled on that edition.

As the name of the category implies, netbook computers are built to surf the Net, usually a fairly light task for a PC. Other applications like video playback, OpenOffice and iTunes got along fine on the Mini, though stuff like advanced 3-D games and Photoshop just aren’t going to happen.

The most basic Mini comes with 8 GB of solid-state disc space, but I recommend paying $25 more for the 16 GB SSD or 60 GB HDD. After adding programs like Firefox, OpenOffice, VLC Media Player and iTunes, I’d already racked up over 6 GB of baggage in total, which would leave little room for music, videos or other documents if I’d gone with the basic configuration. A portable external HDD may be a wise investment.

At CES, I needed a notebook that would get me online, let me type for long stretches in reasonable comfort, get photos from my camera into an e-mail, and keep running between stops at power outlets, all without sending me to a chiropractor after schlepping it around for several days.

The HP Mini was up to the job, and at no point can I say I really missed having a full-sized notebook. However, what I did miss was something I couldn’t solve simply by carrying a bigger laptop: ubiquitous connectivity. There were wireless connections available here and there in the convention center, but I didn’t like having to resort to my phone to check the Web when I had a PC right next to me.

A netbook is built for Web surfing, yet everywhere you go you need to either hunt down some WiFi or pay a monthly fee for an aircard or a smartphone tether. For some, that last solution might be worth it.