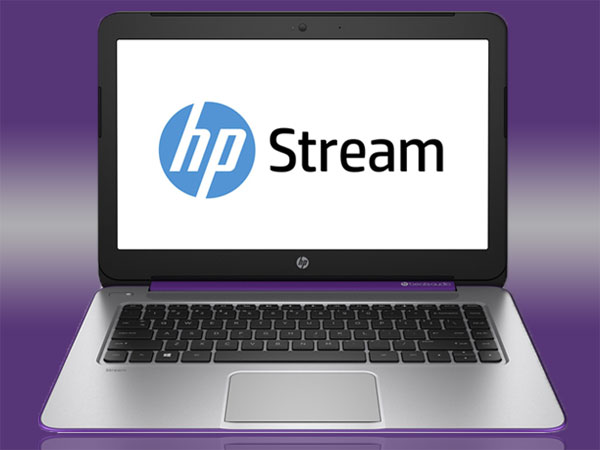 HP on Monday unveiled the Windows-based Stream laptop some have referred to as a “Chromebook killer,” but instead of sporting the US$199 price that was expected, it will cost $299.

It comes with 100 GB of space on Microsoft’s OneDrive cloud storage service for two years, included at no additional cost for a limited time.

The Stream is slated to ship on Sept. 24.

News of the 14-inch Stream first mentioned at Microsoft’s Worldwide Partner Conference in July. Microsoft COO Kevin Turner reportedly said it would be a $199 laptop that would run Windows and would be available in time for the holidays.

Also announced at that conference were similar $249 devices from Acer and Toshiba featuring 15.6-inch and 11.6-inch displays, respectively.

Why the price of HP’s Stream jumped by $100 in the intervening time has been a matter of considerable speculation, but HP declined to comment on the pricing.

“HP is working on a family of HP Stream products that run Windows,” company spokesperson Cherie Britt told TechNewsWorld. “The HP Stream is the first product in our newest portfolio of cloud-based devices. Stay tuned — there is more to come.”

“This is all about expectations,” he explained. “You don’t say you’re going to be $199 and then come out at $299. There is a psychological issue.”

Part of the problem is that there are already Chromebooks priced at $199 and $249, he pointed out.

“A Windows machine can do more than a Chromebook can,” O’Donnell noted, such as run Windows apps.

Chromebooks have been “winning in some cases, but as far as I can tell that’s been based purely on price,” he said. “The pricing thing is a critical point. To compete with these Chromebooks, you need to compete on price.”

With a price that’s a full 50 percent higher than was expected, “that becomes the big question mark,” he added. “Can people justify it?”

Windows is “starting to feel some pressure” from other form factors and other operating systems, including Chrome OS, Jeff Orr, senior practice director at ABI Research, told TechNewsWorld.

“We’re seeing some strategy changes within Microsoft, and one is reduced royalty costs for entry-level notebook PCs,” he explained.

It’s possible that Microsoft expected HP would be able to achieve the $199 price point, but that “on further review, HP was not able to do so,” Orr suggested.

“It’s hard to do a clamshell device below $300 in terms of basic component costs — there are limits as to how low you can go,” O’Donnell said. “Apparently, there are some challenges they must have run into.”

Whether the price really needs to be below $200, however, is a matter of opinion.

“It really still is about finding the right fit for the market,” Orr said.

A device like this could be aimed at households in mature markets that already have a home computer, for instance, as well as at homes looking for a first PC in markets with lower penetration, he pointed out.

“I think this type of solution, with its functionality and ability to use a wealth of Windows apps, presents opportunities on a market-by-market basis to serve different purposes,” Orr observed.

The Stream’s price is competitive with Chromebooks with 13- and 14-inch displays, said Jim McGregor, founder and principal analyst with Tirias Research.

HP currently offers a Chromebook for $299, he pointed out.

The Stream “would seemed well-equipped to compete with comparable Chromebooks — even HP’s,” he noted. “It would seem that HP is trying to make both platforms comparable and leave the decision up to the consumer.”