HP vs. Oracle: A Perspective on an Ugly Divorce

Last week, HP started down the unfortunate path of taking Oracle to court over the statements it has made about Itanium, the technology HP shares with Intel. This is reminding me a lot of an ugly divorce — and given that the 140,000 customers Oracle and HP share are kind of like their kids, I think some strong parallels can be drawn.

I know a lot of folks are struggling with what is going on between HP and Oracle, and I think I have an analogy that works.

Imagine, if you will, what appears to be the perfect couple. They like similar things, and they each have skills that complement the other’s. He is a great writer — she is a great editor; he likes training dogs — she likes caring for them; on the tennis court, he plays great well back — she is excellent at the net. In other words, they are more than a couple. They are a team.

Now imagine the wife has a recurring problem. Because she was badmouthed by a coworker, people believe bad things about her. She didn’t do them, but the couple has had to deal with the problem of her undeserved reputation for years. The husband knows just how damaging and unfair to her it has been.

Now imagine that as they get older, the husband gets the hots for a 19-year-old girl. First, he starts to cheat with her, and then he decides they should get married. He knows he can’t just toss his wife under a bus — what would their joint friends and customers think? — but he is clearly hanging out with that 19-year-old a lot, and the wife is getting suspicious.

During this time, the wife catches the gardener peeking in her window while she is dressing and fires the guy. The husband, meanwhile, is off spending time “mentoring” the 19-year-old.

When he finds out what she has done, the husband flies into a rage, publicly chastises his wife for being stupid, and makes broad connections between the fired gardener and Michaelangelo. Then he divorces his wife and hires the gardener — who knows his wife’s reputation is undeserved. As a final blow, he proclaims he can’t trust his wife because of her bad reputation, collapsing their joint business. He tells the kids they must turn on their mother or they will lose their college funds.

I’m sure we have all seen divorces go like this, and if we know both parties well, we can tell who really is at fault.

HP and Oracle were well matched. HP did hardware and Oracle did software, and the two virtually never competed. HP Itanium hardware, with Oracle’s help, was heavily tuned to optimize Oracle’s software products, and both companies collaborated nicely in their sales efforts, positioning themselves very well against IBM’s similar solutions.

However, Oracle’s CEO wanted more. He had a bit of a mid-life crisis and bought Sun Microsystems — a major HP competitor. That made HP nervous, but it trusted in their “marriage” and believed that Oracle would do the right thing.

Throughout their history together, HP has struggled with the rumor that Itanium was going to be discontinued. This rumor was largely spread by competitors. While unfounded, it was also connected to the fact that initially Itanium was to be Intel’s next generation of processors after Pentium, but because it was late and expensive, Intel went another direction.

However, there was no plan to kill Itanium, and both Oracle and Mark Hurd, who has worked for two Itanium customers — HP and NCR — and now works in the office of Oracle’s CEO, knew that intimately.

After catching Mark Hurd behaving badly and evidently lying about it, HP fired him without asking Oracle’s permission. Oracle’s CEO, Larry Ellison, had a hissy fit in The New York Times and then turned around and hired Mark Hurd to work with him.

This month, Oracle announced that Itanium was in fact dead and put in place financial penalties for any joint HP/Oracle customer who remained on it.

Oracle is the husband, HP is the wife, Mark Hurd the gardener, and the 140,000 shared customers are the kids. HP is effectively suing Oracle for slander and demanding that Oracle stop threatening the kids. (I’m not really convinced the gardener part works, so any suggestions will be gratefully accepted.)

There are a number of other issues that surround this conflict. One is that Mark Hurd was under restrictions with regard to what information he was allowed to use, and he clearly knew that HP was particularly vulnerable to the Itanium attack.

Oracle is under confidentiality agreements with Intel, which would prevent it from disclosing a future Intel move regardless of whether it was true or not.

Finally, the 140,000 customers are pretty pissed that this is going on and particularly upset that Oracle is trying to force them into making very expensive hardware platform changes they can’t afford and to move from a vendor they trust — HP — to a Sun architecture they have been eliminating. This may work in favor of IBM, which has been rolling out Oracle migration packages and funding programs aggressively over the last two months.

Sometimes people are like companies and behave similarly. I think this entire problem comes from the fact that Larry Ellison personally made a mistake in buying Sun and is now doing anything he can think of to cover up that mistake.

Still, much as it would be if you or I implemented a similar plan, it is only making things far worse — and making Oracle appear dishonest in a market segment that demands trust.

Just as it would be if I were making bad decisions as a result of some kind of mid-life crisis, it appears Oracle is mirroring its founder. The end result likely won’t be pretty.

I spend a lot of time talking about how to compete with Apple, largely because few companies do it well. I can categorically say what doesn’t work is to try to become a better Apple or to provide me-too iClones.

The Panasonic Toughbook Tablet isn’t an iPad clone. It is a tablet that emphasizes the Toughbook’s strengths, and it shows well against the iPad’s weaknesses.

It will come out with a mature version of Android, unlike earlier tablets that shipped with an unstable version. [*Correction – June 21, 2011] 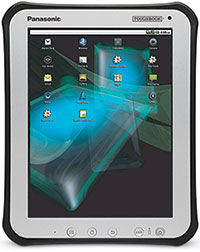 It is hardened, so you can take it to sports events, the beach, on bike rides, and to places that would likely ruin an iPad.

Rather than a low Nit (read really dim screen) and glossy display surface, which is nearly impossible to read outside, the Toughbook tablet has a high nit (bright) screen and a nonreflective coating so it can be used better outdoors.

Instead of being inherently unsecure — if the iPad is stolen someone could get to your private stuff — the Toughbook tablet has built-in hardware security and security software for better protection. [*Correction – June 21, 2011]

Oh, and because people do occasionally have to sign things and often like to draw, it is designed to use a stylus for higher touch accuracy, although you can use your finger as well.

In short, it does well what the iPad does poorly, and it may be the best Android tablet yet. Because the Toughbook tablet is a better solution for me than the iPad is, it is my product of the week. It is due in the 4th quarter.

*ECT News Network editor’s note – June 21, 2011: Our original published version of this column stated that the Toughbook tablet would come out with a mature version of Honeycomb. It’s not yet known which version of Android it will run.

*ECT News Network editor’s note – June 21, 2011: Our original published version of this column stated that the Toughbook tablet would have built-in biometric security. Details on the type of hardware security it will have are not yet known.