HP Is Back: Should It Rename Itself Compaq?

HP just took over the PC market lead worldwide. You probably don’t get how incredible this is, so here’s an analogy: It’s as if a crooked referee put a bunch of lead on a racer who already was overweight and shuffled him to the back of the pack, but in the end, the guy finished first. You’d seriously want to look under his T-Shirt to see if you’d find Superman’s costume.

This isn’t Apple coming up with an iPod or iPhone and flanking the market — this is a firm that simply pushed on the gas pedal at a time when everyone said it was going in the wrong direction (PCs were dead, remember?) — and kicked everyone’s ass.

As impressive as that is, there’s more. This is also basically a brand new firm with a new focus, but people still see it with all the baggage the “HP” name brings, including the bad reflection from the massive mismanagement over at its sister company, HPE — which, in contrast to HP, had all the advantages but couldn’t seem to find the gas pedal.

This is a perfect example of why a firm should consider changing its name — and Compaq, a powerful brand it owns, could be the perfect answer.

I’ll expound on that and close with my product of the week: the Smartflower, which must be the coolest solar solution for your home in the world now.

I’m simply amazed by HP’s performance. It was clear when Meg Whitman spun out HP that she didn’t believe it had a chance in hell of succeeding. Firmly convinced that both PCs and printers were dead, she saddled the firm with virtually all the combined company’s debt — pretty much stacking the deck to ensure that HP died while HPE succeeded.

Many of Dion Weisler’s peers privately thought that he wanted to be CEO so badly he simply didn’t see that he couldn’t succeed and foolishly took the job. Maybe it’s good no one told him that because now, when you look at the two companies, HP is a stunning success — HPE not so much.

In fact, HPE is a bit of an industry joke now. I mean, how do you stack the deck like that and still find it impossible to execute? What is scary is that if Meg Whitman had won the California election, Southern California likely would be part of Mexico today.

You can just imagine, at the split, the HPE employees looking down on their HP compatriots, thinking just how screwed those poor suckers were going to be — and now realizing they’re the ones screwed. At the next joint company reunion, HP employees should wear T-Shirts with two letters: The first should be “H” but the second should be “A,” as in “HA!” It does show that strong leadership, focus, and simplicity can do amazing things in any firm.

There is a rule of thumb in marketing that says that one of the telltale signs that a CMO (chief marketing officer) has no clue what to do is a decision to change the firm’s name or logo. As with all rules, however, there is one big exception — and that exception is when the brand is working against you.

Now the brand “HP” doesn’t have negative equity. The fact they sales are as good as they are showcases this. The problem is the image of the company and how it is trading.

The big indication of this is that both HPE and HP made a recently published list of the most-hated CEOs, placing at No. 8 and No. 10 respectively. It is clear from the criteria that it was attitudes toward the legacy HP and HPE that drove the decisions.

Dion Weisler is almost unknown outside of HP — but in HP, as you might expect, he is a bit of hero, and HP’s performance has been well beyond expectations. The employees there seem to love him, the channel seems to love him, and the investors should love him because they love anyone who can execute — and man can he execute! These are the groups that picked the supposedly most-hated CEOs.

My takeaway is that it is the drag from HPE and the history of HP before the breakup that is causing Dion to be so badly reviewed. In short, it isn’t his performance that is hurting him — it is Meg Whitman’s performance that is driving the perceptions surrounding both HP brands. If HPE continues to underperform and be defined by market mistakes, executive instability and layoffs, HP and Dion won’t be able to own their own image.

Even though the HP brand doesn’t have negative equity (by the way, that is when a consumer would pay more for a non-branded product than one with the negative brand), HPE is creating an ongoing drag on the image of HP, which must be hurting sales and company valuation.

Granted, given how tightly printers and PCs are tied to the HP brand, such a move wouldn’t come easily or cheaply — but unless HPE can be convinced to rebrand (in contrast, it seems very close to dropping into negative equity in the enterprise space), HP’s only fix is to bite the bullet and take full control over its destiny.

Now, you wouldn’t just cut the brand — you’d transition it, and the likely first step would be to strengthen the sub-brands, similar to what IBM did with ThinkPad before selling the line and firm to Lenovo. But which brand?

While HP always has been bigger in printers, Compaq was by far the bigger player in the PC space. It too had its operational and leadership problems, but even though it has been well over a decade since it operated under its own brand, I expect that folks mostly remember it fondly (or don’t remember it at all).

In any case, it is a storied brand, HP owns it, and were HP to migrate to Compaq it would free it from all the negative equity it is getting from HPE’s problems, and allow it to take a clean step away from the HP history that it is ever more slightly connected to.

Think about this another way. Right now, HP sells PCs and printers and looks far more like Apple prior to the iPhone than like the old HP, which historically was far more of a big iron back-office company.

Admittedly, printers would be a big problem given the firm’s dominance, and perhaps maintaining HP as a sub-brand for the printers alone might be the safest path going forward — much like Lenovo maintains the sub-brand ThinkPad and likely always will, even though the “Think” part of the brand still has heavy IBM connections.

There are a lot of amazing and somewhat ironic things this decade. We have a government run by the Republicans, who currently are doing more to advance a variety of social agendas they don’t agree with (albeit unintentionally) than the Democrats who support those agendas are able to do.

Massive firms are working on artificial intelligence to make everyone but their CEOs smarter, which is where AI would have the greatest impact.

Global warming advocates are overstating the horrendous outcomes so aggressively that they are discrediting the entire effort.

Also, a little company with a big brand showed the world that even with the deck stacked against you, you still can prevail, through leadership, focus, strategy and execution.

So, I think HP should rebrand, step away from the past, and fully embrace the future it can define rather than be defined by the past or by a sister firm where execution, even with the deck stacked in its favor, is an almost impossibly elusive thing. What do you think — should HP bring back Compaq?

Solar power is incredibly attractive to me because it seems so much like magic. You put some glass panels on your roof or in your yard, and magically you have electrical power. I took our last house to solar power in the early part of last decade, and it cut my power bill substantially — even though the panel yields were a fraction of what current panels put out.

Putting panels on tracking frames so they follow the sun isn’t just more expensive — the result looks like crap. The typical solution looks little better than if your kid built a poorly-thought-through science project in your yard, which you couldn’t take down without causing hurt feelings.

What I needed was a yard implementation of a tracking solution that didn’t look like crap. You’d think that would be easy, but apparently it isn’t.

However, what I found was the Smartflower. 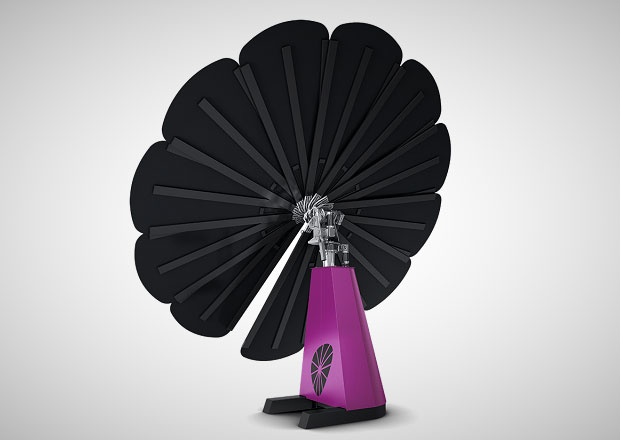 This thing is brilliant. In the morning, it opens like a flower. Then it tracks the sun till the end of the day, closing down again at night or during harsh weather (to protect the panels). It looks cool, it comes in purple (a requirement for my wife), it has decent yields for its size (largely due to the tracking part), and it is relatively simple to set up. (You can simply drill it into the ground and trench to your power meter). It comes mostly pre-assembled in a box. You likely will need a crane, though, as it isn’t light.

It also has that critical wow factor, as folks simply have not seen one of these before. Be aware, though, that getting one is a bit of an issue right now. Since it came to the states from Europe, it has been selling out, and until the company builds a U.S. factory (in planning), supply is a tad light and thus there aren’t a lot of installers yet (I’m having trouble buying one myself).

Still — man is this thing ever cool, and it likely is the only product like this that my wife has seen and just immediately said “buy it.” High-tech lawn art that pays the bills? That’s a natural for my product of the week!