HP and the Uncertain Science of Corporate Rebirth

The technology market is a graveyard of companies that had potential and lost their way either to fail or be gobbled up and lose their identity. Netscape, Novell, DEC/Digital, Palm, Transmeta, ATI, ROLM, Northern Telecom, and FLIP are all names of companies that have left us as independents or completely over time. Most of these firms were high fliers once, but all of them hit hard times, resulting in the disappearance of their brand and identity.

However, there are some success stories: IBM and Apple lead the field of firms that were reborn to become stronger than they initially were, and both arguably lead their respective industries in valuation and financial performance.

The idea that you can come back is driving Meg Whitman’s effort to rebuild HP, and I got an update on her efforts last week. The company is making solid progress, showcasing that Whitman’s experiences at eBay and Bain Capital equipped her with many of the necessary skills to drive a positive result.

Some key lessons from the Apple and IBM efforts are being applied, but some are perhaps being forgotten. I’d like to make sure they are captured this week in this exploration of the science and art of corporate rebirth.

I’ll close with my product of the week: the HP ElitePad, which showcases what may be the most aggressive Windows 8 tablet to hit the market and one that nicely blends future innovation with past success. It’s kind of a metaphor for what Whitman needs to accomplish at HP.

One of the things former Apple CEO Steve Jobs lamented before his return to Apple — and drove after he took over again — was the company’s handling of design. Before coming back, he was very critical of how badly Apple was building products, many of which were increasingly copies of what others were building and effectively cheap crap. When he came back, he cut most of them and the related departments and made design a primary driving goal for the company. It paid off massive dividends.

Meg Whitman came out strongly pointing to this same element as important and then her team developed a series of products that were some of the most beautiful I’ve ever seen. The new Spectre, Envy and ElitePad products show a consistency and design effort that are rare in a typical PC company and very consistent with Jobs’ own efforts. They remain a milestone on a path, but I think Jobs himself, as well as both of the HP founders, would have been proud of the direction.

Steve Jobs also knew the importance of image and the need to control what was said about his company. He aggressively closed off all leaks from inside the firm (something that Tim Cook appears to have relaxed to his own detriment) and put in place marketing programs that dwarfed the industry in terms of funding and execution. He had Apple looking more successful long before it was, and heknew the importance of having image lead reality.

Folks who believed Apple was a success were more likely to invest in it and buy its products, thus creating a self-fulfilling sequence. (It is also no secret that former IBM CEO Louis Gerstner put much of his initial effort into corporate marketing funding and staffing early on.)

While HP is showing progress in this direction, the firm is still leaking from inside and it has not executed a program to rebuild the company’s image, which often seems more controlled by Oracle — and others — than HP. Oracle has done a substantial amount of damage using Apple-like skills, which is not a surprisegiven Oracle’s CEO and Jobs were the closest of friends.

Jobs actually got control of Apple’s image before he fixed the products, and it was the combination of both that ensured his result. There was no real marketing presence at the HP analyst meeting, and that likely contributed to the stock price decline that occurred during it.

Jobs learned that perception trumps reality, and while HP is making organizationalchanges that suggest a fix, that fix isn’t yet evident and Whitman didn’t speak to marketing this time.

The most important person in a turnaround initially isn’t the CEO — it is the CFO, who’s responsible for making sure the company can both survive the process and execute financially to the plan. In effect, the CFO has a bigger stick than the CEO does, because the CFO can control the budget. Jerry York was a godsend to IBM and he drove much of the initial rapid progress and positive results. When he left to attempt a Chrysler turnaround, IBM’s efforts nearly stalled and took far longer to complete.

Cathie Lesjak, HP’s CFO, is undertaking a similar Herculean effort, and the metrics that are being used to demonstrate HP’s improvement are largely under her control. She has proven to be both one of the most consistently right HP executives over time and one of the most capable — and Whitman and HP’s board are giving Cathie most of the tools she needs to get the jobs done.

Gerstner identified early the people he could trust and those he couldn’t. He made sure he had a team that was hand-selected to turn IBM around, and he had Jerry York solidify the team. Rebels were managed out of the company, often very rapidly, because while internal disagreement was healthy, internal attempts to cripple the turnaround effort or make Gerstner look bad were not.

This was something that Carly Fiorina did not do when she ran HP, which contributed greatly to her failure, because she was betrayed from inside the company several times. In her case, you could generally see which executives were behind her and which weren’t just by observing their behavior at HP events.

At the HP analyst event, once all of the executives were on stage it seemed obvious which ones were all in and which ones thought Whitman needed to find a new job. From casual body language to a tendency to talk over Whitman, there was at least one executive who appeared to be looking for an opportunity to rebel. With Carly Fiorina, a number of us regretted not pointing out earlier one of the executives who would later betray her, and I hope Whitman doesn’t repeat that mistake.

Wrapping Up: If Only Presidential Candidates Behaved as Well

There three things that stand out in my mind about the HP event that bode well for the company. Whitman demonstrated an impressive knowledge of the company and its problems, she articulated a detailed plan to address the problems identified, and she reported impressive early progress in executing this plan. There is little doubt now in my mind that she is the right person for this job.

But — and this is consistent with her campaign for California governor — she still needs to understand the critical importance of owning the firm’s image, and she has to unify her team. Weakness in either of these areas could destroy what she has accomplished and derail her future plans.

In the end I was left with the idea that if the presidential candidates, either of them, could present problems, solutions, or progress as eloquently I’d be a much happier American. While not perfect, this is an impressive first-year start to what could be another amazing turnaround.

Product of the Week: the HP ElitePad

In a few weeks, we’ll be up to our armpits in tablets running Windows 8, and because Microsoft set a very tight specification, many of them will look like identical twins. I’m a big fan of unique products, and the HP ElitePad falls into this category. It goes back to HP’s past to pull forward an idea that I still think is brilliant.

The HP ElitePad uses a series of smart sleeves called “expansion jackets,” which change the utility of the tablet so that it is optimized for a particular use. Need massive battery life? Put on abattery sleeve. Need a keyboard? There’s a keyboard sleeve. 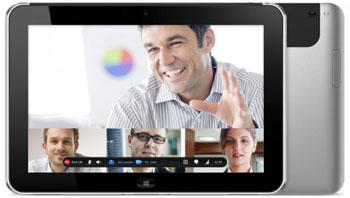 I expect folks who need a better camera, or a scanner, or a space alien detector (for my Men in Black friends, yes I KNOW you are out there) will one day be able to easily slip on the appropriate sleeve (once they are all created) and suddenly transform the device into something that is uniquely capable.

I was always fascinated by the idea of a modular computer; in fact, IBM came up with the idea and Compaq/HP executed it with the old iPaq PDA. Of course, were it me, I likely would have called the ElitePad the iPaq 3 just to piss off Apple (the “iPaq” name precedes iPod and iPad).

I can imaginea military sleeve, a car diagnostics sleeve, a medical sleeve in the product’s future. In short, this is themost un-iPad product coming to market and the most unlike any other tablet, and it is arguably both themost innovative and the most uniquely HP. As a result the HP ElitePad is my product of the week.