How the Windows Phone Could Rise Up and Dominate 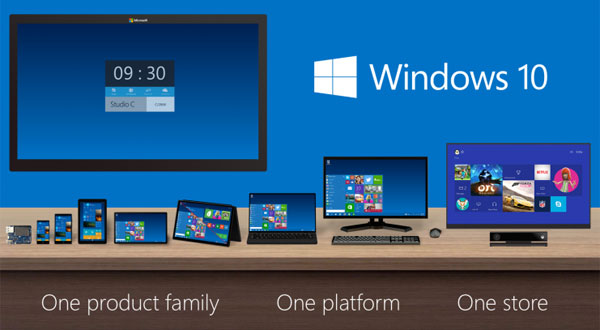 It’s especially hard to imagine now that these things typically are downloaded from the Web, and there’s no need to stand in line. However, if a company can do something once, that suggests it could do it again. Apple clearly spanked the entire cellphone market when it released the iPhone, through a process very similar to the one Microsoft used for Windows 95. I’m not saying Microsoft will do this — I’m just pointing out that it could (and looking back on Windows 95, just a little bit).

I’ll close with my product of the week: from Logitech, a nice small office/home office conferencing product that won’t break the bank.

What is funny and just a tad ironic about the success of Windows 95 is how quickly everyone, including Microsoft, seemed to see it as kind of an accident. Apple with the iPad, iPhone, and iPod actually used some of the same skills, but Microsoft never again — well, with the possible exception of the first Xbox — showcased the kind of marketing brilliance that the Windows 95 launch demonstrated. What is kind of funny is, when you look at the Apple Watch, it looks as though Apple may have forgotten this now too.

What Microsoft did right was to keep it very focused on the user/consumer, make it comparatively simple, and get folks talking about it as revolutionary months before the launch. Apple’s closest emulation of this was actually the iPhone, which it showcased months before its release. It didn’t actually work when it was shown, but promised to do a few things other phones didn’t do well — music and entertainment — and set the market on fire.

After Windows 95’s release, Microsoft brought out Windows NT and then gave the NT team control over everything. Given that Windows NT was the clean room copy of OS/2, the product that Windows 95 obliterated, it was kind of like the guys with the fastest car in the race copied the slowest and then wondered why they weren’t winning races anymore.

That’s pretty much what we are seeing now with the Apple Watch. The surprise isn’t that it’s not selling well — it’s that it is selling as well as it is. It showcases that there are a lot of people conditioned, like Pavlov’s dogs, to buy Apple stuff.

There’s an amazing little company in China that’s doing with phones what Visio does with TVs and Hyundai does with cars. It bundles in a mix of top components that folks care about and releases the phone at an aggressive price — and then make it hard to get, so it comes off as exclusive.

There are millions of people standing in a virtual line to buy its latest phone. Microsoft would kill to have nearly 4 million people lined up to buy its next Windows phone. One Plus shows it’s possible, even in an Apple-dominated world.

One of the biggest reasons the opportunity to pull a ton of share from Apple is so high is that it now seems to have forgotten its winning model — the one Microsoft forgot after Windows 95. The Apple Watch doesn’t have the “iWatch” name, and it doesn’t do a few things really well. Instead, it does a lot of things — many of them really poorly.

Apple seems to be emulating a PC-company-like strategy, throwing tons of features at the market in the hope that customers like some of them. While the Apple brand makes it the most successful smartwatch in the market, it certainly isn’t a revolutionary product like the iPod, iPhone and iPad were.

Another problem for Apple is that most countries either have killed subsidies or are in the process of killing them. Subsidies worked particularly well for Apple, because they concealed how crazy that phone’s price has become. Without them, the phone goes from a few hundred dollars to nearly a thousand bucks. That is a huge perceived price jump and one of the reasons the far cheaper One Plus Two is suddenly so attractive.

So, Apple is unusually vulnerable at the moment, and Samsung is having trouble holding Android momentum — both are showcased by One Plus’ success. Finally, smartphone technology is looking a tad unexciting at the moment. I mean — at some point, all of the phones kind of look like each other.

There are five things that I think could make a good chunk of the folks currently buying Android and iOS products think about moving to a Windows phone.

First is to come up with a forward-looking phone design: sturdier and more flexible; more carbon fiber than aluminum or steel; maybe a transflective display for outdoor use; far better battery life in a next-generation battery with higher capacity and faster charge time.

Second, wrap it with a set of features and services that will allow it to replace office and home hard wired phones completely. Flip it into a virtual PBX or key system, so both consumers and companies could see fast cost savings.

Third, take Cortana to the next level — either by using real people, like Facebook is, or using something like Watson, which we expect Apple to do.

Finally, create an application bridge through emulation, virtualization, or common APIs either on the device (we actually are starting to reach a point where there is performance headroom on phones like we have on PCs) or in a cloud service, so that folks can keep their favorite apps.

The funny thing about this is that Apple started out with a plan to put its apps into the cloud, but connectivity just wasn’t where it needed to be. Things have improved a lot over the last decade, and it’s time to revisit that approach.

One other way Microsoft could take the market is by evolving HoloLens far more quickly and making the smartphone obsolete. If you can put a display anyplace, and create a technology you wear like glasses — without looking like a glasshole, clearly an issue with Google’s Glass — you could flip the market, much like Apple did with the iPod, iPhone and iPad. Just make smartphones obsolete.

In the end, Windows 95 reminds us that Microsoft is capable of magic — it’s just been a really long time since it’s demonstrated that capability. Maybe we are coming up on its time. On the other hand, nothing says Apple and Google can’t do the same thing, and whoever connects the next set of dots will own the market. That’s something to think about as we approach the next iPhone launch.

At under US$500, the Logitech ConferenceCam Connect is actually a pretty amazing little product. It starts out costing about half what you’d pay for the least expensive room conferencing system I’ve yet tested.

It can fit in a backpack and some larger purses; it has full zoom and scan capability; it is almost fully self-contained (the power supply is separate). Further, it is wicked-easy to set up and use. As you would expect, it has twin noise-cancelling microphones and a decent clear speaker. The camera is Zeiss HD-level 1080p.

I’ve tested it with a CNBC Asia crew, and they loved it. It has a built-in three-hour battery and will connect to your laptop with Bluetooth, so you could do a conference call from the airport or your hotel room really easily. 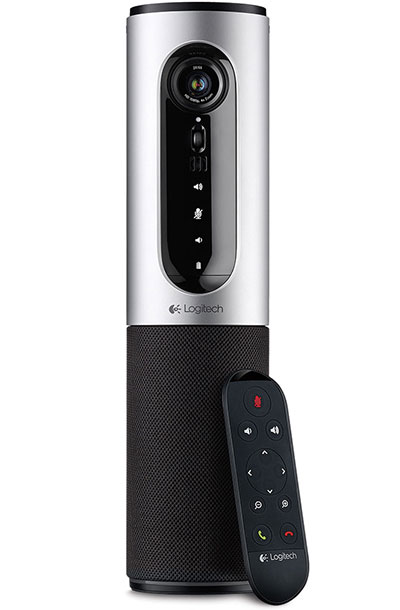 It supports screen mirroring, and you can connect it to a TV with the included HDMI cable for a full-room video conferencing experience. (I’m using mine through my Dell 34-inch curved desktop monitor.)