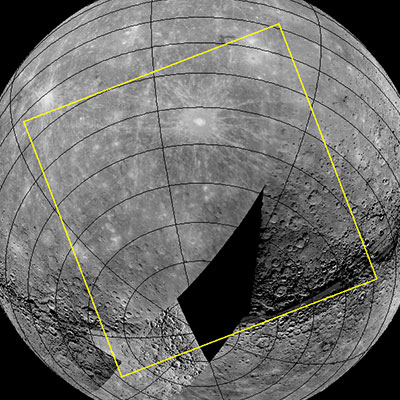 The graphic shown here outlines in yellow the planned footprint for the first image to be acquired from a spacecraft orbiting Mercury. The image will be obtained as MESSENGER is high above Mercury’s south pole and will include a portion of Mercury’s surface not previously seen by spacecraft. (Credit: NASA/Johns Hopkins University Applied Physics Laboratory/Carnegie Institution of Washington)

Messenger, however, will hover as close as 124 miles from the planet’s surface, sending data back that should capture some serious science, including Mercury’s wild climatological swings. Areas bathed in sunlight can reach 840 degrees F, while shaded areas can drop 1,100 degrees, hitting minus 350 degrees F, extremes the orbiter is built to withstand.

For seven years, Messenger has traversed the solar system neighborhood between Earth and sun, passing Venus twice and Mercury three times prior to the orbit. Messenger follows Mariner 10, a 1970s-era craft that photographed Mercury from farther out in space.

Little is known about Mercury’s makeup, so “a big part of the science will involve taking measurements that planetary scientists hope can tell them how and when, in the history of the solar system, Mercury formed,” said Aviation Week space coverage senior editor Frank Morring. “Given its position as the closest planet to the sun, that in turn may give researchers clues to the origins and history of the solar system itself.”

Even approaching a Valhalla-like planet such as Mercury is no easy task, and Messenger has experienced some trial and error on the way.

“During its third and final Mercury flyby on Sept. 29, 2009, Messenger had a power glitch and shut down about halfway through,” Morring told TechNewsWorld. Intriguing glimpses of discoveries to come must have kept NASA personnel enthused about the project, however.

“Before it shut down, Messenger’s cameras imaged evidence that there had been more recent volcanic activity on Mercury than had been thought possible,” Morring noted. “Its neutron spectroscopy also found higher concentrations of iron and titanium on the surface than could be explained by existing theories.”

After returning to Mercury, Messenger faced a number of challenges before entering orbit.

“It had to slow itself by 1,929 mph, using hardware that has been in space since launch on Aug. 3, 2004, and in the harsh environment near Mercury since its first flyby in January 2008,” Morring explained. “The orbital insertion burn lasted about 15 minutes and apparently went off without a hitch. So the spacecraft appears to have worked well under difficult circumstances.”

“The propulsive maneuver Messenger completed last night was not qualitatively more challenging than others carried out earlier in the mission,” he said, “but it was longer and consumed more propellant.”

Called “turn and burn,” the maneuver “involved turning the spacecraft during the fuel burn to make the most effective use of thrust to slow the spacecraft relative to Mercury,” Solomon explained. It was also do or die.

Though similar maneuvers near the planet were successfully conducted before, “there was no backup opportunity this time,” he added. “If last night’s burn did not go mostly to completion, we would still be in orbit around the sun and would not be in a position to try for orbit insertion again for another several years.”

Turn and burn could have meant something far more devastating if not for Messenger’s thermal protection system, Aviation Week’s Morring pointed out.

“Its thermal protection system is essentially a reflective sunshield and some heat pipes that act like radiators,” he said.

“The sunshield has to keep the spacecraft functioning at about 70 degrees F — room temperature,” noted Morring, “when the outside of the sunshield is seeing temperatures of as much as 700 degrees F.”