Hotel’s Robotic Butler Is Not Quite ‘Rosie’ 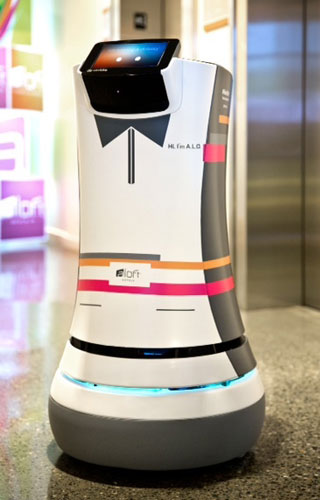 Aloft Hotels this week announced the launch of a new, robotic “butler” at the company’s Cupertino, Calif., location. Dubbed “A.L.O.,” the new botlr, or robotic butler, is designed to help the hotel’s human staff by delivering amenities to guest rooms.

A.L.O. comes professionally “dressed” in a custom shrink-wrapped, vinyl-collared uniform, complete with name tag. It accepts tweets instead of tips, said Aloft, which expects the robot to free up existing staff’s time.

“A.L.O. has the work ethic of Wall-E, the humor of Rosie from The Jetsons, and reminds me of my favorite childhood robot, R2-D2,” said Brian McGuinness, global brand leader for Starwood’s Specialty Select Brands.

Use of the botlr makes Aloft the first major hotel brand to “hire” a robot for both front- and back-of-house duties, Aloft said.

Created by Savioke, A.L.O. will facilitate and prioritize guest deliveries, communicate with guests and various hotel platforms, and navigate throughout the property — including the elevator — with ease, Aloft said.

The robot officially “reports for duty” on Aug. 20 in Cupertino, with several new botlrs to join in the upcoming months.

Aloft has something of a history of tech-friendliness. Prior to the launch of the brand back in 2008, parent Starwood Hotels offered a virtual tour of Aloft using Second Life.

“I think this is an important step towards getting what many people think of as robots into a more consumer space — as opposed to, say, NASA’s Mars rovers,” said robotics expert Mark Yim, a mechanical engineering and applied mechanics professor at the University of Pennsylvania.

“The most impressive thing here is the software that is robust enough to let the robot navigate through the hotel around people or obstacles 24 hours a day,” Yim told TechNewsWorld.

While many of us do envision The Jetsons’ “Rosie” when we think about robotic butlers and maids, thereby imagining “a kind of humanoid thing with a head and two arms,” that’s not A.L.O., Yim pointed out.

“This one has no arms — it has a lid, and people have to reach in and grab the stuff,” he explained. “It’s not going to be like a maid and clean things up.”

Such capabilities, however, are something Yim himself is working on.

“I’m planning for it to be feasible in a few years,” he said.

In the meantime, though, what’s missing is the ability for the robot to manipulate objects in its environment. A.L.O. can “see” people and objects around it, but it’s not fine-tuned enough to be able to manipulate or pick things up.

That, in turn, requires not just arms and a “way to grab things,” but also “more sophisticated sensing,” Yim explained.

“My first thought is, you have to start somewhere, as in utilizing what might be called ‘passive robotics’ for simplistic tasks like delivering extra towels or a toothbrush to hotel guests,” Charles King, principal analyst with Pund-IT, told TechNewsWorld.

Aloft’s announcement of A.L.O. is “too self-consciously cute to tell exactly how it will work, but I’m skeptical that it will be as — let alone more — efficient than having a staff member do the same thing,” King said. “After all, someone will have to load and program the robot for even the simple tasks it will take on.”

Still, “the nature of the hotel — one of Starwood’s chains that’s designed to appeal to young hipsters — provides some necessary context,” King pointed out. “This seems more like a PR gimmick than a serious attempt to leverage robotics in new scenarios.”