In the March 2010 Aberdeen benchmark report “Multi-Site and Campus-Area Wireless LANs: Advantages of the Centralized Approach,” 163 institutions were surveyed regarding their use of multi-site and campus-area (“non-site-contiguous”) wireless local area networks (WLANs).

This article provides an analysis into the pressures driving the higher education sector to 802.11n WLANs and how this affects the strategies and actions that they choose in response.

The Need for Speed

The demographics of the student population are accelerating this demand for full-speed wireless access throughout every corner of campus, both indoors and out. Every mobile device, smartphone, game machine, and media player is a potential consumer of mobile broadband access.

Students now prefer online entertainment portals such as Hulu, Skype and YouTube for their video intake, bypassing the traditional cable television already in place in dorms and classrooms. A well-implemented 80211.n infrastructure can meet the demand for greater throughput and corner-to-corner coverage.

Recent advances in education technology are creating additional loads on already-overburdened wireless networks. Video collaboration has taken center stage in teaching. Large digital images used in research and the arts are proliferating. Distance education is being looked at as a way to reach underserved student populations. Distance education can also turn production of content into a repeatable and durable teaching asset that can be utilized repeatedly and on-demand.

Intra-university collaboration between geographies, for example between U.S. institutions and those in Russia, China, India, Africa and South America, is also an area of growth. Typically, these exchanges include the sharing of large documents, remote data repository analysis, and video-based telepresence. The Internet2 initiative has been leading this effort, much of it leveraging high-speed fiber- and satellite-based communications. This high-usage model inevitably migrates on campus to “the edges,” where mobile access is assumed.

Universities without an advanced technology infrastructure stand to lose top faculty and top student talent. Students demand and expect state-of-the-art technology access, and perhaps equally important, their parents don’t want to spend thousands of dollars for a limited education. Faculty also demand the best tools that budgets can afford for research and advancement of their subject of interest. As a result, advanced technology infrastructure has become a recruiting tool to attract to the institution the most highly qualified student and faculty candidates.

The August 2009 report “Talent Acquisition Strategies 2009: Cutting through the Clutter and Proactively Managing Quality Candidates” found that between 2008 and 2009, the use of Web 2.0 tools for recruiting has more than doubled, and video interaction is one area where these tools are seeing the greatest level of adoption. As society at large becomes more comfortable with new ways of remote connecting, via video and text delivered to their personal computers and mobile devices, top organizations are seeing the benefits of remotely connecting and collaborating with potential recruits, leveraging them to benefit both the organization and the candidates. 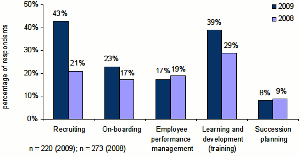 Figure 1: Use of Web 2.0 Tools throughout the Talent Lifecycle
(click image to enlarge)

With higher education’s appetite for greater throughput and performance, end-user adoption of WiFi 802.11n has begun to accelerate.

The May 2009 report “Wireless LAN 2009: From Network of Convenience to Business-Critical Infrastructure” found that 79 percent of Best-in-Class and 75 percent of Industry Average respondents either have current or planned 802.11n implementations, whereas the Laggards trail the Industry Average by 27 percent.

802.11n has the advantage of providing the performance and security of a wireline network at a lower cost of acquisition, installation and maintenance. It also enables institutions to upgrade their network infrastructure in older campus buildings where laying in new cable for wireline infrastructure would be cost-prohibitive.

The “Beyond Wireless — The State of WLAN 2009” report identified concrete performance advantages for users of 802.11n-based WLANs, as compared to those who had not yet adopted 802.11n.

As shown in Figure 3, the respondents that were currently using 802.11n experienced more than an 85 percent improvement in application response times over those that had not yet migrated. 802.11n adopters reported 57 percent more resilience to security attacks, indicating that many of them improved their security solutions at the same time that they upgraded or installed their 11n network. Aberdeen’s research also revealed that with a migration to 802.11n, organizations also moved more mission-critical applications onto the WLAN, making invulnerability to attack a higher priority. 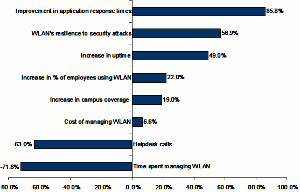 Note that these advantages are not without cost; 11n users paid more than 6 percent more to manage their networks than non-11n users. Some of this cost is associated with the equipment purchase of the 802.11n-specific hardware and software itself.

However, they attained significant cost savings in other areas (63 percent fewer helpdesk calls, for example) that are likely due to the improved bandwidth and range leading to fewer dropped data and voice sessions, and therefore fewer student, faculty and staff complaints. Almost 72 percent less time was required to manage the WLAN, indicating that at least some of the strategic action to reduce complexity through WLAN/wireline convergence had been achieved. They also saved 15 percent on their telecommunications costs, as fixed mobile convergence and VoIP solutions helped to reduce carrier service billings.

Learn how you can achieve a seamlessly integrated wired/wireless campus while maintaining the security of intrusion detection across wired/wireless networks by interacting in Aberdeen’s newest micro site dedicated to higher education wireless LAN.

Andrew Borg is a senior research analyst with the wireless and mobility practice at the Aberdeen Group. Gaurav Patil is a research associate with Aberdeen’s communications group.
Get Permission to License or Reproduce this Article

Different Strokes: One Multi-Site WLAN Does Not Fit All