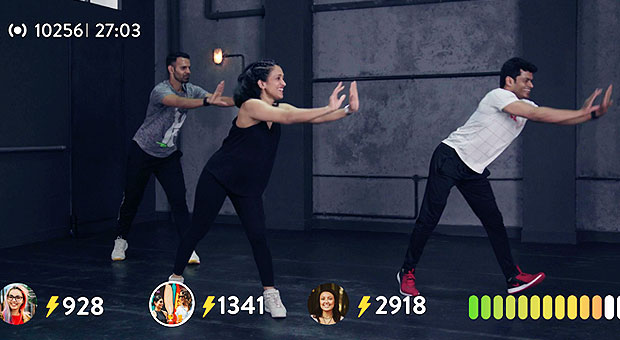 In-person workout sessions these days might seem like a thing of the past, while solitary workouts at home replace gym visits as an ongoing result of the pandemic.

The use of artificial intelligence is not yet a common feature in fitness apps, but it is a main component in a popular India-based app now focused on growing users in the U.S. and Canada. Bringing AI to personal workout routines at home could provide gym-starved exercise enthusiasts something new to sweat over.

Based in Bengaluru, India, in the center of the country’s high-tech industry, Cure.fit has raised US$400 million in funding. The developer’s app has become one of India’s leading fitness programs, claiming 300,000 subscribers. That popularity is spreading globally with more than 12,000 U.S. downloads since June.

Cure.fit may well be a few steps ahead of other fitness apps trying to bring new twists to humdrum exercise routines at home. The company leans heavily on big data and AI to drive user experience and growth.

The app lets users have a group workout session without leaving their homes. Many fitness apps have varying approaches to coaching users through their training sessions. So it may be marketing hyperbole to judge the excellence of one fitness app over others.

Artificial intelligence is only part of what drives Cure.fit, according to Shamik Sharma, head of international business at Cure.fit. While a number of fitness apps are available worldwide, what makes Cure.fit unique is that it focuses on everything having to do with the mind and body.

“The app offers holistic health offerings across physical fitness and workouts, healthy food, and mental well-being,” he told TechNewsWorld. In regions outside of India, app users do not have access to those ancillary parts of what Cure.fit offers users in India, at least not yet.

Ahead of the Curve

“AI is not that common in fitness apps today, but we are starting to see it used more frequently to manage and track tracking fitness data and related trends. The use is emerging and becoming increasingly common,” he told TechNewsWorld.

If done properly, AI could be quite viable in consumer applications. But AI needs to be used in such ways to give real insights to users of these apps.

“Right now some of the best examples of AI in consumer apps are capabilities like Spotify’s ability to determine what songs to play or suggest based on listeners’ behaviors. In a similar fashion, AI could be used in fitness apps to suggest foods or help manage eating habits and generate optimal workouts for users,” Hatch said.

Mukesh Bansal, who co-founded and serves as the CEO of Cure.fit, and co-founder Ankit Nagori, launched Cure.fit in 2016. Both are fitness enthusiasts who saw a need for something all-encompassing in the space.

They entered the crowded app field for fitness, recipes, and meditation; but noticed that none integrate all three of those elements together. They developed Cure.fit to fill that gap. The co-founders recently launched a freemium model to supplement the free app version.

The Cure.fit app is available globally. However, the company is currently focused on localizing it for the U.S. and Canada markets, said Sharma.

He described the company behind the app as a one-stop-shop that meets the demands of everyone’s self-care needs. As a newly launched app in the U.S., they are starting slow but plan to expand on a similar level as they offer in India.

In India, Cure.fit offers an additional vertical for healthcare where elite doctors are available for teleconsultations. No competitor in India does that, remarked Sharma.

“In India, we have gyms, kitchens that cook healthy meals, and a food delivery service that delivers meals and groceries — in addition to everything we offer on the app,” he said.

Researchers concluded that exercise app users are more likely to exercise during their leisure time, as compared to those who do not use any apps. The research also found that exercise apps made it easier for users to overcome “barriers to exercise.” That is a polite way of saying non-users tend to procrastinate, lack motivation, and such.

That study did not consider the impact of artificial intelligence programmed into the exercise apps. Adding the AI element takes healthy exercise routines one step further — or maybe more.

Today 80 percent of Americans own smartphones, and 21 percent nationally have wearable fitness trackers. Smartphone, laptop, and tablet users have access to over 92,000 fitness apps available on U.S. app stores, according to industry reports.

A 2016 study by Mary Jung, then an assistant professor in Canada’s UBC Okanagan School of Health and Exercise Sciences, found that mobile apps provided an opportunity to provide real-time feedback and support to the public and specialized health populations. Her research found that fitness apps are more effective when they are personalized.

Cure.fit uses a proprietary AI-powered ‘Energy Meter’ (pictured above) to help users see the results of the effort they put into each workout. It keeps users engaged and motivated throughout the entire class.

Once a user turns on the mobile device’s camera, he or she can track every body joint. The combination of features approximates the amount of energy users spent in their workout. Based on each workout performance, the app assigns an energy score which enables competing with others to obtain a class ranking at the end of each session.

That has become one of the app’s most popular features, noted Sharma. Users enjoy staying active in the live workout class and being able to compare their energy levels to the teacher and other classmates.

“They also enjoy getting a weekly report showing their progress. We have other well-liked features including getting notified when the class is going to begin and easy-to-follow healthy recipes that show pictures of the ingredients as well as video and step-by-step instructions. In India, our dance classes, especially Bollywood dancing, are very popular,” he added.

This process makes users feel they actually belong to an exercise group. The app lets them compete with others in real-time and tallies weekly progress reports. Cure.fit’s approach seems to effectively hit the personalization mark mentioned in fitness app studies.

Cure.fit offers users a variety of live classes whenever they want to exercise. The classes range from 35 minutes to one hour. World-class trainers and athletes teach the classes that include dance, yoga, cardio, strength, and Pilates. Users also have the ability to invite their friends to join the session.

Reporting to an exercise class is simple using the Cure.fit app. It basically is a four-step process.

First, press the “Join Cult.live” at the top of the app. Next, select a class at a preferred time. Third, turn on your device’s camera to join a live session. Last, activate the Energy Meter so it can scan your body to see your energy level.

This scanning part is essential to the training process. It lets you know if you are going too slowly or too rapidly to help you stay on track. At the end of the session, you will receive a ranking.

According to the developer, the Cure.fit app does not save any user performance data. So there should not be concerns about data breaches or misuse of any personal information.

The app provides do-it-yourself content such as workout videos and meditation sessions that users can download as desired.

The free version remains available, at least for now. The freemium model offers some of the same free content, but it pushes paid access for what the company calls a better experience that includes access to more content and better technology features.

The paid-online classes will be 20 per cent of what they pay for Cult.fit fitness centres. There will also be a free trial period for specific hours of content. Home fitness classes seem to be a business continuity plan for the offline fitness centers.

“Currently, the Cure.fit app is free to all users. We will be switching to a subscription model towards the end of the year. Users will continue to be able to access some of the award-winning features at no cost and for nominal monthly fee, have access to much more content including MasterClasses and Live classes,” said Sharma.

The app offers users a variety of workouts from which to choose. The options are categorized under strength-based workouts or cardio-based dance fitness workouts.

“In dance fitness, we offer a mix of popular Bollywood and English songs that bring fun to fitness. We also give access to celebrity/ influencer fitness master trainers that we have on-boarded who take classes on our app,” he explained.

The process is simple. The user downloads the app on iOS or Android and chooses what they would like to do. They can join live or on-demand workout or mediation classes or cook healthy recipes.

“We have found that live classes have been especially popular during the pandemic where people miss going to the gym and being around other people. This feature gives the user the feeling of being in a live class with zero risk of getting sick. It’s a win-win,” said Sharma.

Under the Hood and Beyond

The app’s unique features such as the energy meter and gamification are all built in-house and are proprietary. Almost the entire infrastructure, features and reports, that are present for the various verticals like telemedicine, nutrition consulting, personal training, and small group training are all built in-house, according to Sharma.

“We have taken help from a few 3P partners but have customized it all to suit our needs,” he said.

Currently, the app feeds live classes with fitness, meditation, and recipes on the U.S. app. The company is working on integrations with Apple Watch, Apple TV, Fitbit, Roku, etc.

“We intend to launch a more detailed fitness offering, therapy services, and nutrition consulting over the course of the year,” Sharma said.