People don’t trust their governments for a good reason. Governments lie to them regularly. In the ongoing COVID-19 event, we in the U.S. initially were told that there was little risk. The first 15 people who came to the U.S. with the virus soon would get well, and the event then would be over.

We were advised to go about our day — and many people did. They got on planes, departed for cruises, and went about their lives.

We were told not to wear masks. Moreover, we were told that wearing them might make us more likely to get sick — and that advice didn’t come only from Republicans either. Now we’re being advised that everyone should cover their faces in public.

The level of distrust in government appears to be at an all-time high when we need to follow government shelter and social distancing rules actively. We are still seeing pictures of parks and beaches crowded with people. Too many people still don’t understand that 25 percent of those who have the virus and are spreading it have no symptoms.

Once testing ramps up, how are those people going to deal with the fact that the relative they visited may have died as a consequence?

I’ll share my perspective on that and then close with my product of the week: Cisco’s Country Digital Acceleration Program, which has been a massive success in Turin, Italy, helping the city become a beacon of hope during the past hideous few weeks.

This problem is hardly just a U.S. problem, as it seems that almost every government initially downplayed the virus only to reverse itself when the impact of the illness overcame the various coverups. This practice began in China where the virus might have been, but wasn’t, contained.

Bill Gates not only predicted this pandemic, but also identified the area where it would originate. We could have saved trillions of taxpayer dollars just by making sure there were strong early warning monitors in that area in case he was right — which turned out to be the case.

Given that two pandemics — COVID-19 and SARS — likely originated from the same region, the world should demand ongoing monitoring to prevent the next pandemic from arising there. If China refuses, it should force China to pay for the resulting economic impact.

The real danger is that if people don’t trust the government, they won’t follow social distancing guidelines. There is also a good chance that once a vaccine is developed, many won’t take it. The amount of distrust surrounding this pandemic seems unprecedented — and anti-vaxxers effectively brought back the measles.

Lying to us about the need for masks was incredibly stupid (here is an explanation of how a sneeze from someone without a mask spreads).

Saying there wasn’t a problem was crazy. Arguing that older people would be OK with dying to protect the economy was insane. If government(s) can’t be trusted, then don’t be surprised if citizens don’t listen. We need citizens to listen.

CEOs who surround themselves with yes men and women tend to fail. The CEO who gets only negative feedback almost certainly will fail in spite of doing a good job. I would argue that if advisors are either continuously positive or consistently negative regardless of what a CEO does, the chief will avoid the always-negative advisors and fail, having not been able to learn from mistakes. If we fixed this feedback problem, we could improve the effectiveness of any administration regardless of party.

Recently I’ve been impressed by California’s Democratic Governor Gavin Newsom. He went on CNN (picked up by Fox News), and praised the president for what he was doing right. As a result, Newsom is getting far better support for his state. Better support will save lives, and that is the goal — not making political points.

Right now the goal is to save lives — not get elected. Dead people don’t vote. Reelection comes more naturally for leaders who execute. This year is an election year, and I have no doubt that once the national campaigns take off again, the blame will get vetted fully, but we still have months to go and a lot of lives to save before that. Let’s focus on what is essential now, and being universally critical is counterproductive to the effort of saving lives.

Being universally positive likely doesn’t help either, but I don’t think it has as significant a negative short term impact.

We should use Bill Gates as an example. He isn’t focused on blame — he is focused on fixing the problems we have today. Blame doesn’t fix anything. We can play politics when we aren’t in as much risk of dying.

We are working like the COVID-19 event is a one-time thing, and we pretty much did the same job with SARS. It’s likely there will be more pandemics — and there’s nothing to indicate that COVID-19 is going anyplace. It may be seasonal, it probably will mutate, and that means we will have a new regular flu event — and the new flu is 10 times more fatal than the old flu.

I’m still struggling with the fact that we were OK with 12K to 61K deaths a year due to the old flu (that’s in the U.S. — worldwide, it’s 291K to 646K), but we’re not OK with 2 million deaths potentially resulting from COVID-19. If I were one of those 12K to 61K victims of the old flu — or one of their relatives — I’m not sure I’d see the difference. (For perspective, the U.S. lost around 58K troops during the entire Vietnam War.)

Our behavior needs to change so that viruses like COVID-19 can’t spread as quickly, to make sure those who are the most vulnerable don’t die due to our unwillingness to break social conventions permanently. We don’t need to kiss as a greeting. We don’t need to shake hands. Also, we should stay home when we’re sick.

I also think that if we are going to ask people to work during times like this, we shouldn’t just give them protective clothing and better paid sick leave. We should also provide death benefits so that firms don’t think it is cheaper to replace a dead employee than it is to keep them from dying.

Were death benefits expensive enough, they automatically would fix the lack of employee protection, because it would make an employee’s death more costly than protection, and companies are financially driven.We need to adjust the employment laws so that companies and people are motivated to do the right thing — including getting vaccinated. If we don’t, this won’t be the last time we have to shut the country down, and there is a reasonably good chance that many of us won’t survive the next time (assuming we survive this time).

If people don’t trust their governments, then they won’t follow government guidelines, and the results from events like this one will be far more dire. If people, particularly politicians, praise and criticize based more on their political beliefs than on the truth, politicians won’t do what we want and need them to do, which is to make the right reliable decisions.

Trading lives to protect the economy not only should not be done — there should be every effort to make sure that kind of choice is never necessary (and I’m speaking as a boomer who effectively just landed on the “OK to die” list).

We need to start thinking strategically. How do we prevent the next pandemic? There likely will be a next one. We need better early warnings, better long-term behavior changes, and changes to both governmental and company policies, so that everyone rewards good behavior and universally penalizes bad behavior.

Trusted data during events like this is critical. As I was finishing this column, I became aware of a new resource, GNU Health, which uses the open source model and aggressive collaboration to get ahead of the next virus. It’s worth checking out.

Last week, I had a chance to talk with the mayor and vice mayor of Turino — Chiara Appendino and Marco Pironti. Cisco aggressively worked with the Turino government back in 2016 and was part of a collaborative effort initially called the “Turin Lab,” which recently underwent a name change to “Turin Love,” because its focus has become connecting isolated people with loved ones. The Cisco CDA Program exists for this kind of opportunity.

I’m pointing this out because in Turin, they appear more focused on fixing problems than on blaming each other for mistakes, and the result is real progress. They’ve set up WebEx systems in prisons (this is broader than just Turin) as well as in retirement homes, so that people don’t have to visit these locations physically to talk to loved ones.

Cisco’s Networking Academy already has been implemented both in prisons and in charitable facilities focused on homeless people, to help people in both groups get well-paying jobs. As a result, systems already were in place that could be re-missioned easily to address the current pandemic. 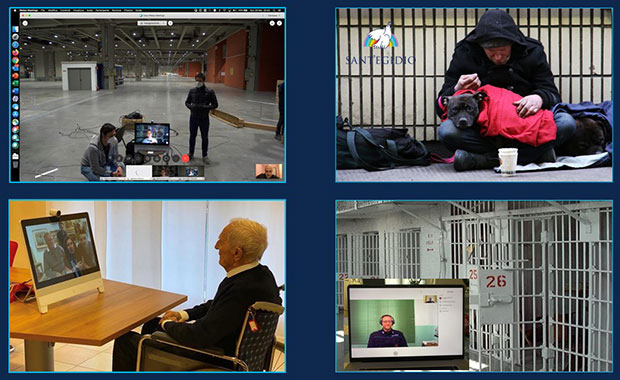 Because of the deep integration between the city and Cisco, they were able to move City Council meetings to virtual meetings in four days, over a weekend, minimizing disruption. Turin now is a shining example of how technology companies like Cisco and cities like Turin can collaborate to address national catastrophes.

I was impressed with Guy Diedrich, Ph.D., who runs the Cisco CDA program, and Agostino Santoni, who helped drive the effort in Italy (though he was kind of slow getting a WebEx system for his mother).

Also, I was impressed with both the mayor and vice mayor of Turino, who created the technology foundation that allowed the city to pivot quickly to enable effective social distancing and protect some of the most vulnerable citizens there.

Because the Cisco CDA Program is an excellent example of how companies and politicians should behave, it is my product of the week and a program that other OEMs should consider emulating for the good of all of us.