Google Sticks It to the Home Entertainment Market

Google on Wednesday unveiled a new Nexus 7 as part of its latest assault on the market for the connected living room. 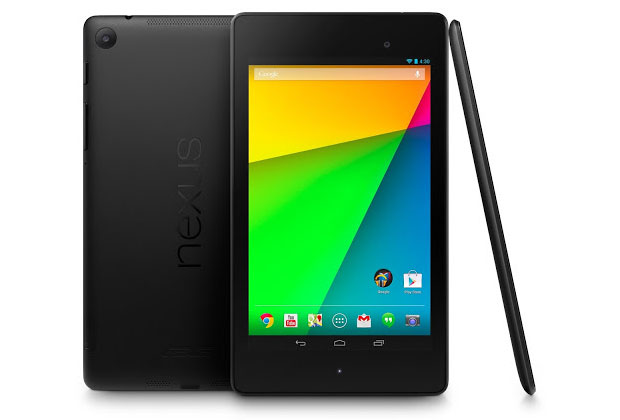 Another prong of that attack is Chromecast, a streaming content stick that plugs into a TV set’s HDMI socket and lets users stream videos and other content seamlessly between the TV and any connected device, ranging from smartphones to tablets to laptops.

The Nexus 7 “is a value line that competes more closely with the Kindle Fire [than the iPad],” Rob Enderle, principal analyst at the Enderle Group, remarked.

The Nexus 7, developed with long-time partner Asus, has the same 7-inch screen as its predecessor, but the bezels are almost 3 mm narrower on the sides. It is 1.7 oz lighter and 2 mm thinner than its predecessor.

The tablet integrates Fraunhofer surround sound technology; has a 1.2 MP camera in front and a 5 MP rear camera; and sports a Qualcomm Snapdragon 1.4 GHz quad-core processor.

The WiFi versions can be preordered now from Best Buy and will go on sale July 30 on Google Play. The 4G LTE model will be released later.

The new Nexus 7 runs the latest version of Chrome. This lets users browse any site without having to zoom in. It has an automatic translation feature triggered by tapping the word “translate” in the bar at the top of the browser screen.

The Nexus 7 “remains a better value than the iPad mini, but folks buy the mini because they like the Apple brand and customer experience, and they are locked into the Apple ecosystem,” Enderle told TechNewsWorld.

Target Markets for the Nexus 7

Google has teamed up with five publishers — including Pearson, McGraw Hill and Wiley — on an app that will offer science, math, law and accounting e-textbooks on the Nexus 7. Students can purchase the e-textbooks or rent them for six months at an 80 percent discount.

The e-textbook app will be available on Google Play in early August.

For gamers, Google is shipping the Play Games app, which brings a social hub to Android, with the new Nexus 7. The app is available now from Google Play.

The Nexus 7 is the first tablet to use the Open GLS 3.0 technology, which produces even greater realism in games. Several new games, including Riptide GP2 and Prince of Persia 2, are available on the new Nexus, and more will be coming. All will incorporate the Play Game technology.

For online videos, Google has unveiled Chromecast. Based on a simplified version of Chrome, the device runs on all operating systems. Users plug the Chromecast stick into a TV set, go to YouTube or Netflix on a connected device, click on the “Chromecast” button displayed on the video app, and the app turns on the user’s TV and begins streaming the video. 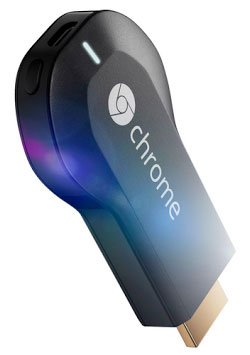 Users can read emails or work on the device they used to launch the video while it’s running on the TV. Further, a user can launch a video with an iOS device — then switch to an iOS or Windows device to continue controlling the video.

Users can also call up music from services such as Pandora and play it on their TVs. They can switch content from the TV to any device seamlessly.

Chromecast signals “another skirmish in the battle for the living room, and now [Google is] taking on the likes of Roku in addition to Apple TV and other set-top boxes,” Andrew Eisner, director of community and content at Retrevo, told TechNewsWorld.

“This is part of the ubiquitous computing move that has been around for awhile,” Eisner continued. “Google has raised the bar a notch by making it easy to move content from one device to another.”

Chromecast is launching as a beta.

The Chromecast stick retails for $35. It became available in the United States late Wednesday from Amazon, Best Buy and Google Play online.

It will be available at Best Buy stores across the U.S. starting July 28 and comes with three months of free access to Netflix for a limited time.

Developers can modify their apps to leverage Chromecast using the Google Cast SDK.

Google is publishing a developers’ preview of the SDK for Android, iOS and Chrome, available on Google Play.

The SDK will work with YouTube, Netflix, Pandora and other apps.

It will run on Android, iOS, and Chrome for Windows and for Macs, as well as on the Chrome OS for notebooks.

The technology will be embedded into various devices from Google partners.