Google Keep May Not Be a Keeper

Google on Wednesday launched Google Keep, a mobile application designed to let users store notes and checklists in a way that could compete with popular productivity app Evernote. 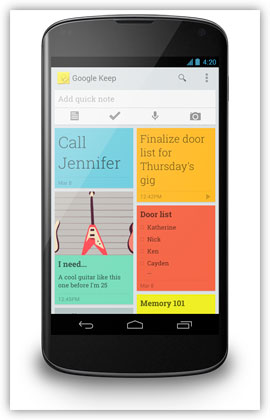 Keep allows users to tap out a note or checklist, or record a voice memo that it will transcribe and store. Notes can then be synced to other Android devices or shared to services such as Google+, Gmail or Twitter.

In addition to note-taking, Google Keep users can take and store photos in the app, then use Android’s camera editing features like photo filters and cropping. Users can pin the photos to checklists or notes, or share the photos via social networks such as Facebook or Instagram.

Google Keep’s mosaic interface is simple, but allows users to customize the color of their notes and add photos. They can also choose the view they’d like — single or multi-column — and can drag-and-drop to customize note arrangements.

“It used to be that functionality drove applications and desktop services, but with mobile that changed significantly,” he told TechNewsWorld. “Now design is key and just as important, if not more important, than functionality. If you look at Google’s recent app history, they’re really making a strong push to have great mobile experiences as well as functionality.”

Google Keep is only available for Android versions 4.0 and above via Google Play. The service is also accessible online, and the company said that soon users will be able to access, edit and create new notes from Google Drive.

It’s too early to know whether Google Keep will be able to compete in a market that’s crowded with more established apps such as Evernote, said Facemire, especially considering there are features Google hasn’t included yet in the app.

“One of the stark shortcomings of the app was the lack of integration,” he said.

A tech powerhouse like Google, with its Android operating system, will likely add more integration features that could tie users more completely into the ecosystem. Google could have all that coming soon, said Chetan Sharma, president at Chetan Sharma Consulting.

“The integration with the OS can possibly make it more interesting and useful than other apps, but it is hard to say how seriously Google is invested in the service,” he told TechNewsWorld.

Even more important for Google Keep would be if the company can use its core search business to further develop the app and help it stand out from the crowd, said Gerry Purdy, principal analyst at MobileTrax LLCand GigaOM Pro.

The app does have a search function, but it operates more to find notes and photos already stored within Google Keep.

One of Evernote’s most helpful features is being able to scan a photo and perform optimal character recognition. With Google’s background in search, it could work to make a similar feature on Google Keep even more valuable, said Purdy.

“Search is the key to making these note-taking apps work best,” he told TechNewsWorld. “But they will need to make it work in a clever search, which is more than regular web search.”

As the service stands now, Evernote shouldn’t be worried about a Google Keep coup, Facemire said. Google Keep’s early adopters might be Android users hearing the buzz about the new app, but they haven’t tried Evernote or other similar services, or don’t need the complex services that other apps can provide.

“A lot of folks might not need Evernote, but want something for more simple to-do lists or a grocery list,” he said. “Some folks are new to needing something like this and feel that previous offerings were more than they wanted with an app.”

Ultimately, even if Google doesn’t create the finest note-taking app available, it is still achieving one of its goals — getting as much data from its users as possible to help the company’s endgame, said Facemire.

“In the end, more data is going to be going through their system,” he pointed out. “Then they’re able to create a much better personalized feel for the user, which drives the business through advertising.”