Gnome Commander, an advanced twin-panel graphical file manager for the Linux OS, brings back memories of mypre-Windows days. That is an era when graphical shell programs werepopular before the Microsoft DOS (Disk Operating System) desktop gaveway to the Windows 95 GUI (Graphical User Interface). 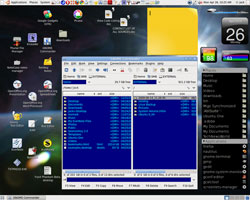 If that sounds like a put-down for Gnome Commander, I do not mean itthat way. Linux has come a long way in recent years to equal orsurpass the icon-driven desktop that Microsoft mimicked from Apple’s desktop design. A two-panel file manager forany OS is sometimes a must-have tool. Nothing says fast and efficientlike a good file manager app when it comes to working with files.

Gnome Commander has the look and feel of these early file workhorseprograms like Norton Commander and Midnight Commander. Not all filemanagers for Linux are created equal. As its name suggests, GnomeCommander is designed to run on Linux distros based on the Gnomedesktop. Its powerful feature set puts Gnome Commander in an advanceduser category among the likes of Krusader twin-panel file manager for KDE and the Thunar FileManager.

The full range of file management tools is available for all files ineither panel. This puts everyday tasks such as renaming files, sendingfiles, copy/delete/paste, open with and execute a right-click away.

Gnome Commander is a life-saver when it comes to synchronizing files.I work with numerous desktop and laptop computers that often neednon-networked access to each other’s files.

So I rely on thumb drives and external hard drives. GC lets mehighlight the same file name or directories in two locations andcompare the differences. I also can use the file manager’s syncfeature to move older or newer files between two locations orduplicate a directory.

The Connections menu provides a quick hook-up to remote servers.Although this allows FTP file transfers, it is also a handy way tosync files with remote locations when necessary. If nothing else, thiseliminates the need to run a separate FTP application.

A few features built into Gnome Commander are not typically found inother Linux file managers. For example, you can extend the mousecontext menu to call any external application to work on selectedfiles or directories.

This includes viewers, editors or custom scripts. GC does not have itsown viewer modules. Instead, it taps into system apps. For instance,it opens a text file in the installed application such as gEdit orOpenOffice Writer. It opens a photo file with the Gnome Image Viewer.

I particularly like the Quick Device access buttons. With most Linuxdistros, you have to manually mount external media like externaldrives, USB devices and cameras. GC does automatic mounting andunmounting. Like the FTP feature, auto mount is one more plus in theconvenience factor that GC provides.

Power users can easily drool over the feature set included in GnomeCommander. Some of the additional power user tools include the abilityto view the latest accessed folder history and SAMBA access.

The searching tools are fast. This makes is quick and simple to dofile name searches in the current directory and symlinking.

Something I wish were available in more apps I use is the ability todo advanced renaming of files. GC does this with support for varioustypes of meta-data.

Earlier versions of Gnome Commander lacked a built-in browser frocompressed files. That same weakness exists in the latest version1.2.8.5, released on Feb. 14. This is a serious oversight for anotherwise excellent file manager.

But there is a work-around. Download and install File Roller. [*Correction – April 28, 2010] Then open the options dialog and go tothe Programs tab.

From there you can add setting to allow GC to handle archives. See thesettings here andhere. Once done, you can right click on any file or folder and choose Create archive.

This is not a big deal. So I wonder why the GC developers have not yetgotten around to building this directly into the current release sousers do not have to deal with tweaking.

Keeping track of available storage space can be an annoyance in Linux.Gnome commander helps to remedy this situation. It shows the amount offree space for the storage devices displayed in the panel. So I cantell at a glance how much space remains on the hard drive and the USBdrive, for example.

*ECT News Network editor’s note — April 28, 2010: The original published version of this story incorrectly referred to the program as “Filetroller.” The correct name is “File Roller.”
Get Permission to License or Reproduce this Article