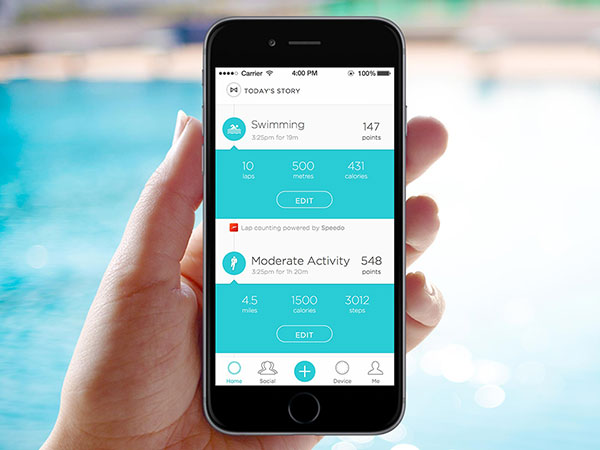 Welcome to Gadget Dreams and Nightmares, the column that searches for the gadget announcements that’ll put a spring in our step while attempting to steer clear of those that’ll make us drag our heels.

On the trail this week are a fitness tracker for swimmers, clever goggles to keep you on track, a Bluetooth stick for cocktails, and a ring that tracks sleep.

Note — these are not reviews, and the ratings relate only to how much I’d ever wish to try out any of these items.

As an occasional swimmer, I’d like a better way of monitoring how well I’m doing in the pool. It’s not so easy to use a stopwatch on my phone as it is while out for a jog. So, Misfit is looking to bring wearables to the water with a new version of its Shine activity tracker, developed in collaboration with Speedo.

The Speedo Shine (pictured above) apparently can monitor your progress on laps across all types of strokes. It transmits its lap and distance data to your iOS or Android device. It also can track your other physical activity and sleep patterns. You won’t have to worry too much about recharging, as the battery lasts for up to six months.

While I’m largely unconvinced about wearables for personal use, I like the Shine’s ability to track activity both in and out of the pool. The alleged six-month battery life is attractive as well — the lack of a screen helps conserve power — so this is one fitness tracker I’m actually interested in trying. Just make sure I get out of the pool at some point before dark, please.

Rating: 4 out of 5 Doggy Paddles

Staying the course on aquatic wearables, OnCourse is a pair of goggles designed to help swimmers stay on track in open water.

When wearers view their destination and click the middle of the goggles, the system apparently keeps them on a straight line as they head toward their target. An LED on each lens informs a wearer who is going the wrong way.

Judging by the Kickstarter campaign, these are aimed at triathletes — but I have difficulty staying in a straight line in the pool sometimes, so they might prove a boon to both me and those with whom I share the gym’s swim facilities.

Honestly, I think there could be something in pairing this with the Speedo Shine to help keep swimmers on track and help them reach that personal best they’re looking for. A smart idea, here.

Rating: 4 out of 5 Murky Depths

Of course, once you’re done with a long day at the pool or the lake, chances are you’ll want to relax with a tasty beverage. If, like me, your cocktail-mixing skills leave something to be desired, however, or you’re too beat from all that working out to focus properly, then you might need a little help in concocting the perfect blend of booze.

So, here’s the MixStik to help out. Right off the bat, I like the name — it’s to the point, not too clever, and it gets at what this item is all about. It’s a Bluetooth stick that you connect to your smartphone, and once you’ve decided which drink you’d like to make, it seemingly will help you get the right proportions of each ingredient.

The LEDs on the stick show how much of each component you should add. Just in case you’re using an odd-shaped glass, there’s a ruler function to show MixStik what you’re working with. There’s also an option to tell the app what you have in stock at home, and it will suggest cocktails for you to try.

I think many of us would enjoy cocktails more if they had the proper proportions. I’m not overly enthusiastic about using measuring spoons and cups to get the right quantities of ingredients, because I guess I’m a lazy millennial (give me a break, I’ve been swimming all day). Give me a thing I can throw in a glass that tells me what to do.

Rating: 4 out of 5 Bottoms Ups

When you’re ready to nap from all that working out and relaxing, you might want to learn how effective your sleep is. Sleep trackers are everywhere — though here’s one that stays on your finger rather than on your wrist.

Smart ring Oura apparently detects when you fall asleep and tracks your heartbeat, motion and temperature while you’re in the land of nod. It sends that data to a smartphone app to monitor sleep patterns.

I feel like I should hate it, given how much I despised the loved-one-only-notification smart ring I discussed last week, but somehow Oura seems useful and unobtrusive enough to take for a spin.

It looks like a passable piece of jewelry that you wouldn’t quite pick up on as a connected device at first glance.

It’s a shame that at US$229 on the lowest Kickstarter reward tier, it seems too expensive. I’d need to forego sleep to work more to justify the cost, which would defeat the purpose.