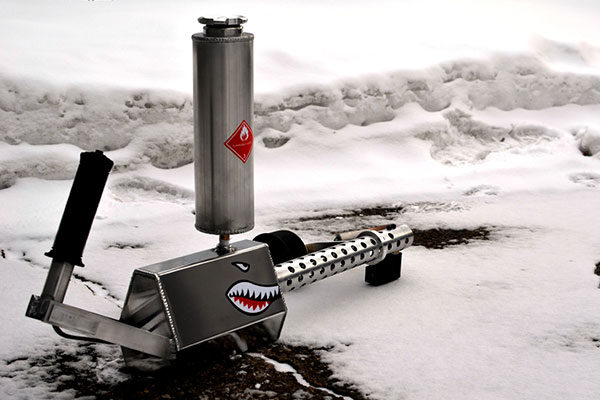 Welcome to another edition of Gadget Dreams and Nightmares, your guide through the tundra of drab gadget announcements toward the oasis of wondrous gizmos. Or is that just a mirage?

In our garden of luscious, possibly nonexistent flora this week are a crowdfunded flamethrower, a liquid-powered watch, and a safe that helps you trick yourself into doing the right thing.

The ratings mean nothing, other than to suggest how interested I am in using each item.

Also note that these are not reviews, and I haven’t actually tested out the flamethrower on the ice that’s still somehow on the ground at the end of March.

Someway, somehow, it’s apparently legal to own the XM42 flamethrower (pictured above) in the United States, unless you happen to live in California or Maryland.

I can’t fathom any circumstance under which a weapon — let’s not mince words here — capable of shooting flames 25 feet should be available for anyone to pick up if they have US$700 lying around to back Ion Productions’ crowdfunding campaign.

That said, it’s incredibly cool and fulfills all my childhood superhero fantasies.

As an adult, I would love to see these portable, handheld flamethrowers used for snow clearing.

No one has found a workable solution to living comfortably in the northeast of North America from December to April with all the obstacles that entails, so why not give it a shot?

Rating: 3 out of 5 Melting Snowmen

We’ve talked a ton about smartwatches around these parts over recent months, so it’s about time to take a look at a slightly more regular timepiece.

HYT’s H3 uses a liquid-mechanical hybrid to tell time. It pushes liquid through a narrow tube, which indicates the hour, while a hand slides along a 60-minute readout to indicate how far into that hour we are. 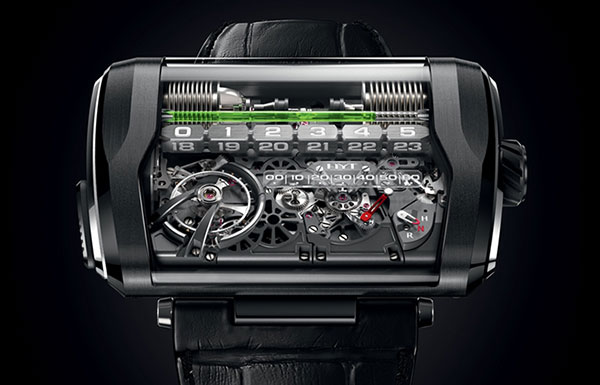 It’s visually impressive and would no doubt be a powerful talking point at parties. They would have to be fairly high-end soires, however, as the H3 will set you back $290,000 if you can get your hands on one of the 25 limited-edition pieces.

For that cost, I’d at least expect it to tell me the time more accurately. I mean, at least the Apple Watch will have a precise time rather than an ambiguous minute hand.

Rating: 3 out of 5 Oddly Imprecise Watches

Speaking of the Apple Watch, one of my main issues is the battery life. I’m enormously skeptical that it would be able to last me through a day and surely would find myself getting quite irritated with a watch I needed to charge every night.

So I’m glad to see someone is already taking up the challenge of a portable external power source for the smartwatch. Nomad’s Pod has a dedicated port to charge the Apple Watch, and it can give the device four full charges before it needs a recharge of its own.

It’s not just the Apple Watch it powers, as the Pod has a USB-C connector for hooking up to the new MacBook. It comes with a regular USB connector and micro USB charging port for extra connectivity.

At $60, it seems a solid, affordable backup power supply for the Apple Watch. If only there were a way it could power down some of the hype for the thing too.

Rating: 4 out of 5 Power Cores

I’m the first to admit that I would benefit from a little more time at the gym, working on my physique. I want to as well — but it’s ever so easy to kick back on the couch to consume garbage on Netflix along with garbage junk food.

Trying to do a little something to heighten motivation is kSafe, a smart safe that unlocks only when the user has accomplished certain self-created tasks. The key is to motivate people into doing short-term activities for instant rewards — which is arguably more of a motivator than a long-term goal like chiseled abs.

As the crowdfunding campaign video suggests, you could lock your TV remote in the kSafe. Maybe a game console controller. Or perhaps cookies. It unlocks only after you’ve achieved some personal goal that you set for yourself.

After you’ve achieved a certain level of activity (like a defined number of steps, tracked by your smartphone or fitness tracker), checked in to a certain location (e.g., a gym, library, or the middle of a park that only has footpaths), or waited until a certain time of day, the safe unlocks and you can enjoy your reward.

In theory, it’s a great idea. I have sorely lacking willpower skills. That’s just the thing, though — I can’t see how kSafe solves that problem.

TV remote locked away? I’ll just watch Netflix on my smartphone — I can’t lock that away, or I’d never be able to free it. Need to walk 10,000 steps to reward myself with some cookies? I’ll just walk 400 to the grocery store and buy some more, thanks.

It doesn’t solve the problem when there are so many ways to cheat the system. The only way it’d work is if a network of kSafes held all the world’s treats to stop me from keeping a Mars bar in my pocket while out jogging. So kSafe solves an immediate problem of motivation, but it can’t solve a cultural one.

That said, it would completely halt my midnight snacking habit, so it gets my stamp of approval.