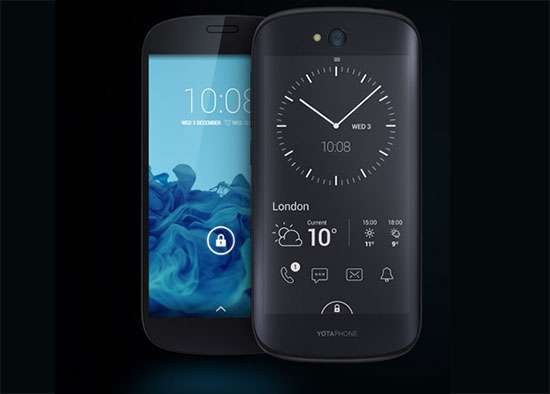 Welcome, dear readers, and set aside that last leftover-turkey sandwich for a short while as we explore the murky landscape of freshly announced gadgets in this week’s Gadget Dreams and Nightmares.

On the menu in our post-Thanksgiving edition are a pair of e-ink smart devices, wearables with a health focus, an intelligent home brewing kit, a kitschy kitchen product, and perhaps the most useless item we’ve included in this column to date.

As ever, these are not reviews, and the ratings reflect only my interest in using each.

The YotaPhone Strikes Back

I really liked the concept of the YotaPhone when I covered it last year. Now the dual-screen Android phone is striking again, with the sequel set to go on sale.

The YotaPhone 2 (pictured above) offers a couple of fascinating differences: The rear-facing e-ink screen is controllable by touch, and there’s an option to run full Android on the display as well. That’s an extraordinary way of rethinking what a smartphone can do in 2014.

I would be much more inclined to use a secondary e-ink screen for checking notifications than a smartwatch, and its capacity to run anything possible on an Android screen makes it that much more enticing.

Rating: 4 out of 5 Mirror Images

Sony’s Time to Smarten Up

Speaking of e-ink screens, Sony has a new watch that uses the technology in both the screen and the band.

The FES Watch is not a smartwatch, though that’s a possibility for future models. Instead, it’s an experiment, exploring the possibilities of e-ink in fashion.

I’m neither a watch wearer nor what anyone would call particularly fashionable, and yet color me intrigued. I’m compelled by the possibilities of a customizable on-the-fly watch with a battery charge that lasts longer than half a day.

As this and the YotaPhone 2 show, the e-ink trend is heating up, and I’m almost ready to hitch my wagon to it.

Rating: 3 out of 5 Changing Faces

A pair of portable smartwatches have loftier goals than measuring how many steps we’ve taken each day or barraging us with notifications.

I have few concerns about Embrace, which gets a hearty thumbs up from me. However, although Tzoa is trying something admirable, I fear it’s doomed to fail.

Crowdsourcing data is inherently positive, but the watch seems somewhat ineffective if the company can’t convince many, many people to sign up and feed in information about air quality. Learning about nearby air quality is great, but I can’t expect Tzoa to point me to an area where breathing is easier if it doesn’t have that data.

If only companies with great ideas like these could collaborate to combine their tech in the same watch. Otherwise, we’ll all soon be wearing watches up to our elbows.

Brewing a batch of beer at home, I’m told, is a tremendous pleasure. For the uninitiated such as myself, a device like Brewie seems like a solid entry point.

I’m not exactly certain why this needs a touchscreen and a smartphone app when it could crib off the technology used by the likes of Keurig, though. I don’t see why it would be unable to set a cooking process for a particular batch by reading a sensor or tag on the pouch of oats.

Certainly, my gripe is a First World Problem; I fail to understand technology that is supposed to make doing something easier adding a few extra steps.

Also, I’m not truly happy with having to wait at least five days before drinking the beer, so until technology solves the fermenting problem, inventors best hop to brewing up stronger ideas.

If this were not a crowdfunded project and one that were currently on shelves, The Keyboard Waffle Iron would make a solid holiday gift for that friend who spends perhaps a little too much time in front of a computer. A waffle maker in the shape of a keyboard sounds like the type of gimmicky item I’d normally hate, but I actually am a fan.

Certainly, if it ever meets its target and goes into production, at least 90 percent of these things will litter thrift stores within five years. I’m mostly just excited about waffles.

This is it. The lowest valley of the technology landscape. The fetid, gurgling mulch festering at the base of the tech bubble.

Why would a presumable digital native forego a valuable USB port for this? If you’re that in need of quick access to the hash key, why not reassign a useless button such as Scroll Lock to take up the slack or switch the language of one’s keyboard? Better yet, why not take an extra split second to hold down the Shift key and hit the hash button?

It will save no one any time whatsoever. I can only hope that this is secretly an elaborate prank, and that pressing the button causes one to be sentenced to an immediate, irrevocable lifetime ban from the Internet.