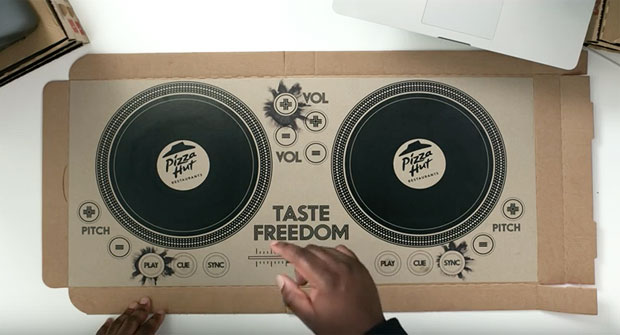 Welcome to Gadget Dreams and Nightmares, the column that sometimes takes a break from clinging onto the last few weeks of summer to rise its head above the parapet and survey the landscape of gadget announcements.

On the horizon this time around are a pizza box that doubles as two turntables, a gel touchpad controller for your arm, a backpack that charges your laptop, and a tattooing robot.

As ever, these are not reviews, mainly because I haven’t even seen these devices in person, much less used them. The ratings reflect only how much I’d like to try each.

Call it a gimmick if you must, but I’m very much into the idea of having a pizza box that doubles as a turntable.

Pizza Hut partnered with Novalia to make the box, which includes pitch and volume controls, a mixer, and touch-sensitive decks.

Using printed electronics, DJs can crossfade, rewind and even scratch. The box pairs with smartphones and computers using Bluetooth and works with DJ software.

I’m glad this is not a set of true physical turntables, as the idea of placing delicate vinyls anywhere close to a greasy pizza box makes me queasy. These are, of course, part of a promotional stunt, and Pizza Hut is only giving away five.

Still, this concept might have proved a fun, low-cost way for would-be DJs to take a tentative step into the world of music mixing. It’s neat, but I’m more likely to slap together a Spotify playlist for a party and be done with it.

Rating: 3 out of 5 Margarita Mixes

When I was a kid, it seemed every TV show and movie with a remotely futuristic setting would feature a character wearing a wrist or armband they could use to control the world around them or communicate with others. I thought it was the coolest thing imaginable: a wearable computer!

We’ve seen innumerable wearable smart devices over the last decade, of course, and now researchers have revealed how a gel-based touchpad on your arm could work.

The touchpad uses material akin to that found in soft contact lenses. Demonstrated uses so far include writing, playing games and creating music, but it seems like these are very early use cases for what could go on to become a fascinating, prevalent technology.

If the day comes when these touchpads can make me feel like I’m Buzz Lightyear and truly embrace my childhood again, great. As a way to manipulate the digital world around us and interact with our environments in new and exciting ways, it could be even better.

Rating: 4 out of 5 Forearm Functions

HP has created a backpack that can charge all of your devices, including your laptop, while you’re on the move.

Its battery pack can charge a smartphone up to 10 times, a tablet three times, and an HP laptop fully. I assume, however, you can find an adapter that will charge computers from other brands.

The backpack seemingly monitors and manages temperature, and it has ventilated pockets, which is useful if you prefer your back not to be on fire. Importantly, for travelers, it meets TSA regulations, so you won’t have to worry about stowing it with checked baggage.

I like the idea, though my 2011 laptop seemingly is incapable of charging its battery any longer, forcing me to stay shackled to a mains outlet whenever I am using it. Then again, maybe a backpack like this finally would force me to get a better, more modern laptop as well.

Rating: 4 out of 5 Battery Boosters

I don’t have a tattoo — nor do I plan to get any. If the time ever came around when I chose to have one, I would probably hesitate before allowing a robot to engrave permanent marks on my skin.

A design duo has created a robot that does indeed tattoo flesh. It would require the tattooee to hold a great deal of trust in the robot, as well as remain perfectly still, to avoid have bigger problems than an askew tattoo.

The robot needs a 3D scan of the skin area it’s working on (since no part of a human body is perfectly flat) and an artist to create the design using software.

There’s a demonstration video that shows the robot creating a perfect spiral on a willing victim — I mean, volunteer — so there’s a solid argument this machine could be better for intricate designs or those a freehand artist might find difficult.

Still, this seems too much of a leap for me. I’d much prefer to have a human tattoo me, someone who can react to my yelps and squirms as I finally realize my teenage dream of having a tribal design around my upper bicep. Or not.

Rating: 3 out of 5 Love/Hate Knuckles