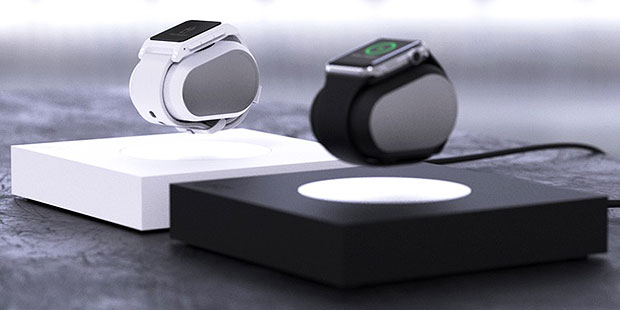 Welcome to Gadget Dreams and Nightmares, the column that is ready to take a breather, after finally upgrading to Windows 10, to peruse the latest announcements in the world of gadgets.

On our Start menu this time around are levitating smartwatch and smartphone chargers, a connected wine and cider maker, and a wearable with a safety focus.

As always, these are not reviews, and the ratings reflect only how much I’d like to actually try each item.

Walking in the Air

A pair of Kickstarter projects plan to place your smartwatches and smartphones on display in thin air.

Lift is an antigravity charger for Apple Watch and Pebble. The charger is wireless, so there’s almost no clutter involved (except, I suppose, when you have to charge the charger). The watch wraps around a portable battery pack, which the base keeps elevated using magnets and in a pinch can charge your smartphone on the go as well.

There’s a Pro version of the base, which you can use as an iPhone or iPad stand and charger. Meanwhile, there’s an optional smart lamp attachment called “Orb,” which illuminates when you have notifications and can float on the base itself when you’re not charging anything.

In the blue corner, we have OvRcharge. It has a magnet that attaches to the back of your phone to keep it suspended in the air. It can rotate your device for a neat little party trick, though you can stop the spinning if you find it distracting or irritating.

One big drawback: It needs a special case (seemingly available for the most popular smartphone models) to charge your phone, which will prove frustrating if you already use a smartphone case, as you’ll have to swap them back and forth.

Floating chargers are fundamentally neat, and the idea of having one’s most-used devices levitating in the air as they get some extra battery life is appealing. Lift has by far the more refined design — that magnet OvRcharge uses to keep phones afloat is somewhat cumbersome.

Yet my qualms about wireless charging remain: They typically waste energy, and I don’t see what’s wrong with just using a regular old charging cable. Plus, I’m not so sure I’d want to have my phone spinning around on display for my friends, drawing attention to exactly how scratched it is from the many times I’ve dropped it.

Rating: 3 out of 5 Magical Magnets

What’s better than turning delicious fruit into even more delicious alcohol? Controlling and monitoring the entire process using a smartphone, of course!

The Alchema lets you use an app to choose a recipe for your beverage of choice — wine, cider or mead — and walks you through executing it. That usually means combining fruit with yeast and sugar.

It will keep track of the quantities of each ingredient as you add them, so you won’t necessarily have to measure everything beforehand. Both the app and the device itself will alert you when the hooch is ready.

I’ve questioned why a lot of connected devices ever would need to connect to WiFi when they work perfectly fine on their own. Much of the time, making a device connected needlessly complicates matters.

Alchema absolutely should benefit from being connected, however, as I guarantee I’d forget about the fermenting booze until it was too late, and then I’d have to rely on store-bought cider instead.

Rating: 4 out of 5 Elevated Apples

RiskBand is a wearable with safety in mind. It provides you with a panic button of sorts that determines your location once you press it for three seconds.

You apparently can communicate with the GEOS response team (a partner of RiskBand creator Whereable Technologies) in one of more than 200 languages, so it can relay details of your situation to local authorities.

RiskBand also will transmit audio and video of your surroundings. The company stores this information securely in case it’s ever needed.

The battery lasts for around a day, and you can receive alerts when there’s possible danger close to you. Most appealing of all, it works without the need for a paired smartphone.

It’s a great idea — and if works as advertised, RiskBand should provide owners with greater piece of mind. It might prove especially useful when you’re alone in a new situation, such as mountain climbing or urban exploring, though the reliance on cell connectivity might make getting assistance in the former situation more complex.

I’d like to see an option that also alerts a trusted contact or two, ideally in a transmit-only mode so a concerned loved one doesn’t complicate communication with the response team. I just hope it works as advertised, as the smallest technical hitch could make reliance on a potentially life-saving device disastrous.

Rating: 4 out of 5 Safety Watches