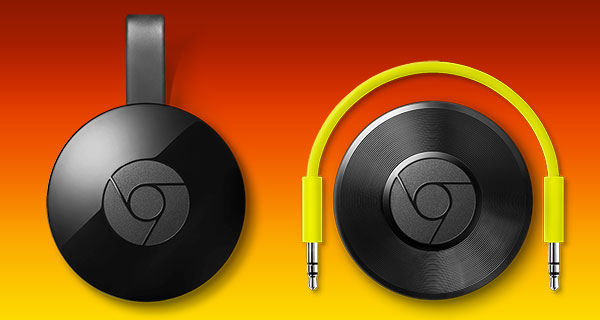 Welcome to Gadget Dreams and Nightmares, the column that gladly steps far away from presidential debates to voice partisan opinions on the latest gadget announcements.

On the rostrum this week is a slew of new Google devices: a refreshed Chromecast; another Chromecast for audio; and the company’s first completely in-house-created tablet. We also take a gander at a new LG smartphone that might cause double vision.

Note: These are not reviews. The ratings indicate only how much I’d like to use each item, and do not reflect how much of my life is wrapped up in Google services. That would rate at about a four.

Casting Stones in the Stream

Chromecast (pictured above, Chromecast Audio on the right) helps people easily stream whatever they want through their TV via a simple dongle. Now Google’s adding a splash of color to the device, along with a string of new features.

Instead of resembling a USB stick, Chromecast 2 is more like a colorful button, and Google says it is easier to plug into an HDMI slot. It’s built for speed, apparently, as it seemingly can stream videos faster and with less buffering.

It also can preload content — for instance, start downloading a movie — as soon as you open the Chromecast app, which Google also has refreshed.

On the content side, Chromecast users now can access Spotify and Showtime’s latest app, as well as stream NBA and Major League Soccer games.

What’s really useful is the option in the latest app to search for content across all the services you use. If you’d like to watch the latest season of Archer — to use my current obsession as an example — but don’t know where to find it, this universal search can help. It’s a great feature we’re seeing more often, including in the new Apple TV, so I’m glad Google included it here.

Meanwhile, there’s a new version of the device for music, called “Chromecast Audio” (pictured above with Chromecast). It connects to a 3.5mm auxiliary input, RCA jacks, or an optical input, and it can stream music from your favorite streaming services and your computer. It supports Google Play Music, Spotify, Deezer and BBC iPlayer.

What’s especially neat is it can play audio from most sources on an Android phone. So if you don’t have a TV and are streaming a movie to a tablet, you can cast the audio to your home speaker system and get an immersive surround-sound experience.

Chromecast already was a solid device, and these upgrades and the Audio version only enhance it. Best of all? Google’s keeping the US$35 price tag of the original Chromecast, which is far less expensive than most other streaming hubs. Thumbs up all around.

Rating: 4 out of 5 Cast Spells

Google has designed and built its latest tablet entirely in-house for the first time. The Pixel C runs Android rather than Chrome OS, and it has a keyboard that connects to the tablet using magnets.

It sports a 10.2-inch display, a Tegra processor, 3 GB of RAM, and 32 GB or 64 GB of storage. I’m curious why Google opted for Android over Chrome OS here, when the latter’s arguably more geared toward productivity. That’s what the tablet seems designed for, after all, given the keyboard, but perhaps Google wishes to keep laptops the sole domain of Chrome OS. 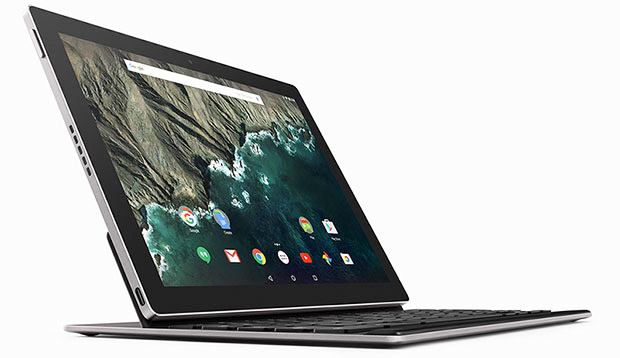 Keyboards from the same manufacturers as their accompanying tablets still aren’t great (look at both Microsoft Surface tablets, for instance), so hopefully Google’s figured out a way to make them better. It charges through the tablet’s inductive changer when it covers the screen, and it can store enough power to run for two months, which is impressive.

The base model is $499 and the keyboard $149, so it’s certainly in the higher end of Android tablets. I just have to wonder who this is really aimed at, because as impressive as it is technically, I’m not sure why I’d choose it over a less expensive tablet-and-keyboard combination, unless the keyboard is truly as good as Google thinks it is.

Rating: 4 out of 5 Mostly for the Keyboards

I hereby admit defeat in my war on selfies. I’ve disliked them for a long time, but since I can’t really explain why, it’s probably time to set down my torch and embrace them to an extent.

LG’s latest smartphone might help me in my reluctant acceptance, as it has not one but two front-facing, 5-megapixel cameras. LG’s justification for this monstrosity (OK, I’m really done now) is that two cameras snapping separate images at the typical 80-degree angle is better than a standard wide-angle lens when stitching the separate images together. I’m not entirely sure about that, but I wish the rear had dual cameras as well to give aspiring, smartphone-wielding filmmakers another option.

I don’t quite understand the Multi-view Recording feature that records through all three cameras at once, or why anyone would ever need to use that for any reason.

The front has a second display that can show the weather, time, date and battery status in a permanently on, low-power format. When actively using the phone, you can use this display for app shortcuts when you’re not on the home screen. I love this. I really like the idea of a secondary, always-on display on a smartphone, which is why I admire the Yotaphone so much. I’m really glad to see other manufacturers taking it on.

There’s a lot to like about the V10, and I’d like to test it out. I’m dithering between sticking with an iPhone or jumping to one of the latest Samsung Galaxy devices, but the V10 seems like an intriguing third option. As long as I can finally overcome my selfie aversion, that is.

Rating: 4 out of 5 Double Visions