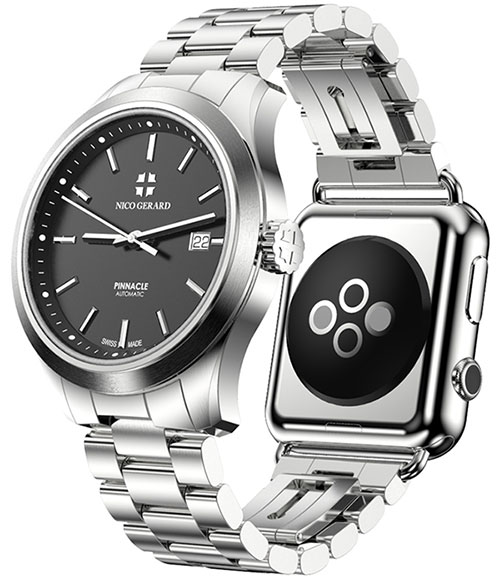 Welcome to Gadget Dreams and Nightmares, the column that dares to venture forth through the desert of the latest gadget announcements to find the oases of impressive ones.

In our watering hole this week are an ostentatious Apple Watch accessory, a toaster for your smartphone (yes, you read that correctly), a standalone Cortana button, and long-lasting printers.

The ratings for each product indicate only how interested I am in using them. Also note that these are not formal reviews, because some items currently exist only as a mirage.

A Watch for Apple Watch

In truth, the Nico Gerard Skyview Pinnacle (pictured above) is more an accessory than a gadget, but it’s so repugnant and ridiculous that it’s impossible not to include it this week.

Someway, somehow, watchmaker Nico Gerard found it prudent to create a watch that can accommodate an Apple Watch on its band, mounted where the clasp is located. It starts at US$9,300.

I have reservations about smartwatches in general, but the Pinnacle is colossally absurd. It looks ridiculous to have an expensive, standard-looking watch with an Apple Watch tacked on to the inside of the wrist.

Using the Apple Watch in this way would make one look like a latter-day version of TV spyMaxwell Smart talking into his shoe phone.

The Apple Watch is included in the price — that’s a nice little touch, but it’s not enough to turn this from ostentatious to classy.

Rating: 0 out of 5 Tedious Timepieces

Toast Away Those Germs

Smartphones are disgusting, caked in bacteria and unseen grime. I know I don’t take nearly enough care of my iPhone to ensure it’s as clean as it should be, especially when it’s stuck to the side of my face several times a day.

One project aimed at making our phones a touch more sanitary is the Green Toaster. Instead of slotting in bread or a bagel, this demands you pop down your smartphone to let it bake in UV light and remove much of that nasty bacteria.

I’m all for finding ways for us all to live more hygienically without compromising convenience, but I have a couple of reservations. First, I can’t understand why Green Toaster would need an accompanying app. It should be as simple as placing one’s smartphone inside the toaster and letting it do all the work.

Second, I enjoy gimmickry and kitchiness as much as the next person, but does it have to be a toaster? Surely there could have been a better form for this otherwise admirable project, particularly so it could be used on the go, where we are more likely to use those things called “mobile phones.” The clue’s in the name, there.

Windows 10 is only in the second week of its public release, but we’re already seeing some interesting dedicated hardware for the operating system.

One such gizmo is theSatechi BT Cortana Button, the purpose of which is relatively simple. Press it to activate Cortana, the Microsoft personal assistant baked into the new system.

While you can operate the helper by speaking the words “hey, Cortana,” if you’re like me, you’d prefer to not have your computer listening to what you’re saying while waiting for a two-word cue. Also, keeping voice activation on will drain your device’s battery more quickly.

It could prove useful if you’d like to fire off a question to Cortana if you’re busy in another part of the room — let’s say your hands are full while you’re cooking, and you need to ask about a measurement conversion.

Or, when Windows 10 arrives on Windows Phone, it could be helpful as a hands-free option in the car.

Chances are, I’d be just as likely to ask it for the time, or to play that one Taylor Swift mashup I really love, because that’s basically all I use Siri for when I’ve headphones on.

Rating: 3 out of 5 Pushed Notifications

Epson is sending its new EcoTank line of printers into the marketplace battle, armed with tanks of ink that will last for two years. The company is flipping the typical printer strategy of cheap hardware and expensive ink for an option that’s perhaps more palatable for most consumers.

It’s a bold move, especially since the ink packs aren’t entirely inexpensive at US$52 for a full set of black and colors. However, if it prints as many pages on a single fill as it promises — up to 4,000 monochrome and 6,500 color pages — it might be worth the deal.

I’m still more likely to run to the print shop on the rare occasion I need a hard copy of something. Unless, that is, I decide to print out a ton of flyers for the garage sale I’m holding to get rid of the printer I never use.