For Modest Mousepad, Simplicity Is Both Virtue and Vexation

Mousepad is a notepad-like graphical text editor for Xfce based on the Leafpad text editor that runs on any Linux desktop. It is very handy as a go-to tool when you do not have any heavy lifting to do. 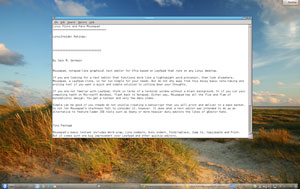 If you are looking for a text editor that functions more like a lightweight word processor (think AbiWord, for instance), then look elsewhere. Mousepad is far too simple for those needs. But do not shy away from this mousy basic note-taking and text file editing app if you want a swift and simple solution to jotting down your thoughts.

If you are not familiar with Leafpad, think in terms of a terminal window without a black background. Or if you cut your computing teeth on Microsoft Windows, flash back to Notepad. Either way, Mousepad has all the flim and flam of minimalistic design. You get a toolbar and very few menu items.

Simple can be good if your needs do not involve creating a manuscript that you will print and deliver to a mass market. Do not let Mousepad’s starkness convince you not to consider it, however. It does what a text editor was intended to do as an alternative to feature-laden IDE tools such as Geany or more heavy-duty editors the likes of gEdit or Kate.

Mousepad’s basic toolset includes word wrap, line numbers, auto indent, rind/replace, jump to, copy/paste and print. But it comes with one big improvement over Leafpad and other quickie editors.

Mousepad has a very useful Open Most Recent file menu option. I found this to be very handy for near-instantly loading a specific note file or to-do file that I use often without having to scroll through a navigation tree.

Complete support for UTF-8 text coding is included as well. Infinite Undo/Redo buffers by word and font selection support round out the limited feature set. It can also jump to a specified line number.

But do not forget that Mousepad has a very small footprint. When you add this to its stark menus, Mousepad is an ideal editing tool and note-taking app for use on small-screen laptops and netbooks.

Despite its stark appearance, Mousepad mimics some of the same useful though limited features found in Leafpad. For instance, in the Options/Fonts menu, Mousepad taps into the system fonts library so you are not stuck with a single default font.

A preview window in the Options tab shows what each font looks like in each of the four accompanying styles — Regular, Italic, Bold and Bold Italic. Similarly, point sizes range from 6 to 72.

Although Mousepad has a print function under its File menu, there is no print preview option. But that might not matter. When I tried printing a file, I got an error message saying that Mousepad could not open a pipe to process.

I have used the Xfce desktop with both the Ubuntu and Linux Mint distros and found little to no differences between Leafpad and the Xfce-designed Mousepad. Some distros a while ago replaced Mousepad with Leafpad to provide users with a more recently upgraded editor.

The last release for Mousepad was Jan. 3, 2008. The latest release of Leafpad occurred on Nov. 24, 2009. But with this type of simple editor, age means nothing.

Neither does the desktop environment on which you use it. Mousepad, just as with its cousin Leafpad, performs fine running on the Unity, Cinnamon, Lxde and KDE desktops, as well as Xfce.

MousePad is about as simple as a text editor can get. Its simplicity is what makes it such an ideal tool for quick note-taking and basic text editing.

But its limitations may force you to design some work-arounds or merely do without. As a personal writing or editing tool, this may or may not cause any trouble.

For example, for any work that goes beyond my eyes only, I routinely load the text file into any other application that has a spell-checking function. If you need some backup on English syntax, you might need a fully-service word processor to check grammar.

Do not look for a help file either. But I do not see that as a limitation. Mousepad is so easy to use that a direction file would be overkill.

One missing feature, however, that is a very noticeable is the lack of multiple file support. Without any support for tabs, you can only load one file at a time into Mousepad.

That can get in the way if you are comparing content or reading notes while you work on an active file. The only work-around, which can be a big inconvenience, is to load two or more Mousepad sessions and adjust their window sizes to fit onto the screen together.

Mousepad is a fast text editor that is easy to use for basic text editing and note taking. It is a tiny app that can stay minimized or hang around in a small window without getting in the way of system resources.