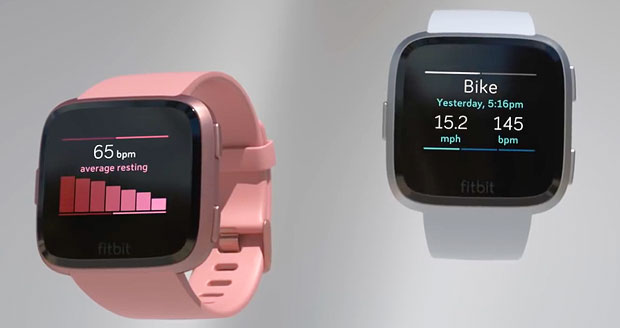 Fitbit on Tuesday added a new smartwatch to its wearables line with a pricetag of US$199.95.

The Fitbit Versa, which will reach global retail outlets in next month, will be the lightest metal smartwatch in the U.S. market. It includes a new dashboard that simplifies the way health and fitness data is accessed on the device.

Although the Versa’s operating system is Fitbit’s proprietary OS 2.0, the smartwatch can connect to an Android phone via an app.

That sets it apart from the Apple Watch, noted Ross Rubin, principal analyst at Reticle Research.

“That’s a good move when the Android Wear platform for smartwatches has some uncertainty surrounding it moving forward,” he told TechNewsWorld.

It’s been reported that Google intends to re-brand Android Wear as Wear OS. Although Google hasn’t commented on the rumor, it’s been suggested the company may want to distance Wear from Android, because Wear runs on more than Android devices.

Versa’s introduction appears to be a good move by Fitbit, especially given the tepid response by the market to its Ionic smartwatch last year.

“The Fitbit Versa seems to be a much better offering than the Fitbit Ionic and will likely help the company to enter further into the smartwatch market,” said Stephanie Lawrence, a research analyst at ABI Research.

“Updating the offering is likely to be good for the company,” she told TechNewsWorld.

“It helps them become more well known as a smartwatch provider, and to develop more devices in the future with different features and prices,” Lawrence pointed out.

“I give it a thumbs-up,” said Ramon T. Llamas, a senior research analyst with IDC.

Fitbit has been moving correctly and confidently in a direction where there’s still a lot of growth potential by sticking to its DNA, he told TechNewsWorld.

“Fitbit is staying faithful to its DNA by focusing on health and fitness, and not trying to be a Swiss Army Knife of smartwatches that attempt to do everything,” Llamas remarked.

“Rather than pitching itself as a maker of smartwatches, Fitbit instead appears to be positioning the Versa as a platform for cost-effectively extending the capabilities and value of its fitness-tracking solutions for existing and potential customers,” he told TechNewsWorld.

“That’s a good move since it plays well to the company’s strengths and its customers’ interests,” King said.

However, Fitbit will have a tough row to hoe in the smartwatch market, according to Carolina Milanesi, a principal analyst at Creative Strategies.

“I guess Fitbit is not ready to give up yet in trying to pursue the smartwatch market, which is solidly owned by Apple,” she told TechNewsWorld.

“Fitbit seems to have learned from the Ionic’s mistake. It has lowered the price point and made the design more appealing for women,” Milanesi said.

“While the Versa might sell more than its predecessor,” she continued, “I remain skeptical of Fitbit’s long-term opportunity in this space, as Apple is investing more and more into health, not just fitness.”

For $200, the Versa model is an improvement over the Blaze, Fitbit’s previous entry at that price point, observed Ben Stanton, an analyst at Canalys.

“The Blaze was a flop due to a poor industrial design,” he told TechNewsWorld.

“Smartwatches are not just fitness tools — they are also fashion statements. So with Versa, bringing premium features — like its aluminum chassis — down to $200 is a positive move,” Stanton explained.

“Of course, fashion is subjective — but in my opinion, this is a big step in the right direction for Fitbit,” he added.

Fitbit has pegged the Versa’s battery life at four days.

“Its FitbitOS is an incredibly light platform, which doesn’t require huge processing power,” he noted.

“Its software also focuses on blacks and dark colors, which helps Fitbit get the most out of its built-in battery,” Stanton continued. “The competition, namely Apple and Samsung, have more functional, heavy-duty operating systems — but sacrifice a bit of battery life to get there.”

The global smartwatch market has been experiencing strong and steady growth, and its future looks bright, ABI’s Lawrence noted. Shipments should reach 49 million by 2022, compared with 26 million in 2017.

“Growing numbers of consumer and enterprise users are looking to the devices for numerous reasons,” she said, “particularly access to smartphone features from the wrist, as well as information — such as calendar notifications, what work to be completing, and directions,” she said.

However, even greater growth is expected for hybrid smartwatches — products like the Fossil Q and Nokia Steel — which have the look of an analog watch but some smartwatch functionality. Eighty million hybrids will be shipped in 2022, according to Juniper Research, compared with 14 million in 2017.