Firefox 3.6 Tweaks Are Mostly Under the Hood

Promising faster performance and a bevy of new features, Mozilla on Friday released the first beta version of its Firefox 3.6 browser.

Built on the Gecko 1.9.2 Web rendering engine, the new version contains numerous improvements for developers and users, Mozilla said, including support for what it calls “personas,” improved responsiveness and faster startup time.

The free, open source Web browser is available for download in versions for Windows, Mac OS X and Linux in 53 different languages.

The alpha version of Firefox 3.6 was released in August. Most add-ons have not yet been upgraded by their authors to be compatible with Firefox 3.6 beta, Mozilla said.

Mozilla’s personas are lightweight, easy-to-install and easy-to-change skins for Firefox. With built-in support for those add-ons, Firefox 3.6 enables users to change their browser’s appearance, or theme, with a single click.

Also included in the new version is a feature that alerts users to plug-ins that are out-of-date, minimizing the risk of crashes and security vulnerabilities. Whenever a user loads a page that uses an out-of-date plug-in, Firefox sends a warning message and provides a link to the latest version of that software.

Open, native video can now be displayed full screen in the new version, and support has been added for both poster frames and the Web Open Font Format (WOFF).

The new version — which was code-named “Namoroka” — includes a host of changes for developers as well, such as support for image rendering and multiple background images.

Particularly since the launch of Google’s Chrome, there has been an increasing focus on speed and performance in the browser arena, RedMonk analyst Stephen O’Grady told LinuxInsider.

“One of the defining characteristics of the Chrome experience is speed,” O’Grady explained, and “the Mozilla folks have done a good job of responding to that, both in Firefox 3.5 and 3.6,” he said. “Both versions are noticeably quicker.”

Mozilla has also been continuing to build out user enhancements, O’Grady added, “ranging from the aesthetic — such as personas, where you can reskin the user interface — to the more subtle, but potentially more significant.”

As an example of the latter, O’Grady cites the Ubiquity plug-in, which is integrated in the new release and makes the browser “more programmatically accessible,” he explained.

Firefox currently holds the No. 2 spot in browser market share, with just over 24 percent, behind only Microsoft’s Internet Explorer, which holds 64.64 percent, according to researcher Net Applications.

Safari, Chrome and Opera hold the next three spots with 4.42, 3.58 and 2.17 percent, respectively, according to Net Applications’ October data.

“I have three browsers, and I don’t think I’m alone,” John Barrett, director of research with Parks Associates, told LinuxInsider. “I suspect there’s a lot of people who have multiple browsers.”

Because the software is free, and “not too onerous on your system,” it can be useful to have more than one installed, Barrett explained.

Many people have a preference for one or another. However, “I find most sites have done all the proofing for Internet Explorer,” he said, “but may not have the kinks worked out for the others.”

Globally, version 3.5 of Firefox has been downloaded some 422 million times, according to Mozilla.

While “I wouldn’t call it revolutionary,” O’Grady concluded, Firefox 3.6 is “a very nice incremental upgrade.” 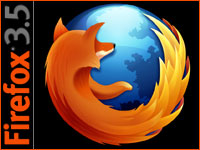 Firefox 3.5 Streaks Onto the Web