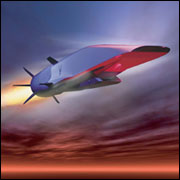 The United States Air Force’s third test flight of an X-51A Waverider hypersonic aircraft failed spectacularly Wednesday when it crashed seconds after being launched from a B-52 bomber. 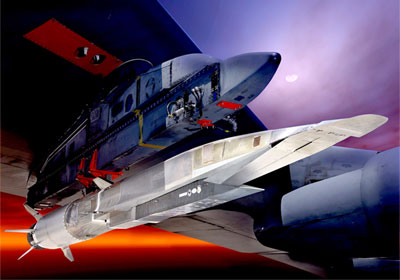 The X-51A Waverider, shown here under the wing of a B-52 Stratofortress, is powered by a Pratt & Whitney Rocketdyne SJY61 scramjet engine. It is designed to ride on its own shockwave and accelerate to about Mach 6.

“Everything was going correctly except for that small thing,” Bill Hancock, a public affairs officer at the 88th Air Base Wing at Wright-Patterson Air Force Base, told TechNewsWorld. “We had a good burn of the booster rocket and it separated from the scramjet, but it was the fin that caused the problem.”

Program officials will evaluate the flight to figure out exactly what went wrong.

The X-51A was launched from its carrier, a B-52 Stratofortress bomber, in mid-air as planned.

It was released at about 50,000 feet over the Pacific Ocean Point Mugu Naval Air Warfare Center Sea Range. Its solid rocket booster was supposed to fire for 30 seconds, accelerating the X-51A to approximately Mach 4.5 and then be jettisoned.

The X-51A’s ignition sequence then is supposed to begin burning ethylene and transition to jet fuel in a 10-second time span. As planned, the scramjet engine is then supposed to kick in, accelerating the X-51A even faster. The fuel load and flight profile are to provide for a four-minute engine burn before the vehicle splashes down into the Pacific and is destroyed.

However, the latest test flight was cut short when a fault in one of the X-51A’s control fins went wonky within 16 seconds, before the scramjet could fire. The X-51A is officially listed as “lost.”

The Lowdown on the X-15A

The X-51A project is a joint effort between the USAF Research Laboratory, which is located at Wright Patterson Air Force Base; the Defense Advanced Research Projects Agency (DARPA); Pratt & Whitney Rocketdyne; and Boeing.

The X-51A project’s specs set the cruiser at about 25 feet in length. It consists of a modified solid rocket booster from a U.S. Army tactical missile, a connecting interstage, and the X-51A cruiser itself. The heart of the system is an SJY61 supersonic scramjet engine designed to burn JP-7 jet fuel.

The cruiser is designed to ride its own shockwave. As a body’s Mach speed increases, the distance between it and the shock wave it creates shrinks. The X-15A uses the shock wave as a lifting surface.

The X-51A has small, controllable fins. It was made using mainly standard aerospace materials such as aluminum, steel, inconel and titanium.

X-51As are designed to hit hypersonic speeds. Four X-51As were built, and the one fired off this week was the third. None of the test flights so far have reached the goals set by the project, in one way or another.

You Know It Don’t Come Easy

The X-15A’s manufacture is highly complex because of the large number of extreme variables it has to cope with.

“Every one of these things is hand-built,” Rob Enderle, principal analyst at the Enderle Group, told TechNewsWorld. “They’re very complex, and they’re going so incredibly fast that any kind of a minor error could result in catastrophic problems.”

“One of my favorite quotes from the engineers working on the project is that ignition of the scramjet is like lighting a match in a hurricane,” the USAF’s Hancock said.

For example, hypersonic speeds on the order of flying 600 nautical miles in 10 minutes may provide the ability to accurately engage a long-distance target very rapidly.

It’s not clear whether the X-15A project will survive after the last cruiser is tested. “We’re short on funds and they’ll probably pull the funding on the project,” Enderle speculated.