Fed Ruling May Bring Flocks of Buzzing Drones to US Skies 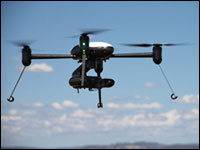 The use of commercial drones in U.S. airspace is essentially legal, at least for the time being.

National Transportation Safety Board Judge Patrick Geraghty this week nixed the Federal Aviation Administration’s attempt to levy a US$10,000 against Raphael Pirker for using a remote-controlled glider to capture video footage for an ad.

Since Pirker had used the drone for commercial purposes, he violated regulations that required such commercial use of unmanned air systems to first receive approval from the agency, the FAA argued.

However, Geraghty ruled that there was no binding FAA rule that banned flights such as Pirker’s for commercial purposes, and that the FAA overreached by using aircraft regulations to mandate model aircraft usage.

The FAA has never regulated model aircraft, and its legal basis for governing commercial drones — a 2007 policy notice — was not binding, claimed Pirker’s lawyer, Brendan Schulman.

Geraghty agreed, ruling that the policy notice the FAA used to ban commercial drones was not enforceable because it had not been drafted as part of a formal rulemaking process.

“The FAA wants to regulate commercial drones as they have the ability to infringe in airspace that may already be occupied or in use,” Steve Abdu, executive vice president of technology and training at Expert Aviation Consulting, told the E-Commerce Times.

“Some of these drones are big enough to take down a commercial airliner. Besides airspace infringement, there are many other considerations — such as privacy, civil rights, who owns the airspace over a given property, etc,” he noted. “On the flip side, there are many pluses [for using commercial drones] as well: agricultural mapping, real estate, package delivery, airborne still and video photography, and many others.”

The FAA is reviewing the decision.

Pirker’s flight took place at the University of Virginia Medical Center in Oct. 2011, and the FAA proposed its fine the following April, claiming that Pirker operated the drone in a “careless or reckless manner so as to endanger the life or property of another.”

He reportedly flew the drone within about 50 feet of pedestrians, around 20 feet of a crowded street, and around 100 feet of an active heliport at the center. The FAA claimed one person had to dodge the drone to avoid being struck by it.

It’s not the only time a drone enthusiast has faced legal repercussions over the use of the aircraft. A teen in France is embroiled in legal issues after using a drone to shoot footage of the city of Nancy from the air. Nans Thomas endangered others and did not have proper training or air authority approval to use the craft, according to prosecutors.

Several companies have explored using commercial drones as part of their business model. In December, Amazon announced it was developing a system to deliver merchandise to customers by drone. CEO Jeff Bezos said Amazon Prime Air would allow Amazon to make deliveries within 30 minutes of an order being placed, in some cases. The company plans to start making such deliveries within five years.

The FAA had already planned to integrate drones into U.S. airspace system per the FAA Reauthorization and Reform Act of 2012. The process had been scheduled for completion by 2015. It is not yet clear what effect the NTSB ruling will have on this process.

“The FAA could propose new rules — but would have to follow procedure and issue an NPRM (Notice of Proposed Rule Making) and invite all interested parties to participate in the issuance of any new ruling,” Expert Aviation Consulting’s Abdu said. “It doesn’t mean that they’ll listen, but they do have to have open hearings on whatever they propose.

Meanwhile, the FAA in recent weeks has started looking for ways ” target=”_blank”>to expedite limited commercial usage of small drones in the U.S. following industry demands, according to The Wall Street Journal.

It is not yet clear whether the NTSB has plans to make future recommendations regarding commercial drone regulations based on safety concerns.

“It’s hard to predict what recommendations will be developed and at what point,” NTSB spokesperson Keith Holloway told the E-Commerce Times. “Our recommendations are based for the most part on our investigations.”