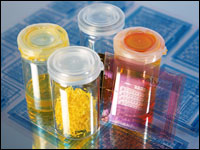 Not all polymers are plastics, but all plastics are polymers. And organic (carbon-based) polymer plastics, known mostly for being insulators, in some cases make excellent conductors and semiconductors.

The term “all-polymer semiconductor” (with electrical conductivity intermediate between that of an insulator and a conductor) sounds almost like an oxymoron. Plastic is generally considered a poor medium for conducting electricity and an excellent material to resist the flow of electric current and magnetism, which is why it’s used as insulation for cables, casings and sockets.

And an all-polymer visual display unit sounds equally dubious, since the stimulated emission of light is the domain of inorganic materials such as doped metal phosphors. But light-emitting polymers (LEPs), which involve an electroluminescent conductive polymer that emits light when connected to an external voltage, are used as a thin film for full-spectrum color displays in laptops and handheld computers.

“Polymers are the key enabler in electronics, from semiconductor manufacturing, to chip packaging, to circuit boards, to display materials, to memories, to solar and wind energy devices,” explained Jeffrey T. Gotro, president of InnoCentrix, a California-based consulting firm that services companies using polymers in products.

InnoCentrix specializes in supporting customers who use polymers and composites in electronic applications such as die attach paste and film adhesives (both conductive and non-conductive), underfills and encapsulants for semiconductor and board-level packages, multilayer circuit board laminates, pre-impregnated composite fibers and composites, disk drive coatings and polymers for storage technology applications.

“Of course, long-term applied research needs to be coupled very tightly to the voice of the market to ensure that the right technology is being developed to meet the emerging market needs,” Gotro told TechNewsWorld. “This is what I call ‘customer-pull innovation’ versus ‘technology push.'”

Polymers are gigantic chain-like molecules that contain hundreds or even thousands of repeating units (“poly” means “many,” “mer” in chemistry means a “repeat unit”). The repeating fundamental molecular elements that make up polymer chains are called “monomers.” Polymerization is the linking process of converting a monomer or a mixture of monomers into a polymer. Plastics consist of long polymer molecules.

“Polytronics” (polymer electronics or organic electronics) is a branch of electronics that deals with conductive polymers, plastics or small molecules. It’s called “organic” electronics because the polymers and small molecules are carbon-based, like the molecules of living things. This is as opposed to traditional metal electronics, which relies on inorganic conductors such as copper or silicon.

Technological developments in the electronics and semiconductor industries have led to the creation of electroactive polymers (EAPs) — polymers that change shape on the application of voltage. The biggest application for EAPs lies in their future use as actuators and sensors, which in turn opens up applications in the fields of electronics, medical, sensing and solar energy generation.

According to a Feb. 2010 report “Global Electroactive Polymers Market (2009-14)” from Research and Markets, the global EAP market was at US$1.7 billion in 2008 and is expected to be worth $2.78 billion by 2014, growing at a compound annual growth rate (CAGR) of 8.3 percent, mainly due to the already existing demand for new applications being commercialized in the next five years. The North American market is expected to account for nearly 65 percent of the total revenues.

Demand for polymers and conductive polymers in the electronics industry will grow at a projected CAGR of 26 percent, from an estimated $1.9 billion in 2010 to about $5.9 billion in 2015, according to a Jan. 2011 report “Electronic Chemicals and Materials Market” from BCC Research in Wellesley, Mass. Most of the projected growth is attributable to conductive polymers.

All of this is, of course, amounts to only a fraction of worldwide semiconductor revenues estimated by market research firm iSuppli at $304 billion in 2010 (up from $229.5 billion in 2009). And silicon remains the principal component in the majority of semiconductor devices, most importantly integrated circuits (microchips).

But brittle, inflexible, toxic, chemical-filled silicon has to be purified in refineries before any money can be made with it — and that is a very difficult and expensive process.

As a result, chip manufacturers are always looking for viable alternatives to silicon, which is beginning to share its dominance of the semiconductor world with a range of materials based on polymers. Enter the era of organic microchips.

In a world of polymer electronics, virtually any company could become a chipmaker. A plastics fab plant does not need to be ultra-clean and expensive like silicon fab plants that require low humidity and sophisticated dust-free vacuum systems. Another advantage is that these new plastic circuits can be manufactured in a roll-to-roll apparatus like that used in producing flexible solar cells. Thanks to inks made from conductive and semiconductive polymers, it will soon be possible to print circuits on almost any surface using an inkjet printer or offset press. 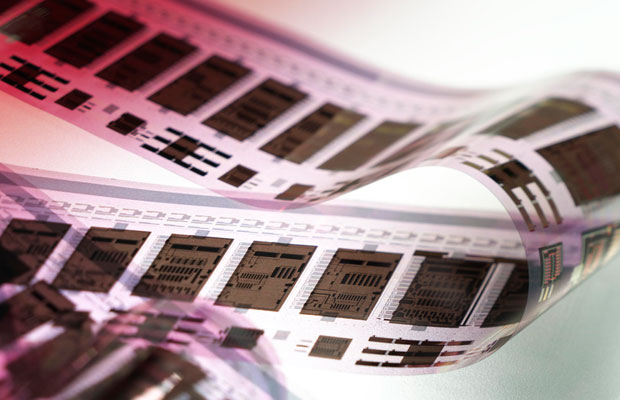 Developers must first overcome some technical challenges related to the use of various synthetic polymers in high-tech applications. Plastic transistors have nothing like the switching speed of those made from crystalline silicon. Other potential poly downsides include possible flammability, thermal effects and the toxicity of gaseous byproducts of pyrolysis.

Even so, business considerations can make technical issues seem like the least of the problems.

Plastic Logic utilizes the simplest invention in plastic electronics — a single transistor that switches a particular pixel on or off. The real potential in this technology is in creating plastic integrated circuits capable of complex functions.

In recent years, Plastic Logic focused on backplanes for flexible e-reader displays, particularly backplanes for electronic paper — a display technology designed to mimic the appearance of ordinary ink on paper.

While e-paper is typically thin and flexible, a rigid display results when it is combined with a glass-based amorphous silicon backplane. Plastic Logic developed a flexible backplane technology, thus enabling the display, and therefore the reader device, to become flexible, thin, light and robust so it feels more like a sheet of paper.

Plastic Logic’s Que proReader was to be the first digital reading device made out of plastic electronics and designed specifically for professional use. The company raised more than $200 million and used much of that to build a plastic electronics factory.

However, in August 2010, Plastic Logic canceled its Que electronic book reader due to an inability to get manufacturing off the ground. In addition, a price war was occurring in the electronic books market.

On Jan. 18, the state-owned Russian Corporation of Nanotechnologies (Rusnano) announced a $700 million investment in Plastic Logic.

“Flexible plastic electronic displays will provide another major milestone in how people process information,” said Georgy Kolpachev, Rusnano’s managing director. “Entering this new disruptive segment at the stage of its inception gives Russia a chance to win a leading position in the global market of future electronics.”

“Because high-tech devices are no longer manufactured for the most part in the U.S., this entire business sector has disappeared from the U.S. economy,” Hauser told TechNewsWorld. “This has put many molders out of business and affects the entire supply chain. For instance, the material suppliers are no longer building new plants in the U.S. — they are now being built in China, India, etc. So many jobs are gone and will not return.”

The arrival of conductive polymers on the high-tech scene has been a long time coming.

Naturally occurring “biopolymers” include wood, animal and vegetable fibers, bone, horn, starches, cellulose, latex, even the deoxyribonucleic acid (DNA) inside cell nuclei and the membrane that separates one cell from another in all living things, as well as messenger RNA which makes possible proteins, peptides and enzymes.

Then there’s the family of artificially manufactured industrial, synthetic polymers, the main man-made component in many common plastic materials. Produced commercially on a very large scale and having a wide range of properties and uses, synthetic polymers are formed by chemical reactions in which large numbers of monomer molecules are joined sequentially, forming a chain. Plastics and other synthetic polymers play an essential role in virtually every product.

The first electrically conducting polymers were discovered in 1977 by Hideki Shirakawa, Alan MacDiarmid and Alan Heeger. These scientists demonstrated that polyacetylene was electrically conductive and that by doping it with iodine vapor, they could enhance its conductivity by eight orders of magnitude, taking its conductance close to that of a metal. Today, polyacetylene is used, among numerous other applications, in the foil packaging for computer components to dissipate static.

That simple discovery kick-started research into a whole new technology based on conducting and semiconducting plastics. The maturation of the field of conducting polymers was confirmed by the awarding of the 2000 Nobel Prize in Chemistry to Shirakawa, MacDiarmid and Heeger “for the discovery and development of conductive polymers.”

By the late 1980s a number of other polymers had been shown to exhibit a piezoelectric effect or were demonstrated to be conductive. The poly-march was on.

The U.S. has a number of polymer business clusters connected with major universities.