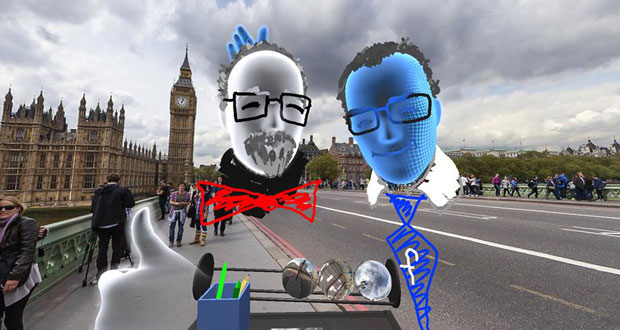 Facebook on Wednesday demonstrated at its F8 developer conference how socializing could take place in a virtual world.

In that space, through the use of 360-degree photos, they visited London and the hangar where Facebook’s unmanned aerial vehicle is housed, drew together with virtual pens, and took selfies and posted them to their Facebook news feeds in the real world.

“This is just the beginning of our exploration into how people can connect and share using today’s VR technology,” Booth said.

“There’s a lot more work to do and many more challenges to solve,” he continued, “such as how to better model ourselves within VR, so we can elevate presence from a disembodied head and hands to a more expressive model of a person.”

“The avatars — the graphical images of the two guys doing the demo — were crude, but they were able to change the environments they were in, interact with virtual objects and respond to each other’s avatar,” he told TechNewsWorld.

“People began talking about the death of distance with unlimited mobile phone calls,” Sterling added. “This is the death of physical boundaries that separate people.”

However, before real socializing can occur in virtual space, computers are going to have to get better at reading humans.

“Humans are really good detecting the subtle cues that other humans put out. Computers are not,” Gartner Research Director Brian Blau said.

“We have to teach computers to have those kinds of perceptual capabilities,” he told TechNewsWorld.

The Facebook experience is managed largely by Facebook’s algorithms. That could end once VR enters the equation.

“You’ll be able to go past a curated experience,” said Cliff Raskind, an analyst with Strategy Analytics.

“You can draw your own conclusions rather than have something served to you,” he told TechNewsWorld.

“It’s going to be fantastic that you can share experiences and visit people without traversing huge swathes of geography in a way that was never possible before,” Raskind added.

The social VR demo at F8 reveals some valuable insights into the motives behind Facebook’s purchase of VR headset maker Oculus for US$2 billion in 2014.

“They bought Oculus because they recognized the potential of the technology,” Sterling said. “There are multiple applications for it, one of which is some sort of virtual reality version of Facebook, or a broadly defined social network based on virtual reality technology.”

Dark Side of VR

As with any immersive technology, there’s opportunity for abuse, and social VR is no exception.

“Many technologies can be used for good purposes or can be abused,” Sterling noted.

In addition, there will be opportunities for abuse of users.

“Every kind of abuse you see on Facebook today can be amplified in the virtual world,” Raskind said.

What’s more, even virtual worlds may need to be managed, which could lead to more problems.

“These managers will be getting into the realm of what governments do,” Raskind noted. “There will probably be debates about how much control should be exercised over your virtual freedoms.”

When can we expect to see virtual interaction supplanting face-to-face interaction?