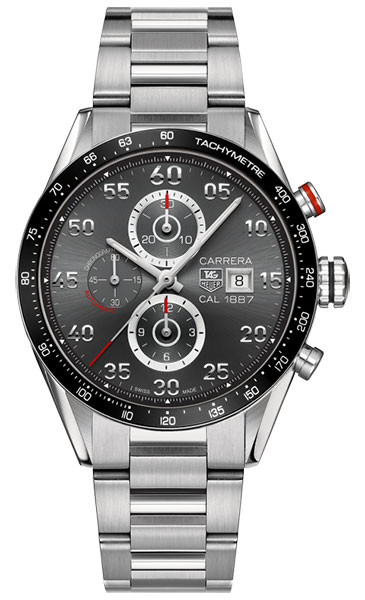 By the end of this year, Apple fans won’t be the only ones who can flash a smartwatch worth thousands of dollars on their wrist; Android aficionados will be able to do the same.

They were skimpy on the details, but various leaks and media reports suggest that the device may look like the Tag Heuer Carrera (pictured above), a watch available in several designs priced from $2,500 up.

How this will play out in the market remains to be seen.

Tag Heuer is part of the Mot Hennessy Louis Vuitton (LVMH) luxury products group, which includes the Bulgari and Sephora brands, among others.

Its watch sales were hit by retailers’ cautious purchasing behavior, and Tag Heuer refocused on its core offering, according to LVMH’s 2014 financial report.

“Tag Heuer brings its Swiss watchmaking know-how and tradition,” Google spokesperson Liz Markman told TechNewsWorld. It “will design and manufacture the watch, which will reflect the Tag Heuer heritage of Swiss design and quality.”

Intel “will be providing an SoC platform, and Google will provide the Android Wear platform and its software expertise,” she continued.

It’s All About the Opportunity

Intel has been working hard to get into the mobile market. In 2011, it got Google to agree that all future versions of Android would be optimized for the Intel Atom-based line of processors.

At IDF 14 in September, Intel announced the commercial availability of Intel Edison and its Analytics for Wearables (A-Wear) developer program.

Android smartwatches abound. The Pebble and Samsung Galaxy Gear, for example, are priced between $50 and $350. The Galaxy Gear was offered for just $150 at Best Buy earlier this month.

It’s still unknown whether the Apple Watch will turn the wearables market on its head, as many expect. It will sell for between $350 and $17,000 and will begin shipping April 24.

The top-end prices sparked a tweet from actress Anna Kendrick about the Apple Watch being “the new gold standard in douchebag detection.”

Still, that speaks to a salient point: Apple’s brand strength is so great that it can charge as much as a small car would cost for a device that would need to be recharged regularly, and could only be used by one person.

“The mechanical beauty of high-end watches comes second only to the allure of their craftsmanship,” said Ryan Martin, an analyst at 451 Research.

“This generally means emphasizing factors such as design, branding and build quality,” he told TechNewsWorld.

A Case of Hubris?

The big problem appears to be the smartwatch’s identity as a gadget rather than fine jewelry.

Smartwatches “are functional products and are not likely to be seen as luxury image statements the way that Rolex and Patek Philippe are perceived,” said Larry Chiagouris, professor of marketing at Pace University.

“Sure, a few thousand people with $10,000 to spend might buy [luxury smartwatches], but that’s probably the total potential market,” he told TechNewsWorld. “After that, the price points will have to come down [and] the functionality will have to improve.”

For smartwatches to take off as a successful luxury product, the real luxury brands “will have to be ready to put their logos on them,” Chiagouris said.

That might well happen, because traditional watchmakers have been hit hard by the advent of digital watches — which are relatively indestructible, much cheaper, more accurate and more functional.

“Moving into the smartwatch side of the business,” said 451’s Martin, “is a bold yet ultimately necessary step for incumbent watchmakers.”