The convenience of using your smartphone to store, stream and curate your music collection — or simply stream music from online, personalized radio stations like Pandora — doesn’t mean you need to sacrifice your home stereo system for the dubious quality earbuds that came with the phone.

The investment you’ve made in the stereo gear is as valid as is it was when you bought it. Just because you’ve retired the original media that you were using with the stereo doesn’t mean a phone, with its solid state music player, can’t slide into the mix to provide quality audio in much the same way as a CD, cassette, or vinyl did back in the old days.

Streaming music from your phone to your stereo system involves buying a few parts; making some hardwired, or wireless connections; and configuring the phone and stereo.

Determine the method that you’d like to use to connect the phone to the home stereo system. Recent smartphones have short-range wireless Bluetooth radios that are compatible with a standard called “A2DP,” which is used to transmit stereo audio channels between a phone and a Bluetooth receiver. They also have 3.5 mm audio out jacks, commonly used for tinny headphones that can be used to output via cables.

The Bluetooth method will be the most convenient and will allow you to control music 10 yards from the stereo — including from the sofa. The wired method will be of slightly higher quality and cheaper. The winner of the age-old debate, fidelity versus convenience, is your choice.

Other brands are available — just make sure they handle A2DP by checking the documentation. Or, just purchase a 3.5mm to RCA-type cable. That’s a headphone-like cable with red and white plugs at the end. 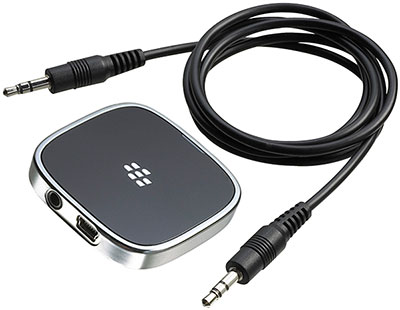 Plug the red and white plugs of the purchased RCA-type cable, or the RCA-type cable that came with the Bluetooth receiver, into a spare input on the amplifier section of your home stereo setup. Try to use the jack labeled “Aux In” or “Auxiliary In.” Don’t use “Phono,” because the phono jack is a special jack designed specifically to handle the vagaries of a turntable.

Pair the Bluetooth receiver that’s now connected to the stereo with the phone by looking for “Manage Connections” or “Wireless & Networks,” or similar in the phone’s “Settings” menu. Choose “Set Up Bluetooth,” or similar, and then “Search.” Choose “BlackBerry Stereo Gateway” or “Bluetooth Music Adapter,” or similar when it appears on the display.

Type “0000” in the passkey box, or whatever passkey is specified in the Bluetooth receiver’s documentation. The phone and receiver will pair. If they don’t, try this again allowing less time between when you press the “Pair” button on the Bluetooth receiver and instigating the pairing process. Many adapters limit the time. Usually red and blue alternating LED illumination on the receiver indicates “Pairing” mode is live.

Set the volume on the stereo to a comfortable level and turn it on. Choose the “Auxiliary” source you set up. Then choose a media output on the phone — for example, a Pandora stream. The music from the phone will be sent to the stereo either via the hardwired cable, or wirelessly, and it will be output through the stereo speakers.

Is there a piece of tech you’d like to know how to operate properly? Is there a gadget that’s got you confounded?

Please send your tech questions to me, and I’ll try to answer as many as possible in this column.